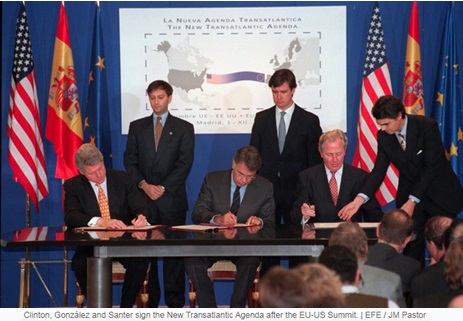 On December 22, 1999, the Potomac Institute for Policy held an event that was broadcast on C-Span.  The focus of the forum was on terrorism with the idea that the new millennium would be a trigger for radical groups and lunatics to wage a global campaign of terror.  One of the speakers at the event was Fraser Cameron, Head of the European Union political section.  The following is a video clip of Mr. Cameron’s remarks.  Note that he talks about the New Transatlantic Agenda and Europol.

The irony of the new millennium date rollover is that while there was national planning and mobilization to prevent terrorism, Fraser Cameron talked about the cooperation with the Palestinians – training them to detect and fight terrorism as part of the European Union’s strategic planning against terrorism.  The leader of Palestine at that time was Yasser Arafat, the world’s best known terrorist.  Maybe the theory was “train the terrorists and they will come”?

The New Transatlantic Agenda constituted the final stages of stitching together the political and military organizations for global governance.

The UN always does programming in decades so we could call 1990-2000 the Decade of Treason and Betrayal.  The race to the finish line began in Houston in 1990 with the G8 summit.  The University of Toronto maintains an archive of agreements made by the leaders of the G7/G8 member nations.  The 1990 Houston Economic Declaration reveals the central planning for the economies of the members.  The following is Item one from the Introduction:

1. We, the Heads of State and Government of the seven major industrial democracies and the President of the Commission of the European Communities, meeting in Houston for our annual Economic Summit, celebrate the renaissance of democracy throughout much of the world. We welcome unreservedly the spread of multiparty democracy, the practice of free elections, the freedom of expression and assembly, the increased respect for human rights, the rule of law, and the increasing recognition of the principles of the open and competitive economy…

3. We are mindful that freedom and economic prosperity are closely linked and mutually reinforcing. Sustainable economic prosperity depends upon the stimulus of competition and the encouragement of enterprise–on incentives for individual initiative and innovation, on a skilled and motivated labor force whose fundamental rights are protected, on sound monetary systems, on an open system of international trade and payments, and on an environment safeguarded for future generations…

The month prior to that meeting, George H.W. Bush kicked off the negotiations for the North American Common Market (NAFTA) with the announcement of the Enterprise of the Americas initiative which is also mentioned in the G8 report.

Formalized Relations between the U.S. and EU

As with the G7/G8, agenda items are negotiated by unelected people within the Executive Branch and decisions are made by leaders at a summit of leaders.  In 1995, at the summit in Madrid, Spain, the leaders agreed to The New Transatlantic Agenda. Annex 10 of the summit report has the text.  The University of Pittsburgh has an archive of documents and reports from the Summits.   On that webpage, there is a link to a PDF copy of the full report on The New Transatlantic Agenda.

The following are significant excerpts from the Agenda along with the goals:

We share a common strategic vision of Europe’s future security… We are committed to the construction of a new European security architecture in which the North Atlantic Treaty Organisation, the European Union, the Western European Union, the Organisation for Security and Cooperation in Europe and the Council of Europe have complementary and mutually reinforcing roles to play.

. . . As to the accession of new members to NATO and to the EU, these processes, autonomous but complementary, should contribute significantly to the extension of security, stability and prosperity in the whole of Europe. Furthering the work of Partnership for Peace and the North Atlantic Cooperation Council and establishing a security partnership between NATO and Russia and between NATO and Ukraine will lead to unprecedented cooperation on security issues.

Our economic relationship sustains our security and increases our prosperity. . . Our cooperation has made possible every global trade agreement, from the Kennedy Round to the Uruguay Round. Through the G-7, we work to stimulate global growth. And at the Organisation for Economic Cooperation and Development, we are developing strategies to overcome structural unemployment and adapt to demographic change.

We are determined to reinforce our political and economic partnership as a powerful force for good in the world. To this end, we will build on the extensive consultations established by the 1990 Transatlantic Declaration and the conclusions of our June 1995 Summit and move to common action.

Today we adopt a New Transatlantic Agenda based on a Framework for Action with four major goals:

Promoting peace and stability, democracy and development around the world. Together, we will work for an increasingly stable and prosperous Europe; foster democracy and economic reform in Central and Eastern Europe as well as in Russia, Ukraine and other new independent states; secure peace in the Middle East; advance human rights; promote non-proliferation and cooperate on development and humanitarian assistance.

Responding to global challenges. Together, we will fight international crime, drug-trafficking and terrorism; address the needs of refugees and displaced persons; protect the environment and combat disease.

Building bridges across the Atlantic. Together, we will work with our business people, scientists, educators and others to improve communication and to ensure that future generations remain as committed as we are to developing a full and equal partnership.

Within this Framework, we have developed an extensive Joint EU/US Action Plan.

The feature image of this article is from the signing event in Madrid Spain on December 3, 1995.  In connection with the adoption of The New Transatlantic Agenda, the members agreed to a large number of measures within the overall areas of cooperation as defined in the Joint EU-U.S. Action Plan.  A copy of the Action Plan was found on the European Union External Action website.

NATO was established in 1949 as a political and military alliance.  The following is an excerpt from a website called “Difference Between“.

NATO is an intergovernmental military alliance that has its substratum on the North Atlantic Treaty signed on 4 April 1949. The Headquarters of NATO are in Brussels, Belgium. The NATO has its membership allotted to 28 states. The official languages accepted by NATO are English and French.

Videos produced by NATO on their organization

AmCham article on the 20th anniversary of the New Transatlantic Agenda