Home Genome Global Health for All 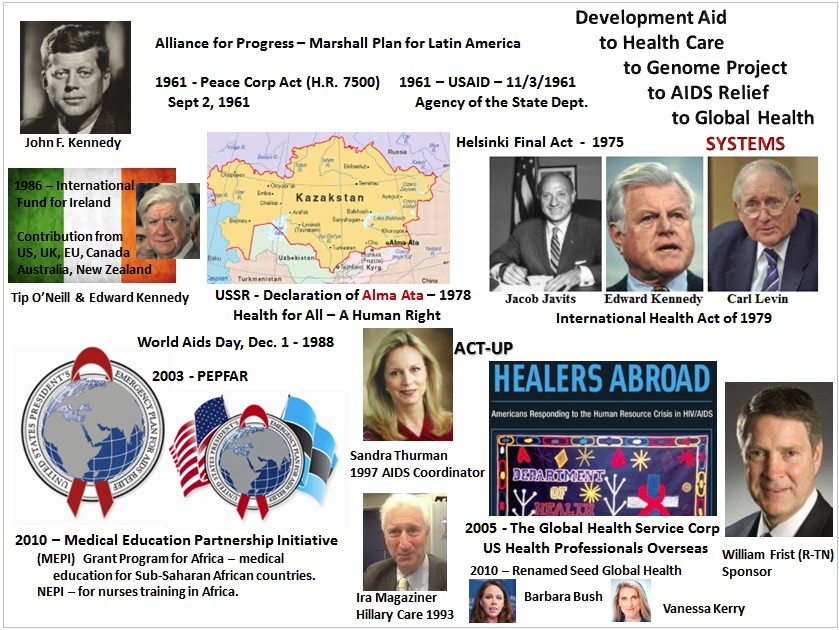 Global Health for All

On March 17, 2018, Jerome Corsi, Charles Ortel and the host of a program called Grand Torino did an interview about the Clinton Foundation scams in Ireland.  While they were following the money, behind every dollar and every word, there were connections to the global health extortion racket and the planning for crimes against humanity.

1990 was the kick-off year for the New World Order but there were a lot of preparations prior to 1990 obviously.  The New World Order is the end of the nation-state replaced with a global technocratic system of management enabled by the integrated global telecommunications system  (i.e. Internet) as the central nervous system – the corporate backbone as it were.

Global health is a high tech system of telemedicine, just-in-time supply chain, electronic medical records to allow medical research, experimentation using personalized medications (every patient is a potential lab rat), differential pricing, computer-aided prescribing, robotics and more.   It’s state of the art technology that requires an equally high tech infrastructure – clean water, reliable electricity, good transportation systems and most importantly a good telecommunications system with high speed internet capable of transmitting high volumes of high resolution images and video.  It requires highly trained people both in the medical field and in the IT sector to install and maintain the systems.

The people who develop the technology and the people who write the software and maintain it are among the most highly paid people in world along with people in the medical field.   What has happened with the simple idea of providing health care to people in the lesser developed countries is that world leaders have mandated that the most costly sectors of the developed world’s economy will install their high cost systems under a charity model behind the curtain of economic development using the threat of biological warfare as an “incentive“.

Since the tech sector and medical fields are profit-making fields, the costs for this corporate and government sponsored “global charity” are funded through incremental price increases to consumers in the developed world.  It’s a form of hidden taxation imposed by profit-making corporations. (Fair Tax).  The following is an excerpt from a white paper published by the International AIDS Vaccine Initiative:

Tiered, or differential, pricing permits developing countries to receive favorable prices, but it requires that the global public sector support appropriate market segmentation and that commercial firms receive a reasonable return on their investment in industrialized countries.

In the white paper, the author talks about a reliable stream of money flowing to this chemical Manhattan project.  Using the collective national systems developed for health care, it’s not difficult to see how a global health tax could be applied to the cost of health care for American consumers.  We pay the highest price in the world for drugs.  Are we subsidizing the world for drugs?   I’d say yes.

The U.S. doesn’t even provide health care for it’s own people – and yet it is providing massive funding through a myriad of funding streams to build a global chemistry-based infrastructure for application on human populations.  The massive funding is distributed among many budget categories including the military so when Congress is asked about how much money we are providing for foreign aid, they can say truthfully, a very small amount.  But if one digs deeper into other categories of spending like programs at the universities and hospitals, they will find huge pots of money being spent but not for the benefit of the American people.

In the story told by Charles Ortel, Bill Clinton and his family are just celebrity crooks stealing money but what the exposure of Clinton’s criminality did do was to pull back the curtain enough to see the bigger corruption –  the Global Manhattan Project 2.0 – Chemical Warfare.

Governments around the world have been corrupted with the idea of building global governing systems – the health system being only one of them.   As the Ranbaxy Pharmaceutical company’s corruption shows, the real crimes won’t be about money.  The real crimes will be crimes against humanity – the most heinous of all crimes a government and its people can commit.

There are several layers to cut through to discover the true nature of what is going on in terms of “charity fraud” because it isn’t just NGOs and it isn’t just charity fraud.  It’s a worldwide conspiracy of treason and chemical warfare executed by the largest multinational corporations, the Foundations, medical institutions and the United Nations.  As someone called it recently, the Medical Industrial Complex. 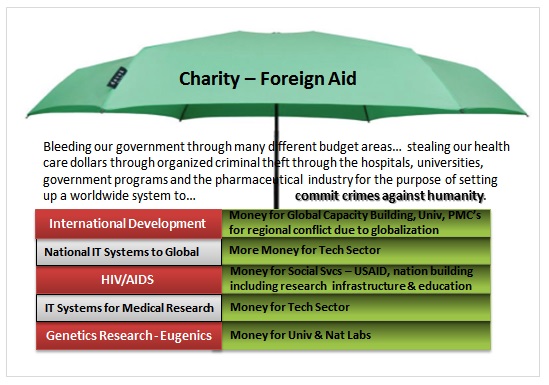 AIDS Research: A Cover Story for the Human Genome Project and Crimes Against Humanity through the Global Health Network?

The Human Genome Project (HGP) was initiated by the Department of Energy.  “The DOE considered the initiative part of its ongoing work in molecular biology largely focused on mutations and other biological effects…”.   The Timeline for the HGP is found on the Oak Ridge National Laboratory website.   In 1988 the DOE signed an MOU with the NIH to develop the research infrastructure for the study of the human genome – mapping the DNA.  The research infrastructure included computers and telecommunications network between government, university and private sector medical research facilities, etc.  You can read more about that HERE.  Having started down this research path because of Charles Ortel’s work on the Clinton Global Health Initiative, it makes me think that the Human Genome Project – mapping the genes was a cover story to enable massive spending on AIDS research and the building of the global medical system.  (Note:  I said medical because it’s not about health regardless of the impetus for initiation).

In order to integrate the new information provided by Charles Ortel into the information that I have on the Human Genome Project and the re-engineering of our health care system related to Global Health and terrorism, I had to split up their interview into several separate topic areas.  Over the next several days, I’ll be posting the pieces to this puzzle.  In the meantime, take a look at this montage because these are just a few of the elements of the story and it gives you an idea of the timeline.