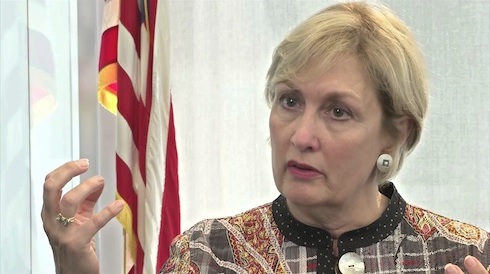 Jamie Gorelick – Queen of the Swamp

In March of 2017, in an article written by Jim Simpson, he poses the question:

The answer to the question is:

As Deputy Attorney General, Jamie Gorelick was appointed to be a member of the steering committee for the Commission on Critical Infrastructure.  Sandy “The Burglar” Berger was also appointed.

“The purpose of the President’s Commission on Critical infrastructure Protection is to bring together the combined forces of the government and private sector to develop a strategy for protecting and assuring the continued operation of this nation’s critical infrastructures,” the White House statement said. “These include telecommunications, electrical power systems, gas and oil transportation, banking and finance, transportation, water supply systems, emergency services (including medical, police, fire, and rescue) and government services.”

Everything stems from 1990, the reunification of Germany and the transfer of the disease of communism to the U.S.

The new Transportation System – announced in 1990.

The DOD-DOJ agreement for Joint Development of Technology.

Government partnered with business to “protect” the infrastructure.

All of the elements of the New Transportation System correspond to elements for Control of our Critical Infrastructure.

Integration of the military into the civilian sector – so that you pay twice… once in the DOD budget and once again on the civilian side.  And you are controlled by paramilitary police.

[P.S. I was going to write it nicely, but I’m sick of writing about it.  How many times can I explain it before I lose my fricking mind?]