Between 1990 and 1991, our world was turned upside down but the dogs didn’t even bark.   George Herbert Walker Bush began the long march to the New World Order (NWO) when he announced the Enterprise of the Americas initiative which was the beginning of the end of the United States as a nation-state – if they succeed which is looking pretty good for the NWO traitors – and pretty grim for the American people.

In subsequent research, it was determined that the intermodal commerce zones were actually inland ports – international ports.  The inland ports become zones of foreign occupation when cities identify themselves as sanctuary cities. 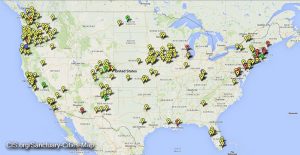 The transformation of an area within a city from being U.S. soil to becoming an inland port under a “regional governance” comprised of public sector officials and representatives of the largest employers in the area is layered.  It begins with a cross-jurisdictional agreement for Enhanced 911 service. Sheriffs, city police, fire officials sign an agreement for cross-jurisdiction “cooperation” which necessitates the creation of a district that includes the multiple jurisdictions which is overseen by a district “governing board”.  The district and the regional governing board eliminates citizen control of the entities participating in the agreement.  In other words, GOVERNMENT is moved out of the reach of the people being governed.

The inland port zones are networked with telecommunications systems for international commerce.  The system as a whole – including seaports is a networked system of transportation hubs for global commerce.

As I’ve done this forensic analysis on the changes to our government to enable and facilitate elimination of our borders and foreign occupation of our cities, I’ve often wondered (screamed actually) where in the hell is our military intelligence?  The CIA?  Is anybody watching this?  Is anybody working on the defense of this country? Why aren’t they seeing this strategy in progress?   A big part of the answer is found in a 1990 report by the Carnegie Commission on Science, Technology and Government.  The report is titled,  report:  New Thinking and American Defense Technology.

The new statement draws on earlier work by the Commission’s Task Force on National Security, chaired by William J. Perry. The membership of the task force that contributed to the statement differed slightly from the group responsible for preparing the first edition. The members of the enlarged task force were:

* The statement was prepared and approved before the nomination of Dr. Perry to be U.S. Deputy Secretary of Defense and Mr. Woolsey to be Director of Central Intelligence.

Lynn Cheney was on the Board of Directors of Lockheed and Lockheed Martin from 1994 through 2001.

Note:  this was incomplete but I needed to publish it for a short version of the story on TVOI News.