Robert “Tosh” Plumlee and recently retired Marine Colonel Matt Smith-Meck were guests today on the Alex Jones program.  They were there to report that there is going to be another shipment of guns going to Mexico.  Just as in Fast and Furious they will end up in places like Benghazi.  Plumlee and Smith have been trying to get the attention of members of Congress to have them investigate.  John McCain dismisses the reports as “conspiracy theory”.

I believe I know the answer at the root level because I’ve been studying it for years.  The answer to the question is that there is an undeclared war for control of international ports for the global transportation system.  The reason it’s not obvious to the casual observer is because the definition of an international port goes beyond seaport to include land-based ports for landlocked locations within countries.   Any place where two or more modes of transportation (intermodal) come together has the potential to become an international port under the global system but the best ports are the ones that are located where the most efficient access to centers of commerce.

The significance of a location being included as an international port under the global transportation system should be obvious.  If a business wants to engage in global commerce, the place to be will be at a global transportation hub (port) – especially as the globalists collapse nation-states and increasingly exercise control over commerce – globally.

The minimum requirements to become an international port is that:

In 1988, the Carnegie Foundation established a Commission to produce a presidential transition report.  The Commission did not disband after the first report.  They continued with recommendations for a new world that would incorporate scientific and technical knowledge.

In 1990 which is considered to be the end of the Cold War, the Carnegie Commission on Science, Technology and Government produced a report titled New Thinking and American Defense Technology (updated 1993 edition).  The idea was to study the problem of a military built for big war in a new world of big science, big technology and “global order”.    The short form of the story is that they thought that the machines of big war were essentially obsolete and that what was needed in the “new world” was a re-organized and greatly scaled back military that would depend more on technology than 20th century war machines.

I need to skip quite a bit here that I will fill in when I have more time but essentially the plan for our military was that the Navy would become a global force.  The army would transition to be the technocrats – with a System Administration force and special forces as needed and the Marines would become the force for domestic defense. (per Thomas P.M. Barnett – to the best of my recollection at the moment.  See Below)

The defense contractors who traditionally worked to produce the machines of big war were re-purposed to produce dual use technology for civilian use.   The dual purpose was to provide “security” as well as global trade facilitation and “environmental protection”.

The plan for U.S. security was embedded within an economic plan for global sales of technology for environmental protection and efficiency.  The locations selected for environmental protection and efficiency – not coincidentally correspond to transportation hubs – globally.   In a computerized world of supply chain and “just-in-time”, whoever controls the ports controls commerce and drilling down through the logic.. ultimately life because war is no longer synonymous with guns and bullets.

Dick Cheney was the Secretary of Defense when this plan was adopted for the military and DARPA.

Bill Clinton and Al Gore worked closely with the Russians and the Chinese during the Clinton Administration.  The objective as stated in all the documentation was to build a Global Information Infrastructure (GII) – which was a bait and switch.  The original plan was for a National Information Infrastructure (NII).  To accomplish the GII, they transferred state of the art technology to China, Russia and any other country that wanted to buy it – thereby giving away any technological advantage the United States had.

I suspect the Russians and Chinese gave a clue that they knew what was up when Ron Brown’s airplane crashed into a mountain and his autopsy revealed that he died from a bullet to the head – but that’s just a guess.

The point is that globalization – which actually began during the administration of George H.W. Bush set off global races for commodities and control of transportation via international ports – sea and inland.  The surprise for us was that while the CIA and USAID were building the infrastructure for the global telecommunications in foreign countries, Communists (The BRICS) were establishing beach heads in the U.S. 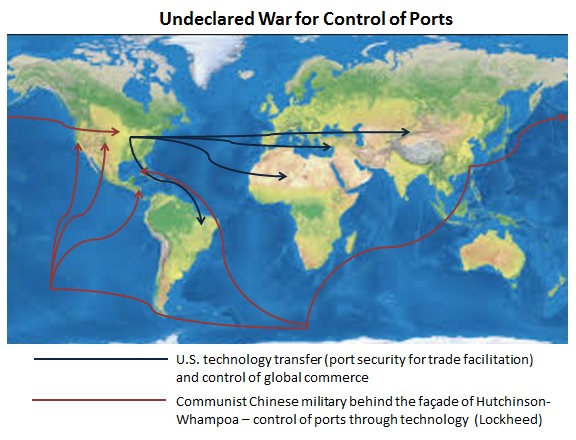 And the gun shipments through Mexico?   They are being shipped to locations designated for the establishment of international ports.  Those locations require significant modernization including upgrades to telecommunications, utility infrastructure – water, electricity and sewer but the presence of foreigners is not always welcome as was the case in Benghazi and Afghanistan and all that government contracting money draws undesirables.

For more information on this, go to NewsMax.com   and search on the name   “Hutchinson-Whampoa”.  They have some great stories from early 2000’s.

I started to write a longer, better written post than this one but I got distracted so haven’t finished it – but it will give a little more background.

Here is some early research – when Dick Cheney announced that the NAFTA Superhighway was an urban legend.  We couldn’t let him get away with that.  Scroll down to see the diagram of trade facilitation systems.

Dispelling the Myth of the Urban Legend

Sorry that this is a quick and dirty but I have other things I’m working on.

The Military in the 21st Century
Thomas P. M. Barnett