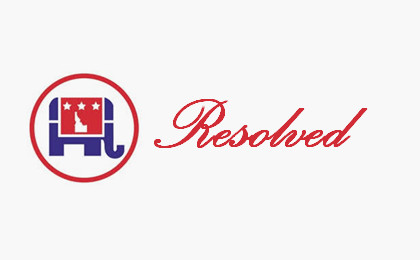 The GOP State Committee reported today that a resolution opposing refugee resettlement in the United States passed today.  The Resolution was submitted by:

WHEREAS, America currently admits roughly 70,000 foreign nationals under the refugee resettlement program every year; and

WHEREAS, our current “chain migration” policies multiply these numbers as immigrants are allowed to bring in even their non-nuclear family members such as siblings, parents, and adult children; and

WHEREAS, refugee access to welfare on the same basis as a U.S. citizen has made the program a global magnet; and

WHEREAS, House Homeland Security Chairman Michael McCaul (R-TX) has stated that the Obama administration plan to resettle Syrian refugees in the U.S. is a “serious mistake”, that the administration is creating a “federally funded jihadi pipeline” into the U.S., and that the plan should be stopped until safeguards are in place; and 8 Idaho Republican Party Official Document IDGOP 2016

WHEREAS, Rep. Brian Babin (R-TX) has introduced the Resettlement Accountability National Security Act (H.R. 3314) which seeks to suspend refugee resettlement to America until economic costs are analyzed and national security concerns are put to rest,

THEREFORE BE IT RESOLVED, that the Idaho Republican Party thanks Idaho Rep. Raul Labrador for cosponsoring HR3314, and recommends that Idaho Rep. Mike Simpson also co-sponsor HR 3314; and

BE IT FURTHER RESOLVED, that the Idaho Republican Party recommends that Idaho Senators Mike Crapo and Jim Risch develop and co-sponsor a companion Senate bill; and

BE IT FURTHER RESOLVED, that the Idaho Republican Party requests the Idaho State Legislature to pass legislation or a joint resolution stating that Idaho will not resettle any more refugees in our state or disburse state or federal funds for new refugees’ financial housing, medical, education or other support until the economic cost evaluation and national security terms listed in HR 3314 are met.