Yesterday TVOI’s new North Idaho reporter Shari Dovale alerted us to a story in the Idaho Statesman concerning Lt. Governor Brad Little’s effort to find a new director for the Idaho Department of Commerce.  Little said that a new director must “sell Idaho”.

Back in 2010, Governor Butch Otter was going on trade missions to China to “sell Idaho”.  He had a plan called Project 60 in which he intended to increase the state’s GDP from $52 billion to $60 billion.  The Director of the Idaho Department of Commerce Director Don Dietrich said, “the Chinese are looking for a beachhead in the United States”.  He was “selling Idaho” too.   It was discovered when a 23-person delegation from Communist China arrived to look at investment potential of an economic development zone called The CORE in Meridian, Idaho.   At the time research began on The CORE, almost nothing was known by this writer concerning “zones” and because of that, the zone was dubbed a Trojan Triangle.

It was also discovered that the method for increasing the GDP by selling Idaho was through the EB-5 investor visa program.  The EB-5 visa program basically sells American citizenship though public officials prefer to describe it differently – a rose is a rose.

The U.S. Department of Commerce designates an area called a “Targeted Employment Area” – a TEA zone when the unemployment in the area is at least 150 percent of the national average.    An EB-5 regional center receives the money from the sale of American citizenship and they determine where to invest the money.  The following are the EB-5 regional centers in Idaho.

Idaho Global Investment Center, LLC.    This outfit is listed on the USCIS as doing business in Idaho but the website listed on various websites could not be located.   IGIC has some info.

The Invest Idaho Regional Center was initialized in 2009.  The CEO is Rod Meyer. 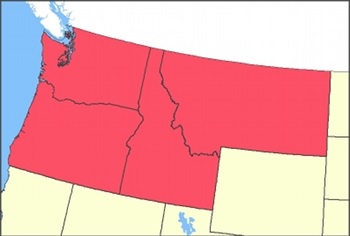 That map has the American states that are part of the Pacific Northwest Economic Region (PNWER) that was discovered a few years ago.  Obviously, the State of Idaho violated the U.S. Constitution with this one:

It seems logical that the PNWERC is connected or perhaps an extension of the PNWER.

The whole EB-5 sellout of American citizens through the sale of American citizenship begins with the U.S. Department of Commerce designation of an area as a Targeted Employment Zone –  a TEA Zone.  In 2010, when I began the research on The CORE in Meridian, the TEA Map for Idaho for 2010 was found.  The entire state of Idaho was a TEA Zone.  It’s now 2015 and Idaho is still a TEA Zone as shown on the right.   [Update August 19, 2016 – Idaho is still a TEA Zone – map added].