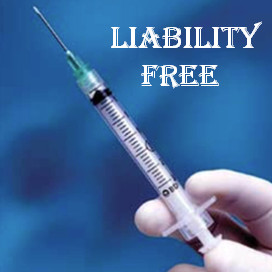 [Note: The legislature did vote to give civil liability protection to people who follow orders for this alleged emergency.]

On August 5, 2020, Idaho’s Governor Brad Little called for a Special Session of the Legislature beginning August 24th for the purpose of considering a civil liability safe harbor for anyone who, in good faith acts to ameliorate a disaster or emergency.  The panel on the right has an excerpt from the proposed legislation for the liability protection. Section 3 appears to declare and extend Brad Little’s emergency declaration.  The emergency is this alleged COVID pandemic.

On May 15, 2020, President Trump announced Operation Warp Speed to accelerate delivery of a vaccine that was still in the development stages – not tested, not approved for a disease caused by a virus that they claimed was a pandemic but that was a pandemic in name only – not a pandemic in reality.

The second speaker after Donald Trump is Moncef Slaoui.

On June 18, 2020, the Senate Armed Services Committee held a confirmation hearing for Lieutenant General Daniel R. Hokanson, ARNG to be General and Chief of the National Guard Bureau and Gustave F. Perna, US Army for Reappointment to the Grade of General and to be Chief Operating Officer, Project Warp Speed.

Hokanson is an Army General in charge of the National Guard Bureau.  That is an “unholy” merging of national and state power that will enable the coming crimes against humanity.   Posse Comitatus prevents the federal government from using the military for domestic operations against our own people.  Either shortly before or shortly after September 11th, there was an attempt to repeal posse comitatus (I remember it and was horrified by the idea).  Ultimately, it was unsuccessful but with the Army taking effective command of the National Guard, they overcame the prohibitions of posse comitatus.

During the confirmation hearing, Project (aka Operation) Warp Speed was described.  The mission of the National Guard was to build a facility for filling vials of vaccine for COVID and to design the logistics operation for mass distribution of a vaccine that wasn’t even approved.

When the Governor announced the special session of the legislature for the purpose of providing civil liability protection for anybody who cooperates “in good faith” with mitigation for the pandemic that isn’t a real pandemic, plus the planning for Operation Warp Speed, it’s obvious that they are setting up for a mass vaccination program using the national guard as well as private sector medical personnel.  It seems to this writer that the liability protection would be for them – not for ordinary businesses as some media outlets are trying to message.

Yesterday, I got word that the Idaho State House Representatives voted to pass House Concurrent Resolution 1 (HCR001) ending the state of emergency.  The next step was for the Senate to vote in the affirmative on the Resolution and the nightmare of this public health tyranny would be ended.  The problem was that the President Pro Tempore of the Senate was refusing to introduce the resolution for a vote so I wrote a letter to senators giving them the reasons why they should vote to end this sham emergency.

Excerpt from the Draft Legislation on civil liability protection during the state of emergency:

… For the purposes of this section, “person” means any entity recognized in this state and shall include but not be limited to an individual, corporation, limited liability company, partnership, trust, association, city, county, school district, or other unit of government, the state of Idaho and any agency or subdivision thereof.

…SECTION 3. An emergency existing therefor, which emergency is declared to exist, this act shall be in full force and effect on and after its passage and approval.

I assume you love your families, your friends and some of your constituents. The issues you will be voting on during this special session of the legislature will have a direct and personal effect on them as well as the rest of the population of Idaho. It doesn’t matter how much money you have. Nor does it matter how much power you have. You will not be able to shield the people you love from the chemical terrorism that is about to be unleashed on the American population via the mass vaccination program that is being planned.

Why do I call it chemical terrorism? If you’ve paid the slightest attention to the information on the COVID-19 dialectic, you know that it is not being driven by the medical field. It’s being driven by the Public Health system. When the media and the “experts” can’t keep a straight story, it should be a big clue for you that something is not right. The reason they can’t keep the story straight is because COVID-19 is not about a medical issue. It’s about technology and rapid vaccine development and the logistics of delivery. See:

According to a report on NPR, (Questions About How Crash Program Is Picking Coronavirus Vaccines To Back, June 12, 2020) there are more than 100 vaccines being developed worldwide. The challenge to them was rapid development of a vaccine reducing the timeframe from years to months. Of course, the testing stage – if one could call it that has been truncated and with reduced populations. Efficiency and speed of delivery is a good thing when you’re talking about widgets. When you’re talking about a chemical cocktail for mass vaccination of a population, it’s a galactic understatement to say it’s imprudent.

The NPR Pharmaceuticals Correspondent, Sydney Lupkin said that five companies got contracts from HHS. One of the companies, Moderna got a head start because they are working with Dr. Anthony Fauci, Director of the National Institute of Allergy and Infectious Diseases (NIAID). The man who Donald Trump selected to head up Operation Warp Speed is Moncef Slaoui. Slaoui was on the Board of Directors of Moderna on May 1, 2020. Apparently he resigned his position as a Director to serve as the head of Operation Warp Speed. In addition to being on Board of Moderna, Slaoui’s bio included this: “He currently serves as Chairman of the Board of Galvani, a bioelectronics-dedicated biotech co-owned by GSK and Verily, an Alphabet company.” The Galvani Bio company website proclaims: “We are developing the expertise to place tiny devices inside the human body. These will be programmed to read and modify electrical signals passing along nerves in the body”.

In a New York Times article titled, Trump Vows Vaccine by End of Year, and Mobilizes Military to Help dated May 15, 2020, they reported that Moderna already had an experimental coronavirus vaccine that had just entered Phase 2 of clinical trials to determine if it was effective. How prescient of them.

Welcome to Moderna. We believe mRNA is the “software of life.”

Every cell in the body uses mRNA to provide real-time instructions to make the proteins necessary to drive all aspects of biology, including in human health and disease.

Given its essential role, we believe mRNA could be used to create a new category of medicines with significant potential to improve the lives of patients.

We are pioneering a new class of medicines made of messenger RNA, or mRNA. The potential implications of using mRNA as a drug are significant and far-reaching and could meaningfully improve how medicines are discovered, developed and manufactured.

Moderna was founded by Derrick Rossi, an Assistant Professor in the Stem Cell and Regenerative Biology Department at Harvard Medical School.

When they say they are developing a new class of medicines they are talking about genetic engineering – modifying our DNA.

Dr. Carrie Madej made a video, “Human 2.0”? A Wake-Up Call To The World that is available on youtube explaining what Moderna is doing and the dangers associated with it. The most significant point of what she says is that it is experimental and they don’t know the long term affects are going to be.

The best weapon of all is one that the enemy entices you to use on yourself. This planned mass vaccination program with experimental vaccines led by companies engaged in genetic engineering is such a weapon. We don’t know what pressures Governor Little is under to do the things he’s done. It’s your job to relieve him from those pressures and at the same time, protect the population of Idaho by voting to terminate the state of emergency declaration and then remove the authority of emergency powers from the governor’s office.

It shouldn’t need to be said but I’m going to say it anyway because willful blindness to the insanity going on in this country is epidemic since this COVID-19 dialectic was declared. Liability protections won’t save anybody from charges of crimes against humanity and that’s where we’re headed if you don’t put a stop to this now.

Moncef Slaoui, Board of Directors, Moderna, May 2020