Home Refugees-TF The Meeting before the Meeting 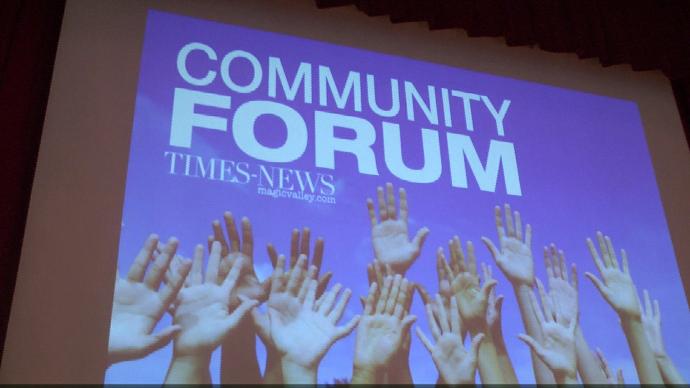 The Meeting before the Meeting

The Twin Falls Times-News arranged for a meeting between opponents of the refugee resettlement program and four of the panelists for the CSI Community Forum on Refugee Resettlement. This meeting was held at the Times-News office at 4:00 pm on Tuesday. Unfortunately Rick Martin was unable to attend the meeting so he invited Adrian Arp and Vicky Davis to stand in for him. Julie Ruf of Act for America was also in attendance.

There was one other gentleman that I can’t recall his name and I can’t find my notes. He didn’t say anything anyway so it doesn’t matter much.

Larry Bartlett’s focus was primarily on the security issue. He talked about their system for checking on people declared to be refugees. They are interviewed, fingerprinted, photographed, etc. The government also has computer systems for several agencies – DOD, DOJ, DHS, etc. that have – data bases of known or suspected terrorists and criminals. Apparently the system worked reasonably well for Iraqi refugees because when Iraq was captured, all of their records were found intact. However, some terrorists did slip through because they didn’t have police records but the DOD did have their fingerprints on some IEDs that they set up for American soldiers to “find”. Those Iraqi “refugees” were found living on the public dole in Kentucky.

Of course we know that Syria is a failed state so there are no records for Syrians but that little detail did not diminish Bartlett’s optimism that their system is working. The interview combined with the running of searches on virtually empty databases is the process. If they don’t get a hit on the search (as would be expected in an empty database), the refugee is good to go.

Bartlett wasn’t worried at all about the security of Americans. His concern is for the safety of the refugees.

One of the most revealing things that Bartlett talked about was supply chain for refugee resettlement. Of course he didn’t use the term supply chain but that’s what he was talking about – a steady stream of refugee inputs to keep the refugee resettlement network intact and growing. That should scare the hell out of any red-blooded American because the resettlement network is a function of the United Nations and the Socialist International and they are deeply embedded in our government at this point.

The most important question in the afternoon meeting from this writer’s point of view was “how many of these refugees are economic migrants?” Bartlett assured us that none of them are economic migrants. They all fled their countries for fear of persecution. Interestingly, then Bartlett mentioned that we need the labor anyway. He mentioned Tyson Foods (chickens) and “jobs Americans won’t do”. That was the wrong thing to say to this writer. That statement alone told me everything I needed to know about this refugee program and the U.S. State Department. The State Department has become nothing more than front men for big business.

“Jobs Americans Won’t Do” is a propaganda slogan promoted by the Chamber of Commerce and other big businesses that profit from cheap labor. Tyson apparently has switched from using illegal labor to using “refugees”. Destroying the country and the lives of American citizens isn’t even a consideration. The entire global system is about nothing but global labor arbitrage – exploitation of working people for high profits for the businesses of the few.

Open for Business… The Chamber of Commerce. Note one name on the list: Jan Reeves, Idaho Office for Refugees. The Idaho Office for Refugees made their website look like it was an agency of the Idaho State government, but in fact, they are a business unit of the Jannus Group, the “non-profit” agency that serves as the Public Health system in Idaho and that operates the ratline for “refugees” who are cheap labor for business and soldiers for the Chamber of Commerce program of economic warfare on the American people.