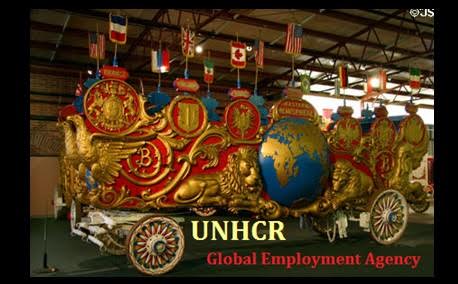 In December of 1994, the U.S. Senate voted to approve the treaty that created the World Trade Organization (WTO). The following is a description of the WTO found on the United Nations Foundation website:

“The World Trade Organization (WTO) is the only global international organization dealing with the rules of trade between nations. At its heart are the WTO agreements, negotiated and signed by the bulk of the world’s trading nations and ratified in their parliaments. The goal is to help producers of goods and services, exporters, and importers conduct their business.”

What the trade in services provision in the WTO treaty did was to turn labor into a commodity – people as tradable objects and it put the multinational corporations in the position to arbitrage labor with the result being a race to the bottom in terms of standards of living. What that means is global corporations can import cheap labor to underbid or undercut labor in another country. When the term labor is used, it includes white collar labor as well as blue collar labor. That’s what prompted Carly Fiorina to say, “There is no job that is America’s God-given right anymore. We have to compete for jobs.” And that includes jobs in our own country. (Side note: In case you were considering supporting Fiorina for President or Vice President, you should know that she was ecstatic at the idea of slave labor competing for survival because Hewlett-Packard was in the forefront of globalization and the commodification of labor. She was cheerleading for corporate America when she made that statement).

This ability to enter a country to provide “services” is not exclusive to global corporations. If an individual who has a skill or profession understands the world trade regime that has been established, they can cross the border of any other country and establish themselves as a business selling services under the international trading system. There is no way to have a country with borders that functions for the benefit of it’s citizens under the World Trade Organization System. Trade in services opens up a country up for invasion and occupation by foreign nationals because everybody is engaged in commerce in some capacity because that’s how we make our livings and support our families.

A Borderless World for Commerce

The merchant’s desire for a borderless world is as old as the appearance of the first migratory traders hawking goods in neighboring communities but it wasn’t until the turn of the twentieth century that traders – industrialists formed collectives to build an international system of harmonized law to create a borderless world for commerce. Traders became traitors in pursuit of the objective of global commerce in which they were free to exploit people and resources across the world without regard for anything except their pursuit of the almighty gold doubloon.

Because their activities, by definition, were subversive to their home countries layers upon layers of lies have been told to the public by politicians, media operations, corporations and their associations and Foundations. “Free trade” as a concept is the most obvious deception at this point but when the Chamber of Commerce, Business Roundtable, corporations and the media began promoting it, they used the image of the flea market model of a buyer and seller engaged in a simple transaction and most of the public bought into it because we are a people who believe in freedom as a general rule.

The treaty to create the World Trade Organization was voted on by the senate in 1994 but the decision to sell-out our country to the international system of global control of commerce was made in July of 1990 at the G7 Summit in Houston Texas. In May of 1990, Senator David Boren, then Chairman of the Select Committee on Intelligence wrote an article for the Washington Post on America’s Role in the World that was inserted into the Congressional Record by Senator Claiborne Pell. A brief synopsis of the article is that because there was no longer a military threat from the Soviet Union and Eastern bloc countries, the U.S. should change our foreign policy to move away from statecraft and diplomacy, and instead, turn our diplomats into pimps for big business for a global economic competition:

“[we need to] change the perspective of American embassies and missions to give greater emphasis to supporting our economic interests. We must recruit more people into the Foreign Service and intelligence agencies with economic skills and training. Right now, two-thirds of our embassies do not even have a commercial officer in the embassy to assist our businesses…”

In effect, the agenda laid out in 1990 and consummated in 1994 partnered the large corporations with the State Department (which includes the CIA) whose mission was always global in nature and pitted them against the domestic interests of our country while their corporate partners pursued business interests globally. This policy was akin to opening the doors to the bank and telling the large corporations and the rest of the world – help yourself because we don’t care about America or Americans anymore. We only care about global corporate profits.

In 2010, the Middle East Policy Council sponsored a panel discussion on Afghanistan strategy. Frank Anderson, former CIA Near East Division Chief (1991-1994) was a panelist. This video clip is of Mr. Anderson responding to a question regarding contractors. It should be noted that the problem of government contractors is even more pervasive in domestic operations than it is for international operations.

That long lead-up was necessary to understand how the system of refugee resettlement is being used as a workaround for the long-term strategy of an international public administrative management system operating under international law for a borderless world of commerce in which there are no nations and no citizens – just businesses and customers . At the local level, refugee resettlement is a racket in which local people are being paid to sell-out their fellow countrymen and their country by promoting the idea that they are engaged in a humanitarian endeavor when humanitarianism is the last thing the global fascists have in mind.

One of our researchers found the 2014-2015 Framework of Cooperation between the United States Department of State’s Bureau of Population, Refugees and Migration and the Office of the United Nations High Commissioner (Commissar) for Refugees.

Excerpt from the Introduction:

The Bureau of Population, Refugees, and Migration at the United States Department of State (hereinafter referred to as PRM) and the Office of the United Nations High Commissioner for Refugees (hereinafter referred to as UNHCR) have been working in formal partnership through a Framework for Cooperation since the year 2000 to provide protection, humanitarian assistance, and durable solutions to UNHCR’s beneficiaries. They have a unique relationship: PRM has long been UNHCR’s top donor, while UNHCR has been PRM’s largest multilateral partner. PRM and UNHCR renew their bilateral Framework for Cooperation biennially to advance shared objectives.

This document focuses on three elements: 1) shared objectives and priorities; 2) continued consolidation of UNHCR’s results-based managerial reforms; and 3) improved accountability and monitoring. It concludes by establishing a schedule of regular bilateral consultations and reporting on progress.

Note: What happened in the year 2000 is that President Bill Clinton signed the Millennium Declaration that was a mandate for global governance (international public administration (management) for a borderless world for international commerce).

In the actual text of the Framework, Section II, Shared Objectives and Priorities,

Recall that a few days ago, it was discovered that the employment agency named Manpower is a partner of the United Nations High Commissioner for Refugees and that a woman who is designated as a refugee looks healthy, happy and well-fed – not at all the image of refugees that is presented to the American people. 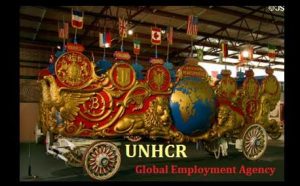 It turns out that the UNHCR doesn’t just consider people in refugee camps as refugees. They also consider refugees to be people who just arrive and stay in a city where they don’t belong as being urban refugees. They may be skilled labor or professionals who need only to claim refugee status. They are too “middle class” to go to a refugee camp where the real refugees are. That makes them economic migrants and not refugees. This is an obvious strategy to use the refugee resettlement system as an end-run around our immigration laws.

In September of 2009, the UNHCR published a policy paper on urban refugees:

UNHCR policy on refugee protection and solutions in urban areas

…it is no surprise to find that a growing number and proportion of the world’s refugees are also to be found in urban areas.1 According to UNHCR’s most recent statistics, almost half of the world’s 10.5 million refugees now reside in cities and towns, compared to one third who live in camps.

So who is an urban refugee? Could be any one or all of these people.