Home Events US versus Them 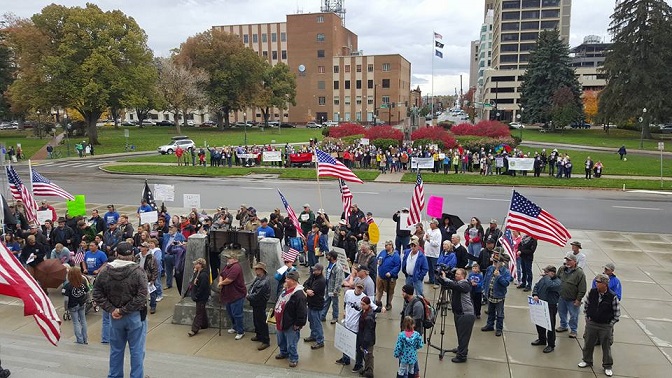 It’s probably not proper English to use us and them but I’m fed up to the gills with correctness – political or otherwise.  Correctness is contra-indicated in an era when red-blooded, American natives are having to fight to preserve our culture and way of life on our own soil.

There were two separate groups at the III% March Against the Refugee Program this past Sunday.  The III%er’s marched from Julia Davis Park to the steps of the Capitol in Boise.  The III%er’s were carrying American flags, pocket constitutions and side arms on their hips.   They represent the heart of America – not the lip service but the real beating heart of America.

There is a park across the street from the Capitol Building in Boise.  Lined up along the curb side was the second group – a group of about thirty international socialists holding signs saying “we love refugees”, “we welcome all refugees”, “we love everybody”.   Ironically, the evil and discord that they bring to locations all over the world is cloaked in religion.  They are pious puppets – social change agents for the New World Order of global totalitarianism.  They are all about peace and love and harmony while they seek to destroy the native culture – wherever it is that they are operating.   Pray devoutly and hammer stoutly.

From the best that I’ve been able to determine, the international socialists originated with the international peace movement that began during the Scottish Enlightenment which coincided with the beginnings of the industrial revolution.  This pseudo-religious movement – infection more accurately –  seems to have been transmitted to the United States through Andrew Carnegie for sure – but perhaps others as well.  Carnegie’s money was used to create a number of tax-exempt Foundations that have been used to grow this cancerous international peace movement that is about anything but peace.  It’s about cultural cannibalization from which business profits and the security and stability of the average person regardless of where they live – is destroyed.

If World War II was the war to end all wars; and if the peace movement that started in the late 1800’s was really about peace, then there wouldn’t be more refugees today than there were at the end of World War II.

The truth is found in the irony of the international peace movement causing destabilization and chaos under the guise of working towards human rights while they destroy native cultures that provide people with peace and security.

It couldn’t have been more clear than it was on Sunday.   It truly is US versus Them.  Americans versus International Socialists.   The refugees are caught in the middle but they are not the issue.  The issue is the system that perpetuates the creation and use of refugees as a cultural weapon.

Make your choice.   You must decide.