Home Resettlement The Parasite Behind The Shield of Tragedy 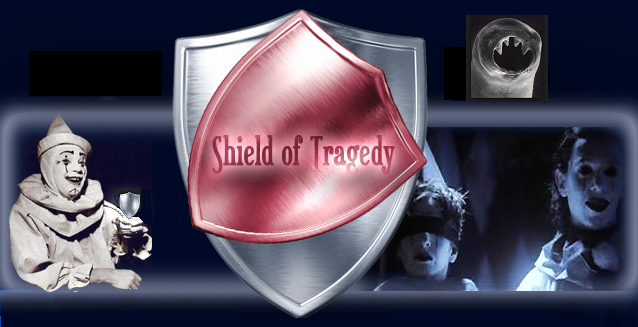 The Parasite Behind The Shield of Tragedy

As many of you know, there is a movement building to shut down the refugee resettlement center at the College of Southern Idaho (CSI) in Twin Falls. Yesterday afternoon, there was a board meeting at the college and citizens on both sides of the issue showed up to make a statement. Karl Kleinkopf, the Chairman of the Board, however, is a busy man and much too important to be bothered listening to statements of the citizens who made the effort to be there. He limited the time for taxpayer/citizen comments to allow for only 11 people to speak. Out of that 11, there were 8 opposing the refugee resettlement center and 3 supporting.

There will be other articles written about that meeting, but I wanted to highlight an item on the Board’s agenda. It had to do with the Head Start program that CSI apparently runs. The report was that they’d spent less than 50% of the money – I believe he said due to under enrollment but for sure he said that they would have to hurry and spend the rest of the money before the end of the year otherwise they would lose it. That’s a very common practice among government and similar organizations like the school so that’s not the issue. The issue is the Head Start program itself. Why does CSI have a Head Start program at the school? It’s supposed to be a junior college but I’m sure they are teaching the students how to be a better baby sitter in the Early Childhood Education classes with “hands on training” at the Head Start classroom. What it also means is that the school is double dipping. The students are paying for the class and the taxpayers are paying for the Head Start program.

Coincidentally, for the last couple of days I’ve been looking closely at all the various programs of prime contractor for the refugee resettlement program in Idaho. The Jannus Group (formerly the Mountain States Group) contracts with the Health & Human Services for resettlement of refugees. The Jannus-Mountain States Group is a privatized social services corporation that began operation in 1974 to assist in the resettlement of the Vietnamese Boat People. They have grown significantly since then expanding into other lines of business including the “Early Head Start” in Northern Idaho which is really nothing more than babysitting at the taxpayer’s expense because the children are infants to age 3 but clearly, they’ve turned the program into a new parent management program as can be seen by the “services” they provide. Catching future clients from the beginning ensures the Jannus Group is a steady stream of income for the future because they feed on social crisis. How great it must be to be able to “build” your own customer base from ever expanding services.

The ‘Kids Count’ program of Jannus is part of a national program funded by the Annie E. Casey Foundation for the purpose of collecting data on children. The Early Head Start program gives them the “cradle” to school part of the records. The programs that Jannus runs for the elderly gives them the retirement to “grave” part of the records. The K-12 school data gives them most of the other data – but there is another piece that gives them work history (besides the IRS data). America’s Job Bank and America’s Talent Bank gives this privatized “governance” system of which Jannus is a part, effective control over the labor market.

Jannus programs for the elderly:

I remembered that CSI manages the program for the senior center meals program so I went to the CSI website to see if that program was listed – and it is.

“The Area Agency on Aging is funded through the Idaho Commission on Aging with funding from the Administration on Aging, Administration for Community Living, the U.S. Department of Health and Human Services, and the State of Idaho.”

I didn’t know that HHS had an Administration for Community Living. At this point, I think I’m getting to the CORE of the Trojan Triangle System that I described in depth in 2010. I gave it that name because it is a complex, coordinated system of programs that are a Trojan horse within a city or county. 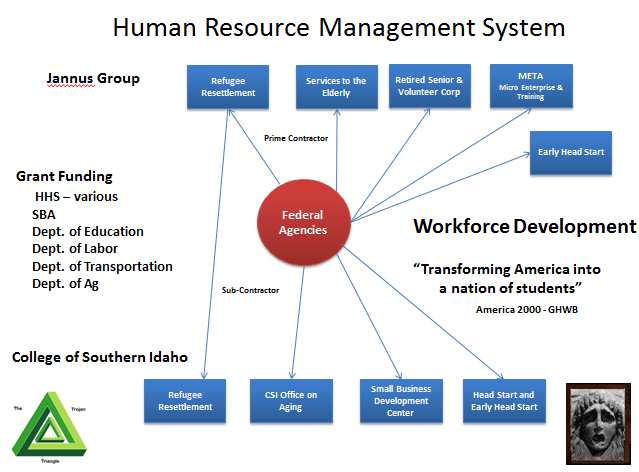 The above image is a drill down from the image below that I did at the time I wrote the Trojan Triangle series. It should be noted that another of Jannus’ programs is the Global Talent program described as:

“Global Talent Idaho is a new workforce development initiative to enable skilled refugees and other immigrants to successfully integrate into professional roles in Idaho – to continue or reclaim their careers- and to help Idaho retain these talented professionals as key contributors to our state’s community and economy.”

Recently, Rick Santorum was the invited speaker at the Christian Science Monitor Breakfast meeting which is a program that C-Span broadcasts periodically. During that program, Santorum said that either 100% or almost 100% of newly created jobs are going to foreign immigrants (including illegals and refugees). If you study the privatized socialist services company, Jannus from the functional, structural point of view, my conclusion would be that they are connected with the United Nations and that the United States is under the management of the United Nations communist system. The Jannus people and our institutions of higher learning are the instruments through which they are working. They are the parasites that feed on human tragedy that they create and they operate behind that shield of tragedy.

The placement of foreign professionals in professional positions (American IT workers replaced by Indian IT workers) plus the importation of “refugees” that aren’t really refugees added to the “small business development centers” that are really funding businesses mostly for foreigners, it presents a picture of an occupation of our country and foreigners are being moved into the positions of control within our government and within our communities. That’s my analysis which you are free to accept or not – at the peril of the future for your children and grandchildren. 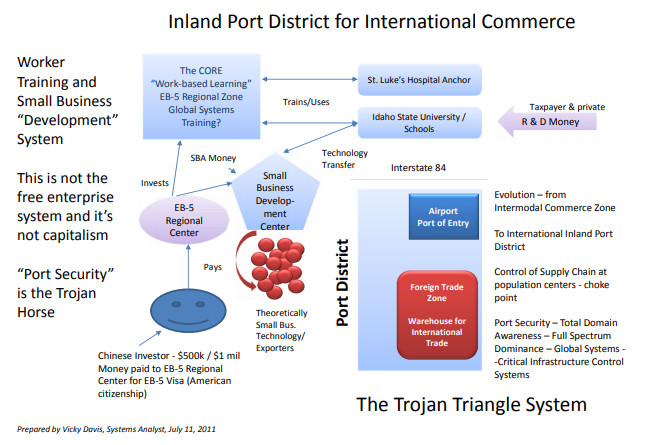 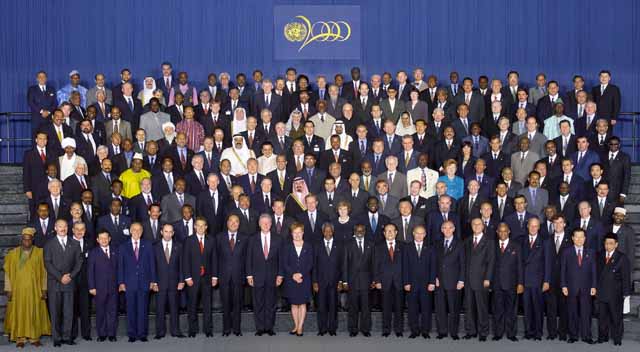 At the signing of the Millennium Declaration