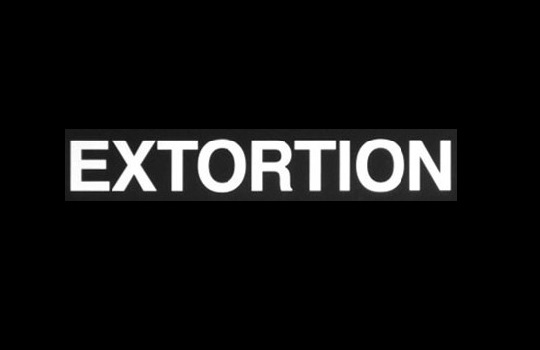 Predictably, following the defeat of Idaho SB1067 in the House Judiciary Committee, the liberal media wrote a mindless hit piece to provide a forum for the Internet trolls to viciously attack the opponents of the bill personally. Figuring prominently as the villain in the article is Rep. Lynn Luker, an attorney from Boise who sounded the alarm on the bill. The hero in the article is Rep. Luke Malek, a former deputy prosecuting attorney who is quoted as saying,

“Representative Luker does not speak for Idaho or me. Scuttling SB1067 without debate was heavy-handed opportunistic theatrics at the expense of single-parents and children, the most vulnerable in our society,” wrote Malek. “I do not support the erratic behavior that will lead to the dismantling of our child support system, nor the implication that this mockery of a legal analysis in any way represents our Republican caucus.”

It’s not the members of the Idaho House Judiciary Committee who voted against SB1067 who are holding the children hostage. It’s the Department of Health & Human Services who are holding the children hostage by extortion. I presume that Rep. Malek, as a former prosecuting attorney understands the crimes of extortion and blackmail. 18 U.S. Code § 872, 873, 875 and it might make the members of Idaho’s legislature guilty of Section 880 for receiving the proceeds of extortion if they pass SB1067 and then receive the 66% funding from the FEDS. It’s something to look into.

The following is the dialog between Senator Benjamin Cardin and HHS Commissioner Vicki Turetsky of the Office of Child Support Enforcement that is documented in the Senate Executive Report EX 111-2 (pages 21-22): 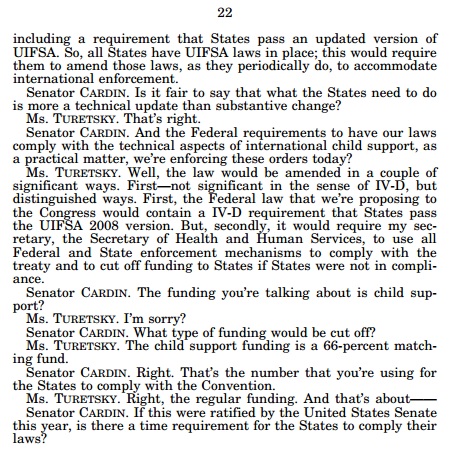 There it is in black and white. If the states don’t become a party to The Hague Convention by passing the Uniform Interstate Family Support Act (UIFSA), HHS will cut off the 66% federal matching funds for child support programs.

Notice in the above dialog, Senator Cardin asks, ‘Is it fair to say that what the states need to do is more a technical update than a substantive change? The answer was, “That’s right”.

Forcing the states to become a party to an international treaty is hardly a technical update except if you look at the entire issue of SB1067 as an IT systems issue without regard for anything else.

Since that thought will seem to be coming from left field for most people, the following is from the written prepared statement Alisha Griffin (New Jersey Department of Human Services) from the Senate Executive Report 111-2 mentioned above – highlights added: 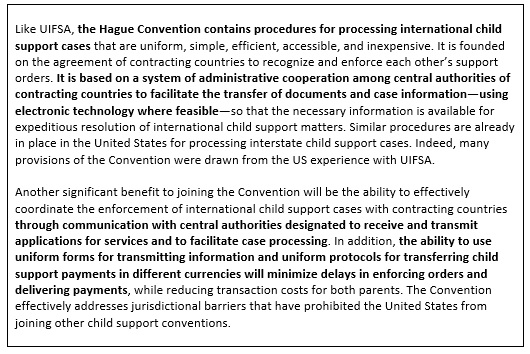 There are other places in the report where similar references are made that indicate that this whole issue is about a computer system – a global system of data exchange for international child support enforcement orders.    And please don’t consider that a minimization of the issue.  Consider it just the opposite with an exclamation point at the end of it.

Even setting aside Article 1, Section 10 of the U.S. Constitution prohibiting the states from entering into any treaties, alliances or confederations, there are serious issues with SB1067 that nobody in this state has had time enough to study so we don’t have any idea what the ramifications of passing this legislation would be.   The attempt to ramrod it through the legislature in the waning hours of the session is evidence enough to conclude that there is more to it than mere “technical changes” to Idaho law.  It needs close scrutiny by many eyes to see what they tried to slip past us.

The House Judiciary Committee members who voted to table this legislation deserve a standing ovation and the best part of all is that they did in fact, do it for the children – to preserve their right to inherit a legitimate government that operates within the bounds of the U.S. Constitution.

The Treaty and Senate Reports can be found HERE.