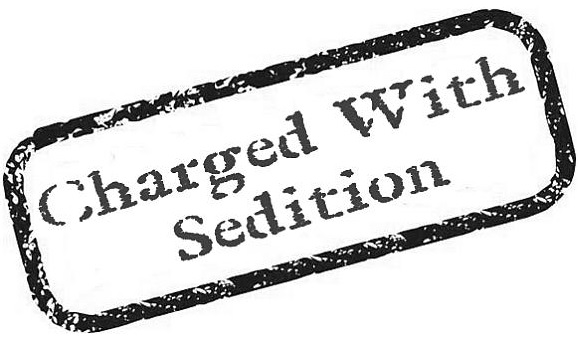 Ways and Means of Sedition

First, congratulations to all the American patriots of Idaho who turned out to stop the passage of Senate Bill S.1067 Health and Welfare, family support act and a heartfelt thank you to the members of the House Judiciary Committee that voted it down in a reported vote tally of 9-8.

The word on the street is that Governor Butch Otter is very unhappy  about the failure to pass this treasonous piece of legislation and he might call a special session of the legislature to try and force the legislature to pass this bill. Why? Because there is federal money attached to it – presumably to pay part of the cost to implement it. It would be a Whimpy Deal… “I’ll gladly take the federal money today and the Idaho taxpayers can take the financial shellacking for it tomorrow.”

Because of the serious nature of the systemic corruption that became visible with this legislation, as Yogi Berra said, “It ain’t over till it’s over” – and it’s not over.

During the mad rush to get out as much information as possible on this legislation and the issues with it, one question that was asked but not answered immediately was ‘can you prove a connection with the UN Convention on the Rights of the Child?’ It can now be answered thanks to a fellow researcher who went looking for it. It’s right at the beginning of the text of the Hague Convention: 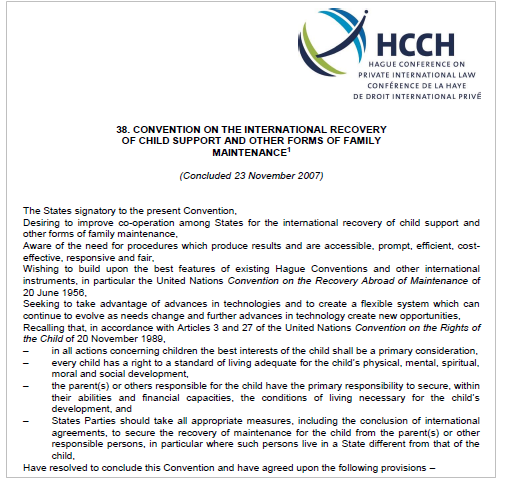 Since the Congress in many cases passes bills by the dark of night, the next thing was to verify the fact that the Senate has not ratified the UN Convention on the Rights of the Child. On the United Nations Human Rights website, a Status of Ratification webpage was found that shows all human rights conventions and the countries that have ratified them. The U.S. has not ratified that Convention (treaty). When I checked THOMAS, the Library of Congress for legislative activities pertaining to the Convention, I found something that reinforces the view that we have a bad case of systemic corruption in our legal system that includes the federal legislative bodies as well.

…SEC. 301. AMENDMENTS TO ENSURE ACCESS TO CHILD SUPPORT SERVICES FOR INTERNATIONAL CHILD SUPPORT CASES. (a) AUTHORITY OF THE SECRETARY OF HHS TO ENSURE COMPLIANCE WITH MULTILATERAL CHILD SUPPORT CONVENTIONS.— (1) IN GENERAL.—Section 452 (42 U.S.C. 652) is amended— (A) by redesignating the second subsection (l) (as added by section 7306 of the Deficit Reduction Act of 2005) as subsection (m); and (B) by adding at the end the following: ‘‘(n) The Secretary shall use the authorities otherwise provided by law to ensure the compliance of the United States with any multilateral child support convention to which the United States is a party.’’.

by adding at the end the following:
‘‘(e) REFERENCES.—In this part:
‘‘(1) FOREIGN RECIPROCATING COUNTRY.—The term ‘foreign reciprocating country’ means a foreign country (or political subdivision thereof) with respect to which the Secretary has made a declaration pursuant to subsection (a).

‘‘(2) FOREIGN TREATY COUNTRY.—The term ‘foreign treaty country’ means a foreign country for which the 2007 Family Maintenance Convention is in force.

(A) in the matter preceding paragraph (1), by striking ‘‘foreign countries that are the subject of a declaration under this section’’ and inserting ‘‘foreign reciprocating countries or foreign treaty countries’’; and

According to the THOMAS record of ALL CONGRESSIONAL ACTIONS, H.R. 4980 was introduced by Michigan Representative Dave Camp (R-MI) on 6/26/2014. It was “referred to the Committee on Ways and Means, and in addition to the Committee on the Budget, for a period to be subsequently determined by the Speaker, in each case for consideration of such provisions as fall within the jurisdiction of the committee concerned”.

This bill was passed under a suspension of the rules with forty minutes of debate. “On motion to suspend the rules and pass the bill Agreed to by voice vote”. It was passed by the Senate without amendment by Unanimous Consent. It became Public Law 113-183.

What the Ways and Means and Budget Committees did here is a strategy of Death by a Thousand Cuts. These two Committees sponsored and got legislation passed behind the cover of one of the most heinous crimes imaginable – sex trafficking. It implements the binding provisions of the (unratified treaty) of the UN Convention on the Rights of the Child through the Hague Convention on the International Recovery of Child Support… which references the UN Convention on the Rights of the Child. All of which means that with a wink and a nod, a small group legislators sold out our country, sold out the states and sold out the American people by subjugating our legal system to an international system and they did it by circumventing the Constitutional prerogative of Advice and Consent of the Senate.

To my way of thinking, this is a seditious conspiracy at a minimum, treason at maximum. Whether one says it out loud or not, subjugating our legal system to an international system is de facto advocating and acting to overthrow of our government. The following is a link to the Cornell Law Library:

Read it and decide for yourself.