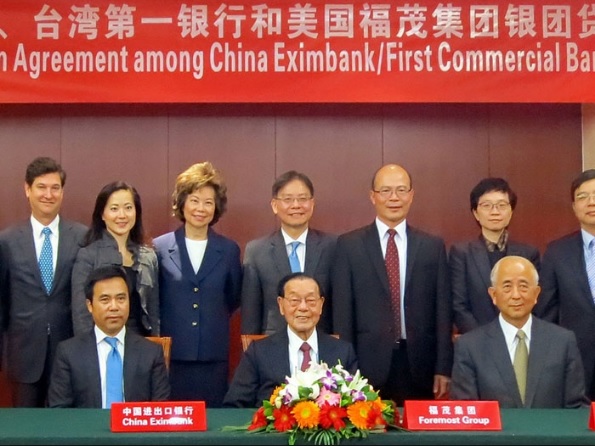 When Donald Trump selected Chairman Chao – Elaine Chao as the Secretary of Transportation, one thing became absolutely clear.  The election fraud that was talked about so much during this election cycle isn’t about voting or counting the votes.  The election fraud is they bother to go through the pretense of an election at all. Elaine Chao represents a continuation of the New World Order policies that were initiated during the Reagan Administration and accelerated under the George H. W. Bush Administration.  The New World Order policies were the dismemberment of the United States as a nation-state with the constituent parts to be subsumed into a regional management system under international law.

Elaine Chao’s parents are Chinese nationals who moved to Taiwan first and then to the U.S. The following is an excerpt from her father’s biography posted on the Foremost Foundation. The emphasis added is obviously because of the redefinition of history. The “civil war” was the Communist Chinese Revolution.

Born in Shanghai, James S.C. Chao has dedicated his life to shipping, trading and finance beginning with his study of navigation in China. As a young cadet, he completed his college coursework in 1949 before the Civil War in China resulted in his relocation to Taiwan…  In 1958, he took the national Master Mariner Examination and broke all previous records in the Republic of China by achieving the highest score ever recorded. This honor singled him out for further government sponsored studies in the United States. In 1964, Dr. Chao founded Foremost Maritime Corporation, developed it to the current Foremost Group… today, Foremost Group, headquartered in New York City.

That’s pretty magic don’t you think?   He moves over here and starts a shipping company?   Right.

After Elaine Chao graduated from Harvard University, she went to work for Citicorp in New York City.

Walter Wriston, Chairman of Citibank was on Ronald Reagan’s Council of Economic Advisers and globalization of the bank’s business was a priority (See pg 455 – comments by Harry Freeman). Wriston was an extreme libertarian and Reagan was a dutiful servant.   In 1983, Reagan signed the La Paz Treaty with Mexico which created an international zone on the border – 60 miles on either side.  This zone was the first step towards the disintegration of the United States as an independent and sovereign nation-state and was in keeping with the Brandt Commission’s North-South policy for regionalization. 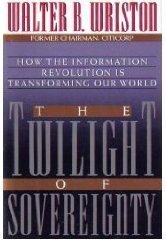 “The late Citicorp CEO, Walter Wriston’s Twilight of Sovereignty was a radical libertarian manifesto that delighted in the rise of transnational action beyond the reach of democratic self-government. The late Robert Bartley, long time editor of the Wall Street Journal, is reputed to have told journalist Peter Brimelow, “the nation-state is finished.” And even at meetings of the venerable Mt. Pelerin Society strong arguments were made at one meeting supporting a “world constitution” from a libertarian perspective.”  The Enablers of Transnational Progressivism by John Fonte

I just noticed something I missed before – Walter Wriston’s alma mater was Tufts University with the significance of that being the 1990 Talloires Declaration that originated with Tufts.  Another dot connected.   It was documented here…  The Movement.

After Chao’s White House Fellowship, she moved to San Francisco and went to work for the Bank of America but came back to Washington DC to become the Deputy Administrator of the Maritime Administration.  She was appointed by Elizabeth Dole who was Secretary of Transportation at that time.

This agency promoted the U.S. merchant fleet and supported America’s water-borne transportation system, including ports, shipbuilding, and repair facilities. Elaine was the first woman and the first Asian Pacific American to achieve this high a position in the Department’s history.  By 1988, Elaine Chao had proven so effective at the Maritime Administration that President Ronald Reagan appointed her to become Chairman of the Federal Maritime Commission, an independent regulatory agency that oversees international ocean-borne commerce and reports directly to Congress.  By 1989, Elaine Chao’s abilities and diligence brought her increasing recognition as a rising young star and a position with even greater responsibility in the administration of President George H. W. Bush as Deputy Secretary of the Department of Transportation…

The significance of this background becomes obvious with the announcement of the new National Transportation Policy of the Bush Administration in 1990.  The video below is a composition of two C-Span programs – one, the announcement of the new Transportation Plan and the other has clips from the press briefing that followed.   The sound is very bad on these two videos.  Apologies for that, but that’s the way the programs are in the C-Span Archives.

To recap where we are in the country’s history at this point: the Helsinki Final Act was signed in 1975 by Gerald Ford, Reagan accepted the Soviet challenge of the battle of ideas and systems, Reagan signed the La Paz treaty breaching our southern border (1983), 1985 Reagan signed an agreement with the Soviets for exchanges of professors at universities and journalists in co-operation with the provisions of the Helsinki Final act, China expressed interest in participating in world trade(1986), the Uruguay Round of trade was kicked off (1987) which would lead to the establishment of the WTO in 1995, (1989) Malta Conference, the Cold War was declared over, (1990) a “New World Order” coming into view, 1990 Houston Summit of the G7-G8,  Bush – Enterprise of the America’s Initiative (1990), Bush – initiates studies for health care reform (1990 nationalized medical records), Bush new National Transportation Policy (1990).

The following is an excerpt from the history of the NAFTA Superhighway research that I did between 2006 and 2009 – and on-and-off since.  It’s on my old website but I’m updating it and putting it this website.  Understanding it is key to understanding what is happening to our country and more importantly, who is doing it.

Lyle Saxton of the Federal Highway Administration (FHWA) was instrumental in officially recognizing a private sector group that became the public-private steering committee for Intelligent Vehicle Highway Systems.  The name of the group was originally, the Intelligent Vehicle Highway Society of America.  IVHS America.  It was comprised of the leadership of the Highway Users Federation and the American Association of State Highway and Transportation Officials.

The Intermodal Surface Transportation Efficiency Act (ISTEA) of 1991 legislation provided funding and authorization for the organization – IVHS of America to be a Federal Advisory Committee within the U.S. Department of Transportation.  In other words, lobbyists for the transportation system were embedded in and partnered with government.  Elaine Chao would have been the representative for the shipping industry and as Deputy Secretary of the Transportation Department, she was in position lead the way with her connections to Asian shipping through her father James Chao.

This is getting too long so I’m going to have to continue it in one more article.  Understanding the transportation system plan that GHWB initiated in 1990 and the position that Chairman Chao holds in it is central to understanding what is happening to this country.

Here are some of the areas of government that have been infected:

The Intelligent Vehicle Highway System was designed by the two groups above – and they were embedded within our government – including interagency.

Their European Counterpart is named ERTICO. The German car companies actually began the European High Tech highway system and the name of their first project was Prometheus.

And there is a Japanese group – doing the same thing.

There might be more that I’m not thinking of at the moment, but that’s enough for you to grasp the significance of the interagency group and hopefully the nature of the asymmetric war that is being waged on us.

This brings together my research on the NAFTA Superhighway, Foreign Trade Zones, Inland Ports, Workforce Development Zones (Trojan Triangles), the redesign of our health care system and Fusion Centers and probably more that I’m not thinking of at the moment.  In other words, I’m zeroing in.

That interagency group – consolidated into the Department of Homescam Security runs our government. IMO – they are the 21st century ______   (you fill in the blank).

Step back now to George H.W. Bush’s “war” in the gulf.   Saddam Hussein was enticed to invade Kuwait allegedly because Kuwait was slant drilling – stealing Iraqi oil but more likely, Saddam’s implementation of the North-South initiative.

On this webpage is a very simple history because all that is needed is the timeline:

“In the last months of 1990, the United States participated in the defense of Saudi Arabia in a deployment known as Operation Desert Shield. Over 500,000 American troops were placed in Saudi Arabia in case of an Iraqi attack on the Saudis. The U.S. further sought multilateral support in the United Nations Security Council.”

Bush… issued an ultimatum to Saddam Hussein: leave Kuwait by January 15,1991 or face a full attack by the multinational force.

On January 18, 1991 U.S. Transportation Secretary Skinner held a press conference on increased security for all modes of U.S. transportation due to the potential for terrorism – but without any credible threat of terrorism.  Thus began the war of terror for transportation technology funding which is leading to Police State America.

The following video has excerpts from that press conference, but I highly recommend that you watch the entire program on C-Span.

On December 18, 1991, H.R. 2950, the Intermodal Surface Transportation Efficiency Act of 1991 was signed by George H.W. Bush.  This legislation was sponsored by Norm Mineta.

On December 12, 1991, S.272, the High Performance Computing and Communications Act of 1991 was signed by George H.W. Bush.  This legislation was sponsored by Al Gore.

These were the two essential elements required for Total Domain Awareness and Control.

In January of 1992, the Office of Technology Assessment published a report titled, Technology Against Terrorism, Structuring Security.