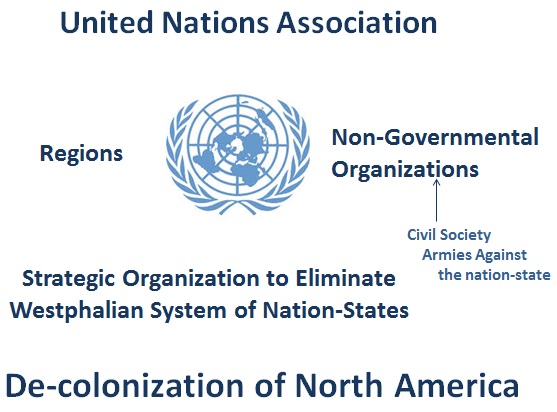 Treason on the Installment Plan

If there has been a single family that has had more influence and done more damage to this country than the Rockefellers, I don’t know who it would be.  In a U.S. State Department history of the founding of the United Nations is written:

“The delegations negotiated a role for regional organizations under the United Nations umbrella and outlined the powers of the office of the Secretary General, including the authority to refer conflicts to the Security Council.”

According to Nelson Rockefeller’s Senate biography, he was responsible for the inclusion of United Nations recognition of regional pacts inherent in which is the regional organization assigned to oversee the regional pact.

“He played a key role in hemispheric policy at the United Nations Conference held in San Francisco, developing consensus for regional pacts (such as the Rio Pact and NATO) within the UN’s framework.”

In 1983 the Senate ratified a treaty with Mexico known as the La Paz Treaty (TIAS 10827) that created a geographically defined border region under the management of the Environmental Protection Agency under the authority of the State Department because the State Department oversees and enforces international agreements.  This treaty put that territory for the entire length of the border with Mexico under international law.  In 1986, the U.S. added an annex to the La Paz Treaty concerning the transboundary movement of hazardous waste.  They also negotiated and got a treaty with Canada on the same subject (TIAS 11099).  The North American Free Trade Agreement (NAFTA) included the 1983 La Paz Treaty and the 1986 Treaty with Canada as Annexes which means they were incorporated into the agreement in their entirety.

What this did was to put the entire North American continent under international law under the management of the State Department as the agency to oversee international agreements.   The NAFTA agreement had to do with the economy and the two other treaties had to do with the environment.  Since everything we do is within the definition of the environment, sovereignty over our lives was effectively transferred.   (More info on this can be found here:  Puppet Regime).

In 1994, the first of a series of summits was held to finalize the treason that has been in progress since 1945 with the creation of the United Nations.   The objective of the summits was to create the Free Trade Area of the Americas which is really a euphemism for ‘common market’ which – following the pattern of the European Union would end with creation of the North American Union – a region under international law.  What that means is the end of sovereignty of the United States as a nation-state with governing authority transferred to an unelected regional commission unseen and unknown to the American people.

The FTAA summits were:

1998 – Santiago, Chili Summit of the Americas

Succinctly, what they’ve done has been treason on the installment plan – putting the United States into a regional “governance” system under the United Nations system.

Regionalization under the United Nations System

Declaration on the Granting of Independence to Colonial Countries and Peoples

A paper written by International Law Professor Edward McWhinney published on the United Nations Audiovisual Library of International Law provided background and analysis of this Declaration.  The Declaration was put before the General Assembly rather than the Security Council so that the veto power of the permanent members was not applicable.   In effect, this was a coup d’etat on the permanent members by the majority of member countries occurring as Professor McWhinney wrote, on “cultural and ideological terms”.   Since the United Nations operates as an association under international law, the Declaration provided the opportunity to use the international courts and their armies of non-governmental, civil society organizations to begin breaking down the Westphalian nation-state system.  In 1960, the Declaration was like a hairline crack in a sidewalk.  Over time, the entire sidewalk will crumble away to dust and debris and that is exactly what is happening to the United States.

Regionalism and privatization of government functions were marketed to the American people as being good economic policy and efficiency of government operations.   Regionalism was promoted through what was falsely presented as trade agreements when all evidence indicates the real objective was to transfer economic sovereignty to unelected commissions under international law.  The privatization of government functions using federal tax money to disempower the states and elected government officials has been used to transfer governing power to unelected groups of people creating a fourth column of operatives ready to aid and abet a fifth column occupation of the country in the final phase of de-colonization.   Towards that goal, the U.S. State Department, acting as an agent of a foreign power in conspiracy with the networks of the fourth column is engaged in massive importation of tribal peoples hostile to western civilization and the Westphalian nation-state system who are the fifth column deceptively being described as “refugees”.

It’s not a stretch to think that the logic of disarmament with legislation passed that close to the 1960 United Nations Declaration on De-Colonization was taken as a step towards the dismantling of the lawfully constituted American government.   The military is the protection for the nation-state and the people of the nation.  Disarmament removes that protection.   The last line of defense is the 2nd Amendment right to keep and bear arms and that right of the people under our lawfully constituted government has been under attack for decades.

We, the majority of the American population have been at a disadvantage because we don’t have a common understanding of history.   It’s time to remedy that and it’s absolutely imperative that we do.