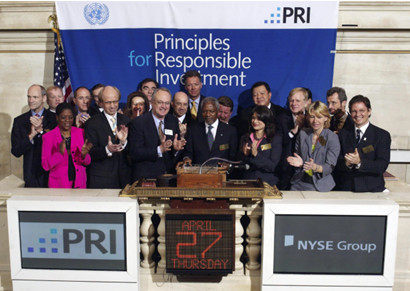 Recently, I was reading a paper on reflexive law.  Reflexive law is not really law.  It is a concept presented with ivy league business school panache that when broken down to the basics seems more like a mechanism of extortion, bribery and racketeering.   The paper is Green Business and the Importance of Reflexive Law: What Michael Porter Didn’t Say by Dennis D. Hirsch and Geraldine W. Powell, Professor of Law, Capital University Law School.   The following are the significant excerpts:

. . . early on, Professor Michael Porter of the Harvard Business School set out a broad and compelling theory that seemed to address the issue.

Yet Porter’s thesis has a problem. Outcome-based regulations will not work to motivate many green business activities.

Reflexive law is that missing piece. As coined by the German social theorist Gunther Teubner, reflexive law is law that fosters self-regulation.33 It consists of laws and policies that push private firms to: (1) internalize social goals (e.g. environmental performance goals) and adopt them as their own,34 and (2) creatively self-manage their operations so as better to achieve these goals.35 Reflexive law requires neither the specific technologies of traditional regulation,36 nor the specific environmental results of outcome-based rules.37 Instead, it uses tools such as information disclosure, stakeholder involvement, or planning requirements to motivate companies to undertake their own, self-directed improvement efforts, while leaving it up to the firms to determine both the means and the ultimate environmental outcomes.38

Years ago, I researched an affordable housing development in Star, Idaho about 20 miles outside of Boise.  The development did not make economic sense.  Curiously, the developer was owned by a holding company of the Arizona Public Service (APS) – a utility company.  And what was a utility company doing developing homes through a holding company when the 1935 PUCHA law prevented utility companies from owning holding companies for unrelated businesses?    The following are excerpts from previous research as I tried to solve the puzzle of what was happening to the small farm town of Star.

The Falling Star . . . Avimor, a development company out of Arizona was building a planned community of about 600 homes just outside of Star. There were several problems with that. First, there was no market for them. Of the homes that had been built, most were sitting empty and a few were rented. Star did not have the infrastructure for the development – and especially did not have the roads to support it if they did manage to sell the houses. They are miles away from the Interstate and at least a mile or so from the old highway. At the time, Boise’s economy was not doing well. The few large corporations in Boise were moving jobs out, cutting back and scaling down which in turn put the rest of the economy in decline correspondingly.

The parent company of Avimor was SunCor, an Arizona corporation. SunCor Development Company was a wholly owned subsidiary of Arizona Public Service (APS), Arizona’s largest electricity supplier. SunCor had thousands of acres of land under development in Arizona, Utah, Idaho and New Mexico. They also had developments in California and Mexico.

New York, 24 January 2006: Innovest Strategic Value Advisors, Inc. (ISVA) released its new electric power industry report covering the largest publicly traded electric power companies in the U.S. The Innovest analysis indicates that companies that take positive and proactive measures to address environmental, social, and governance factors (ESG) can capture significant benefits for shareholders. In line with this, Innovest found that the half of this group of electric power companies with better ESG ratings outperformed, on average, their below-average industry peers by 1700 basis points (or 17 percentage points) in total shareholder return (stock price appreciation plus dividends) over the over the past 3 years from November 2003 to November 2005. Additionally, Innovest’ results show that electric power companies with better environmental performance consistently outperformed laggards financially during the last seven years.

. . . Innovest Strategic Value Advisors is an internationally recognized investment research and advisory firm specializing in the analysis of non-traditional sources of investment risk and out-performance. Innovest’s major strategic investor is ABP, the largest pension fund in Europe, who owns a minority position. Its chairman, Jim Martin, was chief investment officer for TIAA-CREF, one of the largest pension funds in the world, for over fifteen years. The firm’s founder and Chief Executive, Dr. Matthew Kiernan, is a former partner with KPMG and director of the World Council for Sustainable Development in Geneva. In addition to ABP, the firm’s other clients include SSgA, T. Rowe Price, Neuberger Berman, Rockefeller & Co., Cazenove Capital, BP Investments, Henderson Global Investors, HSBC Asset Management, UBS and the England & Wales Environment Agency. The firm currently has over £1.1 billion million under direct sub-advisory mandates, and has clients in 20 countries.

As I put the puzzle together according to my understanding, U.S. corporations have sustainable development goals (SDGs) to meet and they self-report their progress on those social goals.  It would appear that the European and U.S. teacher’s union pension funds were used as weapons of economic warfare against U.S. firms to participate “voluntarily” in the “go green” movement to meet those SDG social goals as calculated through the social ESG rating system.  If the ESG ratings have equal or greater weighting than the financial status of the firms, the firms are virtually forced into social spending (to keep up the ESG ratings) in order not to have the price of their stocks and bonds driven down and/or it might determine the interest rate by which they can borrow.

The question is:  were/are these pension funds also used against our cities, towns and states to force these public entities into what turns out to be communism?  Is this the reason why city leaders are allowing parts of their cities to be burned down?  Was Enron waging war against PG&E and the Portland utility to earn high ESG ratings and to have their stock soaring when they had no assets to speak of?

Continuing with the previous research titled White Collar War – a 2007 Innovest report was found.  The following are excerpts from the “Innovest Strategic Value Advisors & the United Nations Principles for Responsible Investment”.

By providing institutional investors with enhanced research on environmental, social and corporate governance (ESG) issues, Innovest is helping PRI signatories fulfill their commitments to the Principles in a variety of ways. Whether signatories are interested in company ratings and quantitative ESG data, or engagement and advisory services, Innovest’s Products and Services are flexibly packaged and designed to meet investors’ needs.

Specifically, Innovest’s ‘i-Ratings’ is our client web portal where the following Innovest products and services can be accessed:

Innovest’s Intangible Value Assessment (IVA) ratings are focused on the nontraditional factors which contribute most heavily to financial out-performance. Specifically, our ratings evaluate more 2,000 companies on 120 different performance metrics that fall under the following four pillars:

The launch of the United Nations Principles for Responsible Investing was in April of 2006.

The heads of leading institutions from 16 countries, representing more than $2 trillion in assets owned, officially signed the Principles at a special launch event at the New York Stock Exchange. The Principles were developed during a nearly year-long process convened by the UN Secretary-General and coordinated by the UN Environment Programme Finance Initiative (UNEP FI) and the UN Global Compact. 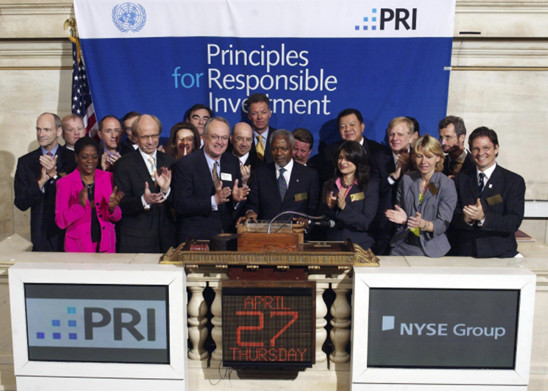 Crafted by more than 20 pension funds, foundations and special government funds, backed by a group of 70 experts from around the globe…

The Principles can be view HERE.

Is this why the National Education Association (teacher’s union) supports the LGBTQ agenda?   Is that why Critical Race Theory is being taught in the schools?   Have educators succumbed to extortion?   Have they sold out American children for their pensions?    I think the answer to that would be a resounding YES.

In 2011, this article was found on the India Times website.   The article shows that the U.S. is a puppet to market pressures so there is no doubt that our cities, counties and states are also puppets.  It explains a lot I think.

The following is a video clip from a recent hearing on Climate Change.  I captured the clip because of the mention of Margaret Thatcher but also because what Sean Casten said sounded like a threat to me.  I didn’t know what the threat might be – but there is a question in my mind – does it have to do with international pension fund managers and the ESG?

The following video is a clip of Professor Michael Porter speaking at President-Elect Bill Clinton’s conference on economic policy.  Notice that Porter talks about U.S. corporate ownership (lack there of actually).