Home Corruption Patterns and Clues: Workers of the World Unite

Patterns and Clues: Workers of the World Unite

The last time I saw a sign like that was in Boise at a III% rally opposing refugee resettlement.

At the Boise rally, there was one man with the protesters who was wearing a New York City Fire Department cap.  In Boise, Idaho, that’s a JDLR – just doesn’t look right. When I went to the Port Authority of NY/NJ, the New York Fire Department is listed there.  Is the FDNY an organization of the Port Authority?   I don’t have the answer to that question but it is an intriguing one.  (Look at categories on the right hand side). 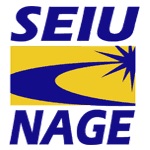 Scroll back up and take another look at Alex Neiwirth, Field Representative of NAGE,  the National Association of Government Employees –  also known as SEIU Local 5000. Their logo is a backward crescent moon – the same symbol used by ISLAM.

If you go to the NAGE website to see who they are, they aren’t just one profession, the professions included in Local 5000 are cross-cutting.

We are public and private  workers—federal, state, county, and municipal employees— police officers, firefighters, correctional officers, health care workers—nurses, paramedics, and emergency medical technicians—office workers, and professional workers. We seek a stronger union to build power for ourselves and to protect the people we serve.

Women and men of every race, ethnicity, national origin, religion, age, physical ability and sexual orientation, we are the standard-bearers in the struggle for social and economic justice begun nearly half a century ago by shipyard workers who dared to dream beyond their daily hardships and to organize for economic security, dignity and respect. 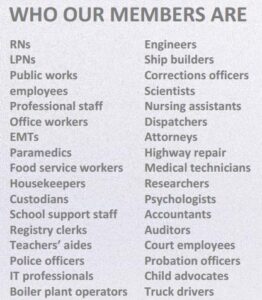 My guess would be that these people are Port Authority workers belonging to a special local that cuts across professions.  The big clue is ‘ship builders’ in the same local as EMTs, RNs, and IT people who traditionally shunned unions.

Damn… this all makes sense.. port workers – “workers of the world unite”. 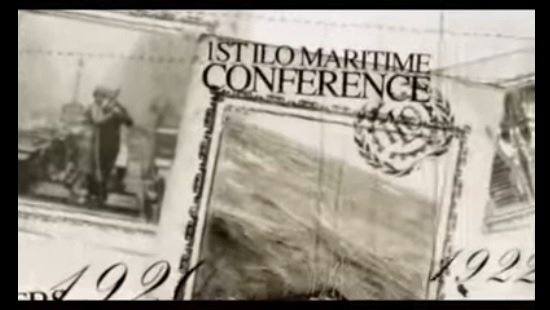 The color revolutions?  They started in Poland – at the shipyard, 1980 – Lech Walesa.   Initially the colors were red and yellow – then green and then choice of the “revolutionaries”.

The International Labor Organization (ILO) first organized under the articles of the League of Nations.  The ILO was then the first organization to reconstitute itself under the United Nations after the UN was created in the Port Authority jurisdiction of New York.

Members of the Socialist International have been making themselves quite visible in the last few years.  Notably, the United Nations High Commissioner for Refugees (UNHCR) was an officer of the Socialist International for 13 years before becoming UNHCR.  Recently it was announced that he is the new Secretary General of the United Nations, replacing Ban Ki Moon.

This all makes sense once you get kaleidoscope lined up correctly.

This needs more research so I’m ending here.  This gives a good starting point though.