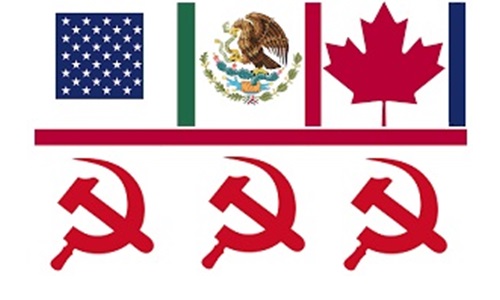 Soviet Union of the Americas

In the jubilation with the Nevada case against the Bundys being dismissed with prejudice by Nevada District Court Judge Gloria Navarro, people seem to have forgotten about Judge Navarro’s prejudiced rulings against the defense prior to whistle-blower, Larry Wooten’s revelations about the criminality and misconduct by the BLM. She was aiding and abetting Prosecutor Steven Myhre in preventing the defense team from defending their clients. The ONLY reason that Navarro dismissed the case against the Bundys was because her back was against the wall and her career was on the line. BLM Agent Larry Wooten is the real hero in this case because he brought the truth to the public.

Do you remember that Judge Navarro ordered a THIRD trial for Eric Parker and Scott Drexler when the second trial ended in a mistrial?   Double jeopardy is unconstitutional.  Triple Jeopardy is corrupt and lawless.

In November of last year, Attorney General Jeff Sessions gave a speech at the Federalist Society.  He talked about how proud he was of the Justice Department and he repeated the mantra about the importance of “the rule of law”.  Recently, Deputy Attorney General Rod Rosenstein gave a speech to the Forum Club  of the Palm Beaches of Florida repeating the same mantra.  Apparently, holding a law degree combined with a government paycheck confers priest status.  They become ABOVE the law and ABOVE question.  No more – and never again.  The U.S. Justice system has become a third world cesspool of corruption right along with our economy, we are racing to the bottom.

Prior to the Bundys coming along and prior to the arrest of my friend, Michael Emry, proprietor of TVOI News as a consequence, I never gave much thought to the Justice System.  Like most people, I assumed the system was operated with integrity and if not, then by the rules established first by the Constitution and next by precedent established requiring fairness but like everything else in this country, the law and system of justice has been flipped to become a weapon against the American people.  What I’ve learned through the entire ordeal is that the system is designed for corruption and while there may be a few good people working within it, good people working inside a corrupt system can’t correct it from within.  It can only be corrected from the outside and therein is the dilemma.   There is no oversight on the independent judiciary.

The judicial power of the United States, shall be vested in one Supreme Court, and in such inferior courts as the Congress may from time to time ordain and establish.

In other words, the federal courts work for the Congress – not the Supreme Court.

After defining the cases of original jurisdiction for the Supreme Court, Section of Article III says the following:

In all the other cases before mentioned, the Supreme Court shall have appellate jurisdiction, both as to law and fact, with such exceptions, and under such regulations as the Congress shall make.

Congress created the federal courts with the Judiciary Act of 1789.

Initially, 13 jurisdictional districts were created with one federal court and one judge for each district.  District courts were given authority to administer justice for crimes and offences committed within their respective districts or upon the high seas.  They were also given exclusive  original jurisdiction in all civil causes of admiralty and maritime jurisdiction including all seizures under laws of impost, navigation or trade of the US where the seizures are made on waters which are navigable from the sea…; they shall have cognizance concurrent with the state courts in all causes where an alien sues for a tort only in violation of the law of nations or a treaty of the United States;

District courts were authorized to appoint clerks for the court and each clerk was required to take an oath or affirmation that they would faithfully enter and record all of the orders, decrees, judgments and proceedings of the said court.

Each district was authorized to have a Marshal to execute all lawful precepts of the court.  The Marshal was given the power to appoint deputies.

Each district was to an attorney or person learned in the law to act as an attorney for the United States within the district.

The Judiciary Act also created the position of the U.S. Attorney General to prosecute and conduct all suits in the Supreme Court and to give his advice and opinion to the President.

The following two groups have control of the country.  They are unelected, unaccountable and corrupt.

The law as a remedy for government abuse of the citizenry has been removed from the reach of the American people.  Federal District judges are appointed for life.  They are rulers over kingdoms of corruption.  The Department of Justice is an Administrative Agency comprised of people who are not elected and not accountable to anybody.   The Prosecutors within the judicial kingdoms are subjects of the judicial high priest – the District Judge.  Advancement in their careers is dependent upon the opinion of the judicial high priest.   As corruption of the courts goes, so goes the corruption of the prosecutors.

If you were paying attention, you would have noted the fact that I highlighted in red, the position of the Chief Judge of the Court of International Trade on the Judicial Conference.   The reason I did that is because the U.S. Senate has committed treason against the people of the United States by voting to incrementally diminish the sovereignty of the United States as a nation-state through what they call trade agreements but that are in reality treason agreements.

What exactly did you think the Free Trade Area of the Americas Was?   It’s a borderless, UNION (merged) of territories of the North American continent and it is managed by a Committee – a SOVIET.   Putting the concepts as they have been enacted by the International Trade Agreements, the Free Trade Area of the Americas is the Soviet Union of the Americas.  The unelected, unaccountable governing system is enforcing the agreements that the traitors in the U.S. Senate negotiated through the U.S. Trade Representative with Trade Promotion Authority.  In 2013, there was a panel discussion with two executives and Michael Froman, the US Trade Representative under Obama where you can hear all about these so-called trade agreements.  When you are listening – keep in mind that a service is a job – so every time they mention services, the direction goes both ways…  foreign workers in to perform services, Americans out (of the country or out on the street).  Through these agreements, the United States is becoming communist (institutionalized corruption with the country’s assets, legal and governing structures operating for the benefit of a few).   Because the treason was done through international trade agreements, the federal courts and the administrative agencies are the enforcers of the agreements and there is no remedy and no oversight of the process.

George Herbert Walker Bush’s New World Order was to transform – incrementally, the United States into a communist country, corrupt to the core with no regard for the citizens of the country.  They count only as “workers” in a system designed for the privilege and wealth of a few.

In effect, on February 5, 1991, President George H.W. Bush made the announcement that he was dissolving the United States :