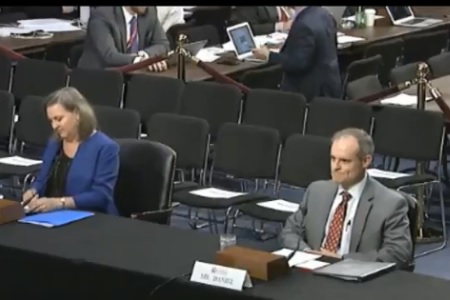 On June 20, 2018, the Senate Select Committee on Intelligence held a hearing on Russian Election Interference (note: the hearing was late so it begins about 33 minutes into the video).  The two witnesses were former Obama Administration officials, Victoria Nuland, Assistant Secretary of State for European and Eurasian Affairs and J. Michael Daniel, White House Special Assistant, Office of the President.  The purpose of their testimony as the title of the hearing implies was to testify about the alleged Russian interference in our elections (there was none) and to hear their recommendations to remedy the interference that didn’t happen.

As you may recall, Victoria Nuland became famous when she used a four letter word in a secretly taped conversation with a fellow State Department operative when they were plotting against the people of the Ukraine by interfering in their election process.  Nuland was employed by the State Department but she was working for the United Nations in that effort to promote the candidate that they wanted to run the government of the Ukraine.

At the time, there were questions about Nuland’s activities as it pertained to manipulation of the Ukrainian elections but it was RT – Russia Today that pushed the story out into the alternative media.  That was in 2014.

At the time when the alleged Russian hacking of our elections was making the headlines, it didn’t take much research to determine that the hacking story was a gambit for a federal takeover of our state elections processes.  Of course that was unconstitutional and for once, the Secretaries of State in our states fought back and refused to play the game.

The testimony of Victoria Nuland and Michael Daniel in the Senate Intelligence committee hearing serves as the epilog to the Russian hacking dialectic.   Listen carefully to Nuland’s testimony.

A transcript of Nuland’s testimony was found on the Senate Intelligence Committee website.  The points she made are critical to identifying the true nature of the insider threat and naming them.

Following the points on her want list, she said:

The Center for a New American Security, which I lead, plans to join the community of think tanks working on these issues. We will put special emphasis on pulling together the best minds in industry, academia and government to craft full-spectrum deterrence strategies against malign state actors in the cyber realm. This work cannot replace the responsibility of federal and state government but we hope it will help inform wise choices going forward.

It must be said that only the “best minds of industry, academia and government” got us into this disaster for our country.  Perhaps it’s time to put some “lesser minds” on the job and by lesser, I mean the minds of people who live in the real world and not people who are off in the fantasy of future world where strategic planning means concepts in bullet points and truth doesn’t matter.

What this traitorous Nuland wench is advocating is a Five Eyes international government by soviet (committee) that will sit over the top of our existing government de facto by the definition of the functions and the nature of the systems and processes she wants to control.

She mentioned that some select members of congress and their key staff could sit on the committee.  That’s big of her to “allow” a few of our elected officials to participate on this communist board of control.

Nuland said that she was heading up a new think tank.  On the website of the Center for New American Security (CNAS) there is a video on the “China Challenge” which is an interesting bait and switch.  Russia is allegedly the enemy but China is only an economic competitor that can be dealt with using policy that their soviet (committee) can help craft.  Notice the correspondence between the points Nuland listed to deal with Russia are the same points listed as things they think needs to be done to compete with China and everything that Ely Ratner attributes to China in terms of a power play is exactly what Nuland is advocating for changes in the U.S.

Ratner talked about government policy being divided between economic and military with the policies being at odds with each other.  Case in point was a June 21, 2018 hearing of the House Armed Services Committee to hear testimony on the China threat. The title of the hearing Military Technology Transfer: Threats, Impacts and Solutions for the Department of Defense.  There were four witnesses for this hearing:

The Honorable Kari A. Bingen
Deputy Undersecretary of Defense for Intelligence, Department of Defense

The Honorable Michael D. Griffin
Undersecretary of Defense for Research and Engineering, Department of Defense

The following are a few excerpts from that hearing:

The one truth to come out of all of this is that our congress and our government are working at cross purposes – and none of those purposes serve the interests of the American people.  The irony is that the insider threat comes from the very same people who pretend to want to protect our interests from the outsider threat.