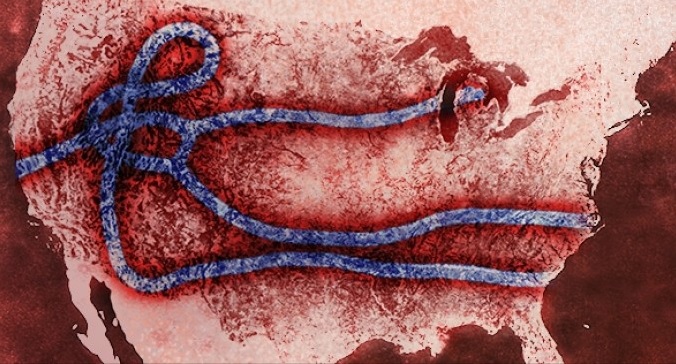 In the first part of this series, it was found that the Public Health System in Idaho is divided into seven districts.  The Districts are independent agencies “corporate and politic”.  They are not accountable to the People of Idaho.

The Mountain States Group recently renamed the Jannus Group is the contractor that manages the District Health Offices.  They also are the prime contractor for the Health & Human Services Refugee resettlement program.    They operate under a set of Administrative Rules that they write for themselves.   The legislature votes on the Rules, but that’s a mirage of control.  The system of public health itself makes them a public health menace.

The following is the line authority for the South Central Public Health District.  Rene Le Blanc runs District V – and she reports to a Board of County Commissioners.   The Board is comprised of a representative member from each of the following eight counties: Blaine, Camas, Cassia, Gooding, Jerome, Lincoln, Minidoka, Twin Falls. 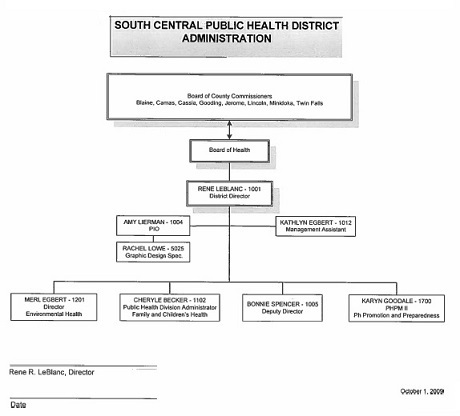 The following image was found on the Idaho Dept. of Health and Welfare website.  But notice that it says PUBLIC HEALTH in caps.   Since it is the PUBLIC HEALTH system that is bringing in refugees who would be the only source of Ebola in this country, this webpage can only be interpreted as an implied threat.  They are playing Russian roulette with us. 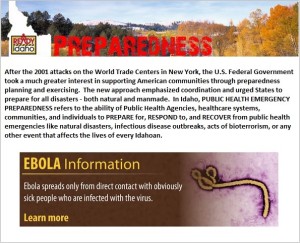 This brings me to John Agwunobi mentioned at the end of Part 1, as being appointed to be Assistant Secretary for Health (ASH) in 2005.  Recall that the Surgeon General reports to the ASH.

The following is an excerpt from the appointment notice that was posted on the White House website:

As a pediatrician, Dr. Agwunobi dedicated himself to working with underserved populations. Before moving to Florida, Dr. Agwunobi was Medical Director and Vice President of Medical Affairs and Patient Services at the Hospital for Sick Children, a Washington, DC-based pediatric rehabilitation hospital and community health care provider. He simultaneously served as medical director for an affiliated managed care plan, where he maintained a network of more than 2,300 physicians and specialists.

Dr. Agwunobi completed his pediatric residency at Howard University Hospital in Washington, DC, rotating between Children’s National Medical Center and the District of Columbia General Hospital–then one of the nation’s busiest inner-city hospitals. In addition to his medical degree, Dr. Agwunobi holds a Master of Business Administration degree from Georgetown University in Washington, DC, and a Master of Public Health degree from the Johns Hopkins School of Public Health in Baltimore, MD. He is also a certified managed care executive.

Dr. Agwunobi has been the recipient of numerous honors and awards, including Public Administrator of the Year, APHA Public Health Hero Citation, and Honorary Doctorate of Humane Letters. He previously served as Chair of the Centers for Disease Control and Prevention Advisory Committee to the Director, and on the Board of Directors of the National Quality Forum–an advisory group formed at the recommendation of the President’s Advisory Commission on Consumer Protection and Quality in the Health Care Industry.

Dr. Agwunobi has a passion for leadership and innovation and sees his role as Assistant Secretary for Health as an opportunity to enhance the Secretary’s efforts to further the mission of HHS and the health of the nation by building, strengthening, and leveraging relationships across the public health community and the US Public Health Service.

That’s a pretty impressive background.  So what’s wrong with it?   It’s too much.  It’s a pumped resume. He’s like the guy who lives in an average neighborhood that hasn’t worked in six months but shows up one day driving a brand new red Corvette.   The neighbor asks, ‘what did you do – rob a bank’?    What do you think?   Also, he was appointed to be the Assistant Secretary for Health and Human Services.   Assistant and Deputy Secretaries don’t normally get the kind of appointment notices that Agwunobi got regardless of their credentials.   Washington DC is about nothing if not protocol and pecking order.

So how is it that John Agwunobi came to my attention?   I wrote about it in a rant in 2009 that I called, Dear Diary.  The reason I did that is because I didn’t have anything solid to connect it to at the time.  The following is an excerpt from that commentary:

I first took notice of John Agwunobi when he was testifying to the Senate in a hearing in about 2005.  I was half paying attention up until the point when Senator Spector started questioning Agwunobi on his written statement where he wrote something about “not showing good faith” and Spector wanted to know what he meant.  As I recall, Spector said that the Congress had allocated about $4 billion towards national planning for a pandemic.  The request had apparently been for an amount in the vicinity of $15 billion.  Back then, a billion was a lot of money.  $4 billion was a stunning amount for “planning” and for a federal employee to tell the Congress that they weren’t showing good faith struck a sour note.  So I started watching the hearing.  As I listened to the questions and Agwunobi’s answers following, I thought to myself – this guy – Agwunobi is not a doctor.  I don’t know what’s going on – they’re calling him a doctor but for several of the questions, Dr. Julie Gerberding of the CDC had to answer for Agwunobi.  So I did a search on Agwunobi.

It turns out that Agwunobi was in Florida employed by the Public Health Department when the anthrax attacks occurred.  The day after his appointment, he was called upon to investigate the first anthrax attack.  Recall that Florida was already in a state of emergency prior to 9-11.  That’s mighty coincidental – although circumstantial.  Agwunobi is from Nigeria and he allegedly earned his degree in Public Health from Johns-Hopkins.  There are other things about Agwunobi that didn’t sit well with me – but after doing some reading, I thought I’d get back to him sometime in the future to write a webpage about him.  Then Dr. Elias Zerhouni came into my sights after watching the National Governor’s Association conference and hearing a presentation on the eHealth Initiative.  After watching that program and doing audio recordings of it, I wrote this webpage:   IBM and Dr. Mengele – Together Again    Here is the LINK to the C-Span NGA Conference where IBM and the Mayo Clinic did the presentation.

The power dynamics were wrong.  Senator Arlen Spector was one of the most powerful members of Congress and the Administration was Republican.   John Agwunobi’s written statement that Spector was questioning him about was both impudent and arrogant and yet, Spector took no notice of it except to ask what he meant and his question was not from a position of power as would normally be expected

[It should be noted that Agwunobi’s Florida biography says that he was born in Dundee, Scotland even though he attended school in Nigeria and Nigeria is where his father is a practicing physician.]

And of course, as we all know, George Bush was at the Emma E. Booker elementary school on 9/11.  The staging of the photo is important.  Notice on the blackboard behind George Bush’s head, it says ‘Reading Makes A Country Great’. 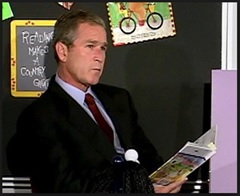 Recall that Richard Clarke made a big deal of the fact that nobody in the Bush Administration was listening to him or reading his reports but the May 8, 2001 press release would indicate otherwise.

The following is the press release issued by the Office of the Press Secretary:

For Immediate Release
Office of the Press Secretary
May 8, 2001

Statement by the President
Domestic Preparedness Against Weapons of Mass Destruction

Protecting America’s homeland and citizens from the threat of weapons of mass destruction is one of our Nation’s important national security challenges. Today, more nations possess chemical, biological, or nuclear weapons than ever before. Still others seek to join them. Most troubling of all, the list of these countries includes some of the world’s least-responsible states — states for whom terror and blackmail are a way of life. Some non-state terrorist groups have also demonstrated an interest in acquiring weapons of mass destruction….

Therefore, I have asked Vice President Cheney to oversee the development of a coordinated national effort so that we may do the very best possible job of protecting our people from catastrophic harm. I have also asked Joe Allbaugh, the Director of the Federal Emergency Management Agency, to create an Office of National Preparedness. This Office will be responsible for implementing the results of those parts of the national effort overseen by Vice President Cheney that deal with consequence management. Specifically it will coordinate all Federal programs dealing with weapons of mass destruction consequence management within the Departments of Defense, Health and Human Services, Justice, and Energy, the Environmental Protection Agency, and other federal agencies. The Office of National Preparedness will work closely with state and local governments to ensure their planning, training, and equipment needs are addressed. FEMA will also work closely with the Department of Justice, in its lead role for crisis management, to ensure that all facets of our response to the threat from weapons of mass destruction are coordinated and cohesive. I will periodically chair a meeting of the National Security Council to review these efforts.

Note:  I went back to find that video to get a clip.  C-Span edited the video.  The hearing may have been edited too but they can’t erase it from my mind.  I heard it and I watched it live.  It made an indelible mark in my memory banks.   Update 12/19/2021