In Al Gore’s 1992 book, Earth in the Balance in the chapter titled A New Common Purpose, Gore wrote:

“Adopting a central organizing principle—one agreed to voluntarily—means embarking on an all-out effort to use every policy and program, every law and institution, every treaty and alliance, in short, every means to halt the destruction of the environment and to preserve and nurture our ecological system.”

In the next chapter, titled A Global Marshall Plan, Gore talks about the post-World War II Marshall Plan to rebuild Europe (financed by the American people) and then he proposed a global version to re-build The Third World countries “to help impoverished nations achieve a stable population and a new pattern of sustainable economic progress” by allocating the money for transferring “environmentally helpful technologies” to them.   He continues,

“To work, however, any such effort will also require wealthy nations to make a transition themselves that will be in some ways more wrenching than that of the Third World.  Opposition to change is therefore strong, but this transition can and must occur—both in the developed and developing world. And when it does, it will likely be within a framework of global agreements that obligate all nations to act in concert.”

The end of the Cold War and the re-unification of Germany were the starting guns for these grandiose and delusional ideas.   In a 1992 speech to the United Nations titled Forging a Genuine Global Community, George Herbert Walker Bush said,

“Imperial communism may have been vanquished but that does not end the challenges of our age—challenges that must be overcome…we face the common economic challenge of promoting prosperity for all, of strengthening an open, growth-oriented, free-market international economic order while safeguarding the environment. 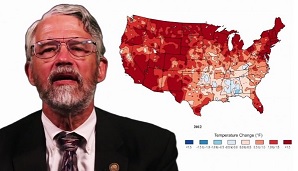 The speech that George HW Bush, Communist-in-Chief, gave to the United Nations that day is too important not to read in its entirety because he set the agenda for the nightmare that we are all living through to this very day which is a different form of communism.  It’s communism through scientific dictatorship hiding behind the politicians embedded within the government manifesting itself through the administrative-regulatory systems of government.  George Bush’s speech may be read as it was given HERE.    A highlighted version HERE.

Using climate change as a symbolic replacement for global communism in the United States seems to have begun in 1990 with the passage of The Global Change Research Act of 1990 which became Public Law 101-606. According to the history that was posted on the Global Change Research Information Office (GCRIO) website, the purpose of this legislation was:

. . . to require the establishment of a United States Global Change Research Program aimed at understanding and responding to global change, including the cumulative effects of human activities and natural processes on the environment, to promote discussions towards international protocols in global change research, and for other purposes.

. . . to disseminate to foreign governments, businesses, and institutions, as well as citizens of foreign countries, scientific research information available in the United States which would be useful in preventing, mitigating, or adapting to the effects of global change.

“Global Change” is a global term that encompasses everything.  If your mind is thinking in terms of the doctrine of radical environmentalism, you would think they are talking about global climate change – but it doesn’t say that.  It just says global change.   And it’s not rocket science to know that changing the organization of nation-states – dissolving and replacing them with regional, international “governance”, changing the foundational beliefs of people – reverting to a primitive system of earth worship – protecting the earth as the sole purpose for living, transferring wealth to other countries while managing the decline in their own standard of living, and changing the behaviors of people that were developed and shaped by the history, systems of government and societies in which they live would cause a few problems that would require some study and some very clever propaganda that explains to people why their world is being turned upside down.

Also in 1990, a movement began among college and university leaders following a conference to discuss the role of universities in environmental management and sustainable development.  The conference was held at Tufts European Center University in Talloires, France.  It was funded by grants from the Rockefeller Foundation, the EPA, and the John D. and Catherine T. Macarthur Foundation and it featured Maurice Strong as the keynote speaker.  At the time, Maurice Strong was the Secretary General of the United Nations Conference on Environment and Development which was to be held at Rio, Brazil in 1992.  From the history page of the Association of University Leaders for a Sustainable Future (USLF):

Assisted by internationally respected environmental leaders, the presidents explored the state of the natural environment, the impact of human population growth and economic activity on the environment, and strategies for the future.

The presidents discussed the role of education, research, policy formation, and information exchange in managing human impact on the environment. Since the majority of the presidents were from developing countries, concerns about resource depletion, poverty, and the need for substantial assistance from developed countries received equal attention with local, regional, and global pollution problems.

The output of the conference was the Talloires Declaration that had ten points with the tenth point being:

Establish a Secretariat and a steering committee to continue this momentum, and to inform and support each other’s efforts in carrying out this declaration.

The USLF was formed as the Secretariat for signatories to the Talloires Declaration which was the final push for a global scientific dictatorship – a global conspiracy for a global technocratic tyranny.

On April 21, 2017, John P. Holdren, Director of Obama’s White House Office of Science and Technology Policy (OSTP) and longest-serving Science Advisor to the President in the history of the position (dating back to World War II) gave an address to the American Association for the Advancement of Science (AAAS).   His purpose was to talk to them about Trump’s proposed budget cuts for the scientific dictatorship that has metastasized within the government.

At the beginning of his address, he said he was no longer constrained in what he says because he no longer works for government.  It’s a good thing for us because he explained the organizational structure that constitutes the technocratic tyranny.  I took a brief clip from his address, but you should really listen to his entire presentation – several times so that you digest the how the scientific dictatorship within our government operates.

What Holdren had to say was so intriguing, that I went back to the C-Span archives to see if there were other videos with him speaking.  There was one in July of 1991.  In that one however, there were equally interesting things being said by others in a hearing of the House Science Committee on global climate change – keeping in mind that the United Nations Rio Conference that produced Agenda 21 did not happen until 1992.  I took two clips of it but it’s worth watching the whole thing – or just the second panel which begins at 2:27 into the program if you have limited time.

In the first video, we find out where the pressure came from to adopt the global climate change BS.  Also, the House Member Scherer is very anxious to throw our national sovereignty out the window and to recognize global common law as it was under the British system.

In the second video, an economist talks about the “Redistribution of Rights”  which is a very, very clever way of not saying redistribution of wealth – but that’s what the result is.  And I say “is”  because when you put together the Talloires Declaration – a union of universities agreeing to indoctrinate students into “sustainable development” which is really radical environmentalism combined with a doctrine of redistribution of rights, I think you produce the Marxist social justice warriors who are demanding their own destruction.


On Saturday April 22, 2017, a day after John P. Holdren gave his address to the AAAS because of proposed budget cuts to the scientific dictatorship embedded within our government, a March for Science event was held in Washington DC.  Don’t miss it.