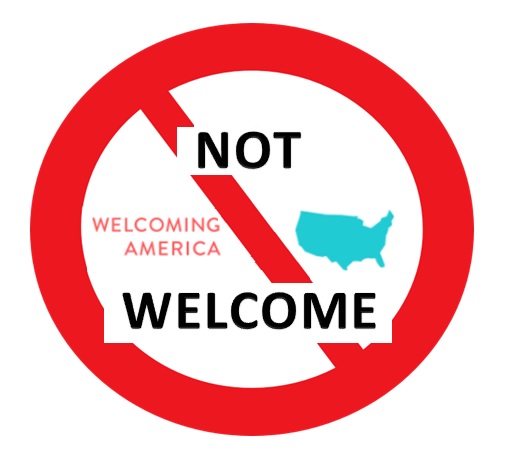 On May 1, 2017, the Twin Falls City Council had an agenda item for a resolution to make Twin Falls a Welcoming City.  This was the second time the resolution had been before the Council and by the time the meeting was over, the City Manager recommended that the vote on the resolution be postponed because there was not a consensus that Twin Falls, Idaho qualifies as a “welcoming community”.  That’s an understatement.   For two years a solid core of resisters to the socialist agenda of foreign occupation of at least two cities in Idaho have been steadfast in their opposition and that’s not going to change.

Welcoming America is a non-profit that was launched in 2009.  It is a creation of “social entrepreneurship“.   Social entrepreneurship applies a business concept – entrepreneurship with a socialist agenda.   It is a media campaign that sells socialist ideas.  In an honest world, it would be called propaganda and psychological warfare.  To oppose the Welcoming America concept, one must accept the label of being inhospitable.   That’s not a problem for this writer. I do not welcome the tools – refugees and foreign workers of the Socialist International; nor do I accept the occupation of my country by these tools of the Communist United Nations system.  And I consider it aiding and abetting the enemy to facilitate them in settling in the United States.

At 1:52, the young man in this video tells what this is about… breaking down the borders.

Several of the people at the City Council meeting asked why there needed to be a written resolution.  They did not receive a good answer because to answer it would require that the City Manager and/or the City Council members admit that they want to join an international network of cities.  The realignment of loyalties away from the Americans who inhabit our cities to a globalist network of cities is treason – plain and simple because the ultimate goal is a one-world “governance” structure under the communist United Nations system.  The cities will receive their global marching orders through the global information network.

The Resolution is the necessary paperwork to become a certified Welcoming City.  Passing the resolution is not the end of it – it is the beginning.   It is a step-by-step plan to destroy the United States as a nation-state; to destroy the American people and American culture; to erase our history and to create a new narrative for the socialist (communist) New World Order.

Certified Welcoming      The Twin Falls Resolution is the self-assessment required for certification.

On the Welcoming America website, a 21-page article was found titled, Framing the Conversation meaning that it was produced for propaganda purposes to “sell the idea” to constituents.

Notice that the German Marshall Fund is a “partner” along with another organization called the Heinrich Boll Stiftung.  Stiftung is the German word for Foundation.  (Donors to the UN OHCHR)

The German Marshall Fund established in 1972 was funded by the German government.  The intent was “payback” for the post World War II Marshall Fund to rebuild Europe allegedly.  The reality of the program was that the funds were used to diminish the sovereignty of European nations in order to build a “United States of Europe” – the European Union.

The flaw in “global governance” is that it cannot accommodate participation of the individual.   Non-governmental organizations (NGO) with Foundation funding are supposed to remedy this defect by representing the interests of groups of individuals.  It’s a fraudulent system because corporations, governments and wealthy individuals spawn these special interest groups like cockroaches breed and they do so for their own private interests.  What these vermin organizations excel at is media relations – propaganda, manipulation of perception and manufacturing the appearance of consent.

The Welcoming America organization is a classic example of a fraudulent grass-roots organization and actually, Welcoming America is a betrayal.  It’s treason against the American people and our government.  Obvious to all except the slavering, money grubbing dogs that are blinded by the cash, it’s not in the interest of the American people to support a foreign occupation of our country by members of a religious cult that carries it’s political and religious systems embedded within the religious doctrine.  Facilitating this occupation – importing the enemy is giving aid and comfort to the enemy – the linguistic fraud of a “war on terrorism” notwithstanding.  The tactic of this war on the American people is simply a numbers game – overwhelm our population – economically disempower us by taking our jobs and giving them to foreigners, bankrupt us by taxing us to pay for special services and needs of people completely unprepared for migration to the 21st century in the United States.

There is in the public domain, ample evidence of a seditious conspiracy that is usually referred to as globalism which by definition is the subversion of American sovereignty to foreign powers.  What follows serves as a brief introduction to the actions that brought us to this point of being a near-failed state with the last chapter yet to be written.