Home Idaho Idaho in the Context of Regionalism and Global Trade 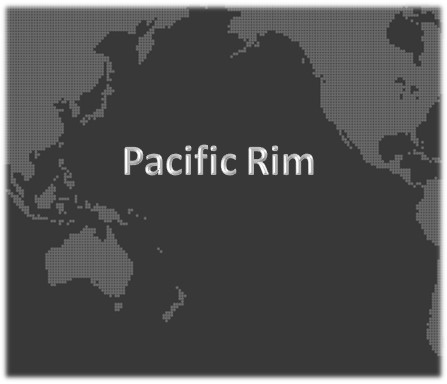 Idaho in the Context of Regionalism and Global Trade

This is the second article in a series that is being written about the Greater Idaho proposal.

Despite what the kindly old grandfather, Mike McCarter said in his presentation, the plan for Greater Idaho is not about family, faith and values.  If it was, McCarter and Simmons never would have gotten an audience with the Idaho legislature.  The fact that they did get time allocated by our busy legislators should be considered an indication that there is more to the story than what was presented.  The more to this story involves the global economic system and sub-regional trade zones.  At this point, a little history is in order. 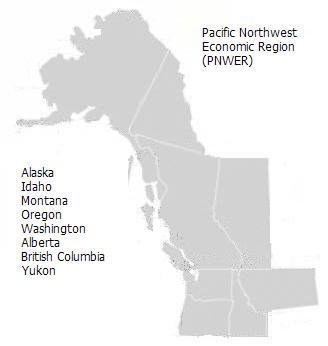 67-7801. LEGISLATIVE FINDINGS. The legislature finds that there is a new emerging global economy in which countries and regions located in specific areas of the world are forging new cooperative arrangements.

In 1991, the North American Free Trade Agreement (NAFTA) was still being negotiated and wouldn’t be signed into law until December 8, 1993.  That means the new cooperative arrangement about which they were speaking was the Asia-Pacific Economic Cooperation (APEC) organization. APEC was established in 1989 as an organization of member economies.

What does that mean?  An organization of member economies?

The Pacific Economic Cooperation Council (PECC) was formed in 1980 to “combine the knowledge and resources of businesses, research institutions and government agencies to develop new strategies for Asia-Pacific economic cooperation”.

In 1984, the US-PECC National Committee was established by Secretary of State George Shultz.   In 1989 when APEC was established, the following diagram shows the relationship between the PECC and APEC. 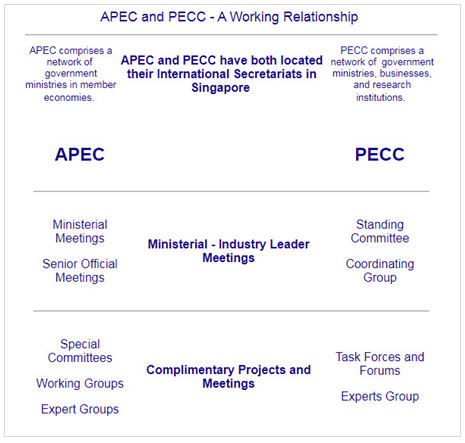 As a statutory public/private partnership, PNWER is unique in its design and purpose. Not only does it serve to facilitate cooperation and coordination among 5 U.S. states and 3 Canadian provinces and the Yukon, it also promotes communication between the public and private sector within these jurisdictions.

Page 3 of that background history has the following diagram: 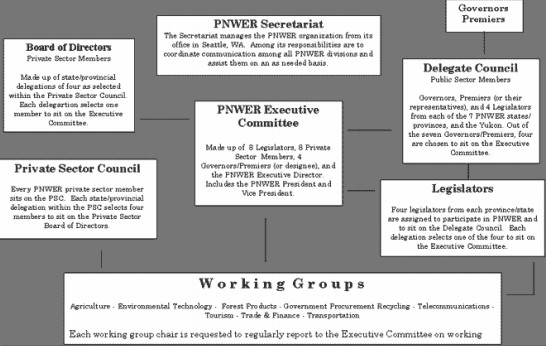 It should be obvious from the parallel structures of APEC-PECC and PNWER, that the PNWER  was formed as a North American  subregional, multijurisdictional clone for collaborative economic central planning for integration into a global economic system.

Going back to the presentation before the Idaho legislators, the first question was from Senator Michelle Sennett.  Her question (21:26) was What percentage of Oregon, Washington and California agree that they want to be part of Idaho?  While the focus of the presentation is on Oregon, in the discussion that followed, it came out that the map does include part of Washington State.  There was some discussion and some dodging by Mark Simmons (I know nothing) but in fact, the proposal for Greater Idaho does include references to Washington State participation.

It goes without saying, that what is discussed in public about anything political is different than what is discussed behind closed doors.  The inclusion of any part of Washington state draws together the majority of states in the PNWER.  The bizarre shape of Greater Oregon plus the mention of port access at Coos Bay Oregon when combined with an interstate compact that must be approved by Congress is a big clue that the real objective is a step towards formalizing the governance power of PNWER.  No doubt they are using the New York/New Jersey Port Authority interstate compact as model for the participating U.S. states.  The details of the compact will be negotiated behind closed doors.

The New York/New Jersey Port Authority was established by an interstate compact approved by Act of Congress in 1921 to administer harbor interests of New York and New Jersey.  It was the first interstate agency created under a clause of the Constitution that permits compacts between states with Congressional consent.

Step-by-step like thieves in the night, these public-private partnerships have been stealing our country out from under us – changing our form of government.  From the international level – to national, to state, to local, our elected, representative form of government based on fixed jurisdictional boundaries is being effectively dissolved and replaced by unaccountable, mostly invisible soviets (committees) that work for the profit of the member corporations with citizens being reduced to merely workers and consumers.