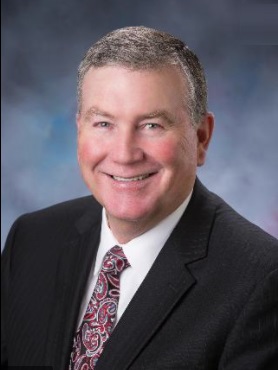 I watched yesterday’s Ethics Committee hearing on the complaint filed against Rep. Priscilla Giddings (R-7A). I had to do catch-up because I haven’t been following this soap opera. These are the facts as I’ve been able to discern them:

The Redoubt News wrote an article that included the name and picture of a young adult woman (Jane Doe) not employed by the state of Idaho who made a false allegation of a sexual nature against Rep. Von Ehlinger. The case against Von Ehlinger in brief:

There was rendezvous between Jane Doe and Von Ehlinger that did occur but it was consensual between adults. Much later – after the fact, Jane Doe reported to the police that it was not consensual but because of the time lapse and since Jane Doe had previously accepted cash and gifts with a monetary value from Von Ehlinger and other male members of the legislature, the police declined to prosecute. Following an Ethics Committee hearing in which Von Ehlinger was probably found guilty of behavior unbecoming of a member of the Idaho Legislature, he resigned. Case Closed.

Representative Priscilla Giddings saw the article in Redoubt News  and posted it to Facebook.  Facebook software automatically picks up the first picture it encounters in an article and posts it with the title of the story and a brief excerpt.  Giddings also put a link to the article in her constituent newsletter on activities in the legislature.   Giddings apparently posted a comment with the story that said “follow the money”.   The use of a cliché makes her guilty of stating the obvious but that’s hardly unethical.

Taking the advice and following the money, according to the testimony of Rep. Brook Green, she led the led the charge for an ethics violation against Giddings.  Both Giddings and Brook Green are rivals on the House Appropriations Committee.  That may not have been the money Giddings was talking about but in the piranha tank of politics, it’s close enough.  Green saw an opportunity to damage a rival House member and she took it.

The following is an image copy of the complaint filed against Mrs. Giddings keeping in mind that Rep. Giddings posted a link to an article on the Redoubt News website.  She did not write the article: 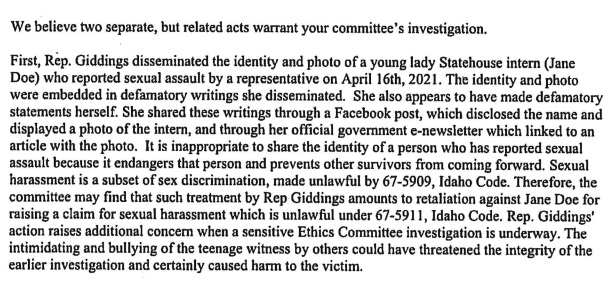 The first sentence makes it sound as if the report of sexual assault occurred on April 16, 2021. It didn’t. The accusation of assault occurred in March, the Ethics Committee had already held a hearing on that issue and the male legislator in question resigned and the Ethics Case was closed and over at the point Rep. Giddings posted the article on her Facebook page.

There should be an ethics case filed against the House members who signed this deceptive complaint. The “young lady” in question was not employed by the state of Idaho as an intern. She was apparently a volunteer working for Rep. Chad Christensen. She was a 19 year-old woman with a 3-year old child – bluntly stated, she’s been around the block.

The title of law cited in the Complaint is Title 67 – Commission on Human Rights:

My reading of this section of law is that it has to do with discrimination in employment and real estate but setting aside that misapplication of law, the first sentence says:

It shall be a prohibited act to discriminate against a person because of, or on a basis of, race, color, religion, sex or national origin, in any of the following subsections . . . [adding disability in the subsections].

Just going with that, it would be illegal discrimination against men to publically name a man – destroying his reputation and career without naming the female accuser who cried rape when those accusations could not be substantiated and by the known behavior of the female accepting monetary and non-monetary “gifts” from several of the male members of the legislature. Equal means equal. Look it up. Equal treatment under the law means that if a man was named publicly in an ethics complaint, then there should be no reason why the female shouldn’t be named also.  To do otherwise is discrimination against men.

This embarrassing and tawdry episode should be put to an end. Dismiss the ridiculous case against Rep. Priscilla Giddings. She did nothing wrong. The person who should resign from his position is House Speaker Scott Bedke. He is obviously unable to manage the affairs of the Idaho House of Representatives with the dignity and decorum owed to the people of Idaho.