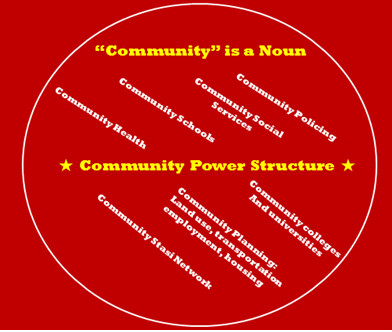 Community and Povertization for Power

The corruption of American society can be traced back to a program instituted during the Carter  Administration :  The Community Reinvestment Act (CRA), 1977.  That program was overhauled by the Clinton Administration.  The incentives provided by the Clinton “reforms”  were in direct opposition to traditional American values of success based on hard work, initiative and following the rules.

The system of community economic development money was initially targeted at the urban “distressed” areas and provided for revitalization through zone designation and a system of programs for re-development.  Chicago was the city selected to be first for this initiative but a few rural poverty pockets were included as well.   Banks were forced to participate through banking “reforms” that in plain terms amounted to regulatory bank robbery with corrupt government lawyers using the law as a weapon and government money as the incentive.

The CRA programs with federal money flowing into private hands actually encourages the povertization of American communities because poverty is what keeps the federal money flowing and their communist network of Community workers growing.  The Community also needs victims to serve with their social services network powered by federal and Foundation money.

The Clinton Administration coordinated the agencies of government for the alignment of government programs across agencies.  Once the zones are created, the money rolls in and the community programs are staffed, Community becomes a proper noun to define an unelected power structure with access to money and the law to enforce their will.  This is the means by which America is becoming communist right under the noses of the American people.

The following are the areas of Community corruption:

Community Social Services –  in addition to domestic social service programs, programs for refugee resettlement are included to ensure fresh supplies of poverty and degradation to keep/create new areas of distress.

In the last article on Community, it was documented that Eugene Ludwig changed the banking laws and he used regulatory authority to force the banks to meet lending objectives to people who were not credit worthy; the Community Reinvestment Act was changed . . .

On January 17, 1994, the White House Press Secretary issued a press release.  There were three sections to the release:

A major complicating factor in understanding this system of community corruption is globalization.  Globalization was the process of opening up the United States to internationalize commerce (i.e. borderless commerce).   The Marrakesh Agreement which the Congress voted on as H.R. 5110 – Uruguay Round Agreements Act Retirement Protection Act of 1994 was the final agreement in the Uruguay Round of trade that established the World Trade Organization opening up the American economy to be looted by foreign corporations – including American corporations operating behind a foreign facade and foreign countries operating behind a corporate facade.  It was Grand Theft Country and you can see who the traitors were who voted for it.

The torpedoing of our economy didn’t begin with this vote.  It was just the icing on the cake of our  destruction.  In 1990, legislation was passed that would ensure that our labor market would be swamped with foreign employment seekers (service providers).  The Immigration Act of 1990 opened the flood gates for the invasion of foreigners working and studying in the U.S. creating domestic poverty as Americans were displaced in the labor market.  This legislation included the “Diversity Visa” under the management of the U.S. Attorney General.  My guess would be that’s how Minnesota went from being the blondest state to being Somali-occupied territory.

Community is economic and social warfare on our domestic population.  Community has replaced the traditional American city/county government power structure with an:   in the open – but covert power structure.