In August 1968, former Canadian Prime Minister and Nobel Peace Prize winner, Honorable Lester Bowles Pearson, accepted an invitation from the President of the World Bank, Robert S. McNamara, to form an international commission “to review the impact of external assistance on the development of the poorer nations over the past two decades”, assess the results, and make recommendations for the future of aid and development.

The initiative for the Commission came from McNamara’s predecessor, George D. Woods. Amid international concern about declining foreign aid available from major donor countries, particularly during the declared United Nations Development Decade, President Woods explored different methods to increase development funding. In 1967, Woods spent a weekend at Sussex University to discuss these problems with a small group of individuals including diplomat William Clark and Barbara Ward, author of the UN Midterm Report on the Decade. The meeting resulted in the proposal for a commission of experts to examine the state of development and the steps necessary for maintaining hope and progress.

The Commission on International Development, also known as the Pearson Commission, was financed by the World Bank but operated as a completely independent body, just as its members were not representatives of their respective governments. Chairman Pearson had the authority to assemble the Commission members and by mid-October 1968, seven prominent international figures, each from a different country and background, had agreed to serve with Pearson in a non-official capacity. They were: Sir Edward Boyle (United Kingdom); Roberto de Oliveira Campos (Brazil); C. Douglas Dillon (United States); Dr. Wilfried Guth (West Germany); Sir W. Arthur Lewis (St. Lucia); Robert E. Marjolin (France); and Dr. Saburo Okita (Japan).

33 Recommendations for the World Bank

Many of the proposals would involve the leadership and support of international organizations including World Bank Group and Organization for Economic Co-operation and Development (OECD).

World Bank – Activities of the Commission on International Development,

Ottawa Citizen –  Smillie: Fifty years ago, Pearson identified a ‘crisis in aid.’ It’s still with us.

Durham E-Thesis:  The Pearson Commission, Aid Diplomacy and the Rise of the World Bank, 1966-1970 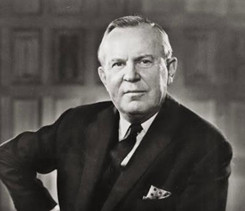 JFK Archives:  Prime Minister of Canada from 1963 to 1968
. . .  Served as first secretary of the Canadian High Commission in London, 1945 Attended founding conference of the United Nations, 1945-1946 Served as Canadian ambassador to the United States, 1946 Served as undersecretary of state for external affairs, 1948-1957 Served as secretary of state for external affairs, and was pivotal in establishing NATO, 1951-1952 Served as chairman of the NATO Council, 1952-1953 Served as president of the United Nations General Assembly, 1957 Received the Nobel Peace Prize in recognition of his peace-keeping efforts during the 1956 Suez Crisis, 1958-1968 Led the Liberal Party, April 1963 Won election as prime minister; the Liberal Party returned to power in a minority government, April 1968 Retired as prime minister.