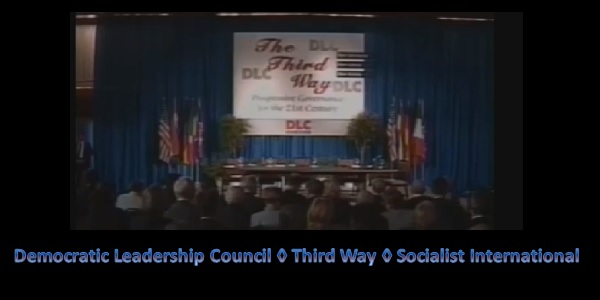 In the first article I wrote titled, The BLM: A Case Study in the Perversion of Government, I highlighted the fact that Bruce Babbitt, Secretary of the Interior in 1993 was a co-founding member of the Democratic Leadership Council (DLC). When Bill Clinton came into office, he was the Chairman of the DLC.

The germ cell for the DLC was a group of Democrats who were called the Atari Democrats. Atari was the first real computer game. Atari sought political support for what was then a budding technology industry located in Silicon Valley, CA. They wanted government support to ensure that the technology industry stayed in the U.S. rather than being moved offshore. A group of Democrats – Al Gore, Dick Gephardt, Tim Wirth, Gary Hart just to name a few, were all Atari Democrats.

Al From was the Chairman of the Democratic Caucus from 1981 to 1985. As a political strategist, after the loss of the 1980 and 1984 presidential elections, he formed the Democratic Leadership Council to “reinvent democrats” – casting off traditional liberal politics. The Atari Democrats were the core of the newly formed DLC forming the New Democrat Network (NDN).

Within the context of the DLC’s redefinition of the Democratic Party, there was a confluence of politics and ideology. The politics involved government support for the Silicon Valley technology companies and the ideology was environmentalism.   The combination of the two with the leaders of the DLC at the pinnacle of power gave rise to what has become essentially a new religion conceived in the delusionary sphere of gold fever. Big money buys true belief. The Earth Summit held in Rio de Janiero in 1992 took it global.

It was within that context that our government was “reinvented” during the Clinton Administration.   You can see from Al Gore’s First 100 Days in Office how they hit the ground running with the green-tech, reinvention of government agenda.   It was within this context that the Bureau of Land Management (BLM) – caretakers of the nation’s natural resources was “reinvented” under the leadership of DLC co-founder, Bruce Babbitt.

On June 1, 1998, the New Democrats Online had a description of what they called The Third Way. Third Way was the non-descript way they chose to label the movement described in the previous section. Below, in the description, they describe it this way:

The core principles and ideas of this “Third Way” movement are set forth in The New Progressive Declaration: A Political Philosophy for the Information Age.

The Declaration was an attempt to define a philosophical basis for the Third Way Movement which was more accurately defined by greed, avarice and a lust for power. The following is the text from the description of the Third Way posted on the New Democrats Online/Progressive Policy Institute website.

America and the world have changed dramatically in the closing decades of the 20th century. The industrial order of the 20th century is rapidly yielding to the networked “New Economy” of the 21st century. Our political and governing systems, however, have lagged behind the rest of society in adapting to these seismic shifts. They remain stuck in the left-right debates and the top-down bureaucracies of the industrial past.

The Democratic Leadership Council, and its affiliated think tank the Progressive Policy Institute, have been catalysts for modernizing politics and government. From their political analysis and policy innovations has emerged a progressive alternative to the worn-out dogmas of traditional liberalism and conservatism. The core principles and ideas of this “Third Way” movement are set forth in The New Progressive Declaration: A Political Philosophy for the Information Age.

Starting with Bill Clinton’s Presidential campaign in 1992, Third Way thinking is reshaping progressive politics throughout the world. Inspired by the example of Clinton and the New Democrats, Tony Blair in Britain led a revitalized New Labour party back to power in 1997. The victory of Gerhard Shroeder and the Social Democrats in Germany the next year confirmed the revival of center-left parties which either control or are part of the governing coalition forming throughout the European Union. From Latin America to Australia and New Zealand, Third Way ideas also are taking hold.

The conference mentioned above was held at the end of a week of conferences for the 50th Anniversary of NATO. NATO adopted and became the protector for the Third Way Movement.

The DLC Third Way event following the NATO conference is posted on C-Span and you really need to watch it to understand both the context within which our government was “redesigned” and how the American people became the enemies of their own government. The people didn’t change. The government did and it became a foreign and hostile government as we’ve witnessed in Oregon over the last month culminating with the arrest of Ammon Bundy and the murder of Lavoy Finicum.

I took a brief clip of the beginning and the end of the conference but really the entire conference should be viewed. For those in a hurry and those of you who are working on the issue of refugee resettlement, skip to the last 4 minutes or so and listen to Italian PM Massimo D’Alema. He was the most honest one on the panel.

The New Politics of Globalization
October 13, 1999