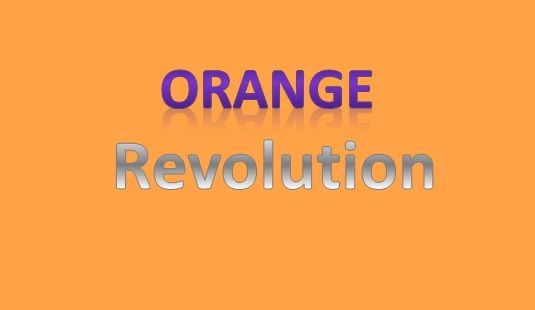 Because of the recent revelation of Lee Stranahan that the torch lit march in Charlottesville was right out of the playbook of the alleged neo-nazis of the Orange Color Revolution of the Ukraine, I went back to my older research and dug out the information I had on color revolutions.  Color revolutions always seem to start with allegations of election fraud.

The issue in Charlottesville was the removal of a historical statue but if it wasn’t that, it would have been something else.  The script calls for something to stir the passions of people so that they will turn out for an event.  Since this event follows on the heels of the unproven Russian hacking of our election system and with the connection to the Orange Revolution, it’s a pretty safe bet that the soldiers for Soros are trying to start a color revolution here so it behooves us to read about the revolution in the Ukraine so that we know the playbook.

In researching the North American Union, I came across a speech given by George W. Bush on June 6, 2005 to the OAS regarding the CAFTA agreement. Throughout the speech, he clearly is praising the efforts to create a North American Union. It’s a speech that should be read by every American citizen. But what caught my attention about the speech in particular was the reference to color revolutions and freedom on the march around the world.

The following is the excerpt from the speech:

“We come together at a great moment in history, when freedom is on the march around our world. In the last year-and-a-half — think about this — we’ve witnessed a Rose Revolution in Georgia, an Orange Revolution in Ukraine, a Purple Revolution in Iraq, a Tulip Revolution in Kyrgyzstan, a Cedar Revolution in Lebanon — and these are just the beginnings. Across Central Asia, hope is stirring at the prospect of change — and change will come. Across the broader Middle East, we are seeing the rise of a new generation whose hearts burn for freedom — and they will have it.” George W. Bush

The source philosophy behind the freedom on the march seems to be Baruch Spinosa.  I say that because Walter Wriston (Citibank) quoted Spinosa in his book, Twilight of Sovereignty and it fits what seems to be an agenda to extinguish the nation-state system of territorial organization.  As it pertains to the United States, the plan appears to be subversion of sovereignty and the break up of the U.S. into independent states – but not states in the sense we normally think.  The organization would be better described as economic units.  Using the break up of the Soviet Union, it would probably be something like the Commonwealth of Independent States of North America (under the regional soviets – economic partnerships between business and the “governing authorities”).

“The last end of the state is not to dominate men, nor restrain them by fear; rather, it is to set free each man from fear, that he may live and act with full security and without injury to himself or his neighbor . . . . The end of the state is really liberty”  Baruch Spinoza

What was the Orange Revolution?

Ukraine: Face of the Orange Revolution

Could the Orange Revolution Be Just a Mirage?

Ukraine after the Orange Revolution: Can it Complete Military Transformation and Join the U.S.-Led War on Terrorism?

CSM – Don’t Give Up On Ukraine’s Orange Revolution

Times UK – How the Orange Revolution Lost Its Juice

XXII Congress of Ukrainians of America held in Hartford

The Real Reason You Can’t Vote for an Independent Candidate