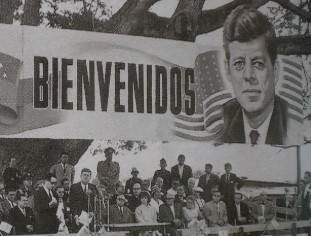 On March 13, 1961, President John F. Kennedy announced his Latin American agenda in an address and reception for members of Congress and Latin American republics’ diplomatic corps.  The following a excerpts from his speech or you can watch a video of the speech on the Miller Center website:

A Marshall Plan for Latin America

It is a great pleasure for Mrs. Kennedy and for me, for the Vice President and Mrs. Johnson, and for the Members of Congress, to welcome the Ambassadorial Corps of our Hemisphere, our long time friends, to the White House today. One hundred and thirty-nine years ago this week the United States, stirred by the heroic struggle of its fellow Americans, urged the independence and recognition of the new Latin American Republics. It was then, at the dawn of freedom throughout this hemisphere, that Bolivar spoke of his desire to see the Americas fashioned into the greatest region in the world, “greatest,” he said, “not so much by virtue of her area and her wealth, as by her freedom and her glory.”

. . . The genius of our scientists has given us the tools to bring abundance to our land, strength to our industry, and knowledge to our people. For the first time we have the capacity to strike off the remaining bonds of poverty and ignorance — to free our people for the spiritual and intellectual fulfillment which has always been the goal of our civilization.

. . . If we are to meet a problem so staggering in its dimensions, our approach must itself be equally bold — an approach consistent with the majestic concept of Operation Pan America. Therefore I have called on all people of the hemisphere to join in a new Alliance for Progress — Alianza para Progreso –a vast cooperative effort, unparalleled in magnitude and nobility of purpose, to satisfy the basic needs of the American people for homes, work and land, health and schools — techo, trabajo y tierra, salud y escuela.

Notice how Kennedy said he wanted to meet the basic needs of the American people but he was proposing the Marshall Plan for Latin America.  The Marshall Plan was the post World War II plan for rebuilding Europe.  Sub rosa, the Marshall Plan was a plan to build a United States of Europe using the money for rebuilding as leverage to get the crippled European nations to incrementally sign away their national sovereignty to an unelected commission that came to be known as the European Commission.  The coup d’grace on the independence of European nation-states came in 1992 with the Maastricht Treaty.

Kennedy’s plan for Latin America was a clone of the Marshall Plan.  While the media and American politicians peddled the lies of aid and trade, the objective was in fact, subversion of sovereignty first,  to form a Common Market of the Americas to be followed by the establishment of a Free Trade Area of the Americas which constitutes the end of nation-state sovereignty.

The Office of the Historian of the State Department wrote this about the Alliance for Progress:

Growing out of the fear of increased Soviet and Cuban influence in Latin America, the 1961-1969 Alliance for Progress was in essence a Marshall Plan for Latin America. The United States pledged $20 billion in assistance (grants and loans) and called upon the Latin American governments to provide $80 billion in investment funds for their economies. It was the biggest U.S. aid program toward the developing world up to that point–and called for substantial reform of Latin American institutions.

Washington policymakers saw the Alliance as a means of bulwarking capitalist economic growth, funding social reforms to help the poorest Latin Americans, promoting democracy–and strengthening ties between the United States and its neighbors. A key element of the Alliance was U.S. military assistance to friendly regimes in the region . . .

Although derided as “Kennedy’s Kiddie Corps” by some when it was established in 1961, the Peace Corps proved over time to be an important foreign policymaking institution. By sending intelligent, hard-working, and idealistic young Americans to do economic and social development work (on 2-year tours) in the areas of greatest need in the Third World, the Peace Corps provided a means by which young Americans could not only learn about the world, but promote positive change. A significant number of Peace Corps Volunteers went on to work as officials in the U.S. Government.

The truth about Kennedy’s announcement was that he was expressing his support continuing Eisenhower’s expressed policy of support for Operation Pan America in a statement given on July 11, 1960.

In September of 1960, the nations of the Organization of American States adopted a policy of “social and economic development” for the member Republics.

Act of Bogata – September 13, 1960 The Act of Bogata can be read on the Yale Law School, Avalon Project website.

Text of Act of Bogota, recommending Measures for Social Improvement and Economic Development within the Framework of Operation Pan America, adopted by the Council of the Organization of American States on September 13, 1960, and approved by the Council in a resolution dated October 11, 1960

In Remarks at the Protocolary Session of the Council of the Organization of American States given on April 14, 1961, Kennedy said the following:

Mr. Chairman, members of the Council of the Organization of .American States, Mr. Secretary General, ladies and gentlemen:

. . . There is in this last decade, or in the last few years, in the organizations of the hemisphere and in western Europe of the Atlantic Community, a strong pressure to develop new institutions which will bind us all closer together. I sometimes feel that it is our function and responsibility to use in a more effective manner the institutions we now have.

. . . Ambassador Lobo has suggested in his speech that we stand on the threshold of a new epoch in the development of the American Hemisphere. Science, and all the other things which have sprung from science, have brought a better life into the reach of every man and woman in our hemisphere.

. . . Our common purpose today is to harness these new aspirations and these new tools in a great inter-American effort–an effort to lift all the peoples of the Americas, including the people of my own country of the United States, into a new era of economic progress and social justice.

. . . This very week, in Rio de Janeiro, the assembled Governors of the Inter-American Development Bank–representing 20 American Republics–endorsed the principle that development planning on a country-by-country basis was vital to the success of an Alliance for Progress.

. . . Therefore I will shortly instruct the United States delegation to this Council to request a meeting of the Inter-American Economic and Social Council at the ministerial level.

. . . First, it should encourage all the free states of the hemisphere to set deadlines for the completion of preliminary plans for national economic development–as well as to begin long-range planning to meet the development needs of the rest of the decade.

On May 17, 1961, Kennedy gave an Address before the Canadian Parliament in Ottawa in which he proposed using the OECD – the institution originally established under the name OEEC for the Marshall Plan:

Through the Organization for Economic Cooperation and Development and the Development Assistance Group, we can pool our vast resources and skills, and make available the kind of long-term capital, planning and know-how without which these nations will never achieve independent and viable economies, and without which our efforts will be tragically wasted. I propose further that the OECD establish a Development Center, where citizens and officials, and students and professional men of the Atlantic area and the less-developed world can meet to study in common the problems of economic development.

OECD-DAC – 1996 – Shaping the 21st Century: The Contribution of Development Co-Operation (led to the Millennium Development Goals)

John F. Kennedy was elected to be President in November of 1960 – taking office in January 1961.  Keeping his campaign pledge for support for Operation Pan America under the marketing label, Alliance for Progress, Kennedy signed a big package of legislation to build the socialist organizational structure within the State Department to spend all of our tax money on Latin America.  The JFK Library has an extensive list of legislation that established the foreign aid infrastructure.  The title of the legislation was the Foreign Aid Authorization Act of 1961. An extract of the legislation can be viewed HERE.   A new agency, USAID was created by Executive Order 10973 to carry out the programs characterized as foreign aid. Later, the new agency was formalized into law.

A special meeting of the Inter-American Economic and Social Council was held in Punta del Este Uruguay. It began on August 5, 1961 and concluded on August 17, 1961 with the signing of a declaration and a charter by all members of the Organization of American states except Cuba.

The following are a few excerpts from the Charter of Punta del Este:

Chapter I. Basic Requirements for Economic and Social Development
The American Republics recognize that to achieve the foregoing goals it will be necessary:

1. That comprehensive and well-conceived national programs of economic and social development, aimed at the achievement of self-sustaining growth, be carried out in accordance with democratic principles.

1. Participating Latin American countries agree to introduce or strengthen systems for the preparation, execution, and periodic revision of national programs for economic and social development consistent with the principles, objectives, and requirements contained in this document.

a. Improvement of human resources and widening of opportunities by raising general standards of education and health; improving and extending technical education and professional training with emphasis on science and technology; providing adequate remuneration for work performed, encouraging the talents of managers, entrepreneurs, and wage earners; providing more productive employment for underemployed manpower; establishing effective systems of labor relations, and procedures for consultation and collaboration among public authorities, employer associations, and labor organizations; promoting the establishment and expansion of local institutions for basic and applied research; and improving the standards of public administration.

b. Wider development and more efficient use of natural resources, especially those which are now idle or under-utilized, including measures for the processing of raw materials.

Globalization and Linkages to 2020: Can Poor Countries and Poor People Prosper in the New Global Age? OECD, 18 April 1997,  DCD/DAC(97)13,
http://www.oecd.org/officialdocuments/publicdisplaydocumentpdf/?cote=DCD/DAC(97)13&docLanguage=En