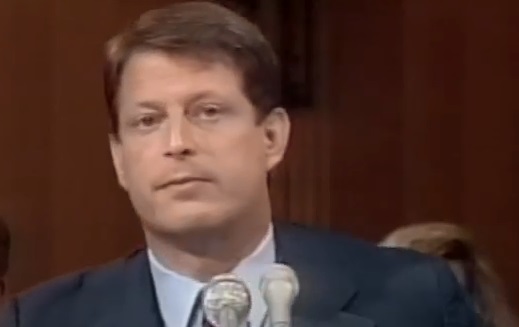 The Business of Social Control

The Earth Summit which Bob Cregan, President of the U.S. Business and Industry Council called the Environmental Woodstock began on June 3, 1992.  What Cregan had to say was prescient.   The purpose of the Earth Summit was to declare war on our economy and by extension, our way of life.  This is the video interview of Bob Cregan talking about the summit.

On June 2, 1992, Senator Al Gore appeared on C-Span to do an interview about the conference.  What Gore said in that interview should have been headline news in all the newspapers and on all TV and Radio news programs.  The headline should have been:

Gore was the Chairman of the Commerce, Science and Transportation Committee.   He led the Congressional Delegation that went to the Rio Summit because there were two treaties under consideration plus a third agreement concerning the management of forests.

The significance of what Al Gore said can’t be overstated.  At the time Gore did this interview, the organizing principle for the world was nation-states.  Nation-states were sovereign – deciding their own economic and natural resource policies.  The two treaties for Climate Change and Biodiversity were transferring sovereignty to collectivist global control by contract (treaty) essentially.  Treason by treaty.

About a week before Gore’s appearance on C-Span, MIT Professor Lester Thurow was the guest on Booknotes to talk about his new book: Head-to-Head: The Coming Economic Battle Among Japan, Europe and America.  Thurow explains the global economy and he offers the suggestion that what the United States needs to do is improve skills training at the bottom of the workforce.

It’s an absurd conclusion to the problem of the global economy as he describes it.  Thurow was simply adding the imprimatur of MIT to the strategy defined by the Workforce 2000: Work and Workers for the 21st Century commissioned by Labor Secretary William Brock, published in 1987.  Brock had been the U.S. Trade Representative at the time the Uruguay Round of trade was kicked off which would lead to the establishment of the World Trade Organization in 1995.  The Workforce 2000 report was equally absurd in conclusion at the time it was published.  Brock incidentally was from Tennessee same as Al Gore. You can read more about him and the labor game HERE.

The most significant piece of information from Lester Thurow was the Singapore meeting between Japanese and German business groups in 1990 recalling that Japan and Germany were allied against the western powers during World War II.  In 1989, the Berlin Wall came down, the two Germanys were reunited and in 1990 the Cold War was declared over.  Germany was set to dominate the European economy and apparently Japan was re-establishing the pre-World War II alliance against the United States – but with the battlefield being economic and with technology as the weapon.   The Japanese business group was led by Mitsubishi and the German business group was led by Deutche Bank and Daimler-Benz.

In 1990, President George H.W. Bush announced a new paradigm in transportation as an element of a new transportation system for the United States.  Not coincidentally, the European Commission announced the Trans-European Networks plan (Transport, Energy, Telecommunications – TEN-T) under the umbrella of the transportation system in the same year.   The European Road Transport Telematics Implementation Coordination Organization (ERTICO) was founded in 1991 as a multi-sector, public-private partnership pursuing development and deployment of ITS – Intelligent Transport Systems and Services.

Getting back to Al Gore, recall that Senator Gore was the Chairman of the Senate Commerce, Science and Transportation Committee in Congress.  As Chairman of the Committee, Al Gore was responsible for the legislation titled High Performance Computing Act of 1991 to fund and build a national – which turned into a global information infrastructure.   The following are highlights from his senate biography:

Vice President Gore also is a nationally recognized leader on technology. When he was a member of the U.S. Senate, Gore introduced and steered to passage the High Performance Computing Act to create a national, high-speed computer network and increase research and development of high-performance technologies. That legislation was signed into law in 1991, and is now part of President Clinton’s technology and economic plan, the National Information Infrastructure, to help move the United States into the 21st Century.

To help strengthen and support democracy and economic development in countries throughout the world, Vice President Gore proposed the development of a Global Information Infrastructure. He led the U.S. delegation to the inauguration of the first freely elected President of South Africa, Nelson Mandela, and has worked closely with Russian Prime Minister Viktor Chernomyrdin to build a partnership between the two former adversaries. The Gore-Chernomyrdin Commission was formed by Presidents Clinton and Yeltsin to foster economic cooperation between their nations, particularly on the issues of space cooperation, business, science and technology, defense conversion, energy and the environment. His leadership was critical in getting passage through Congress of the historic North American Free Trade Agreement.

The National Information Superhighway as they dubbed it was a prerequisite for the new paradigm in transportation systems announced by President Bush in 1990 and it mirrors the European TEN-T system.  Linking the systems would require a Global Information Infrastructure.  The punch line is that it was Congressman Norman Mineta who authored the transportation legislation, Intermodal Surface Transportation Efficiency Act of 1991 which was the first legislation for the new paradigm in transportation systems.  Mineta was the Congressman for the California district that included San Jose.  Recall that Mikhail Gorbachev gave a speech in San Jose in 1993 and the Mayor of San Jose, Tom McEnery wrote a book titled The New City-State.  That idea combined with the intermodal transportation design and the enterprise zones, you have all of the cannibalizing agents in place for the break up of the United States with technology systems in place to control the territory and the people after the fall.

Now turn your attention back to the Rio Summit.  On September 18, 1992, the U.S. Senate Foreign Relations Committee held a hearing on the Climate Change Treaty.  Al Gore testified at this hearing.  In the clip of this hearing, you’ll hear about Germany (Europe) and Japan and technology related to the environment, but the real story is technology for the conquer of the United States via the transportation system thereby meeting the goal of Maurice Strong to destroy the standard of living of the U.S. middle class – dropping us to third world standards. That meets the objective of Henry Morganthau’s plan for Germany following World War II – turn Germany into a pastoral state so that it could never rise again.  That’s what they are trying to do with the U.S. behind the environment-technology doctrine of maximum efficiency to “save the planet”.

Senate debate and vote on the UN Framework Convention on Climate Change adoption of Agenda 21.

C-Span interview with Liz Barratt-Brown, Atty for NRDC and Russell Train before the 1992 Rio Summit. Brown explains Agenda 21 and Train gives the real reason behind the Rio Summit – war on western mobility and standard of living. 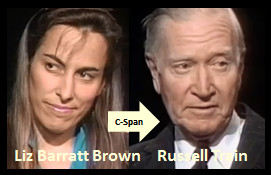 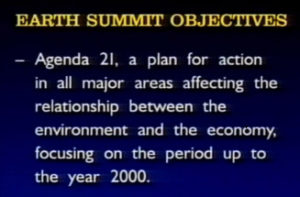 Maurice Strong – western lifestyles are unsustainable; must redistribute wealth from rich to poor; phase out fossil fuels. In other words – the west needs to commit economic suicide. 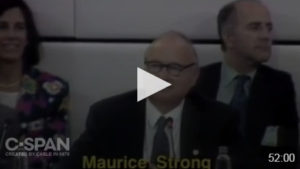