Home United Nations Impeachment: The Issue is not the Issue 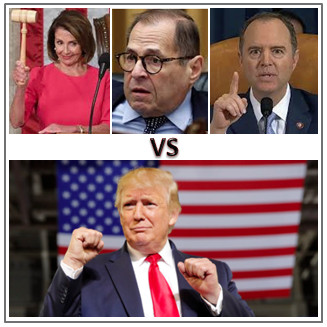 Impeachment: The Issue is not the Issue

The irony of the House Judiciary Committee holding an impeachment hearing with legal experts in which no legal facts pertaining to misconduct in office was topped off by Al Green’s statement following the hearing whining that there were no legal experts of color invited to testify.  This is a world gone mad.  This is a world in which emotion supersedes logic and reason.

One of the most absurd aspects of the hearing was that the Judiciary Committee considered it an impeachable offense that the Office of the Presidency was not responding to their subpoenas.  It seems that the Committee doesn’t comprehend the meaning of “co-equal branches”.  Co-Equal.   That means the President is not subject to the House Judiciary Committee.  The House Committee is trying to wield the power of the entire Congress when they don’t have the support of the entire Congress.  It’s not clear that they even have the support of the full House of Representatives.  They’ve seriously overstepped their bounds and they are making a mockery of our system of government.

Would somebody please tell the House Judiciary Committee that it is in the interest of the American people to find out if our elected officials are receiving bribe money and getting corrupt business deals through their relatives?  That’s obviously what Hunter and Joe were doing in Ukraine because Hunter Biden on his own credentials isn’t worth minimum wage to Burisma.  His only value is his connection to Joe, his father.

The Democrats are attempting to use a legal process to achieve a political goal.  The impeachment is in retaliation for their 2016 election failure.   They were so close to achieving nirvana – global governance and a world without borders they could taste it.  The United States was on its last legs and the left was massively importing foreign occupiers – the replacement population as fast as they possibly could.  They needed Hillary Clinton for the coup de grâce but they didn’t get it.  The American people voted for America.  They elected Donald Trump, an iconically alpha male.  The left has been insane ever since.

The case against Donald Trump has been a moving target that began almost immediately after the votes were counted with a story line of Russian interference in our election.  Another major issue between the socialist left and Americans has been the issue of the border, illegal immigration, the DACA program, refugee resettlement, etc.  Yesterday, as I was working on my website, I found an article from December of 2016.  UN Secretary General Ban Ki Moon was retiring.  His replacement was to be Antonio Guterres who was the UN High Commissioner for Refugees and a former officer of the Socialist International.   There was a link to a UN article about International Migrants Day.  Of special interest was this paragraph: 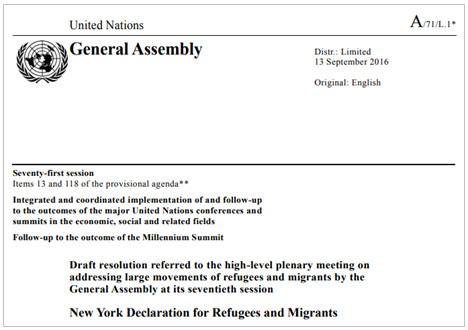 49. We commit to strengthening global governance of migration. We therefore warmly support and welcome the agreement to bring the International Organization for Migration, an organization regarded by its Member States as the global lead agency on migration, into a closer legal and working relationship with the United Nations as a related organization.11 We look forward to the implementation of this agreement, which will assist and protect migrants more comprehensively, help States to address migration issues and promote better coherence between migration and related policy domains.

This video is of the formal signing of the agreement for the International Organization for Migration (IOM) to become a United Nations Agency:

The video on the left is the UN High Commissioner for Refugees, Filippo Grandi talking about the expectations of the UN for the full (fully funded) integration and benefits for refugees.  The video on the right is a PBS interview of Grandi.

[Side Note:  dropping unequipped people from the third world into a modern 21st century economy presents lots of opportunities for social services (charity fronts on business) and higher taxes on the native population.  It’s a double whammy and that’s just the tip of the iceberg.]

The following is an extract from the Comprehensive Refugee Response Framework   They want all countries to establish class systems:  citizens and foreign workers with all the rights of citizenship except perhaps the right to vote but as we know, the socialists are working on that one.

At the heart of the CRRF and the GCR is the idea that refugees should be included in the communities from the very beginning. When refugees gain access to education and labour markets, they can build their skills and become self-reliant, contributing to local economies and fuelling the development of the communities hosting them. Allowing refugees to benefit from national services and integrating them into national development plans is essential for both refugees and the communities hosting them, and is consistent with the pledge to “leave no one behind” in the 2030 Agenda for Sustainable Development.

In the New York Declaration, Member States recognize that refugee camps “should be the exception,” and a temporary measure in cases of emergency. Instead, refugees should be allowed to live among host communities. By helping refugees thrive, not just survive, we can reduce the risk of protracted stays and lessen refugees’ dependence on humanitarian aid.

Refugee Process and Benefits   (written like a children’s guide because they don’t think you’re very smart).

It may be that Donald Trump’s real offense against the socialist left was to be the blockade to protect our country from a planned invasion of our country by the Socialist International now in formal relationship with the United Nations.   The agreement by the United Nations to add the International Organization on Migration (IOM) as a UN Agency affords the IOM legal support under the UN Charter, treaties and conventions for their planned redistribution of population.

Mass movements of civilians is a weapon against a country and its people and it has been used enough times in history for the pattern to be recognized no matter how well-educated and gentile the con artists are.

I’m sure the history books don’t say this specifically, but for both World War I and World War II, mass movements of people, I believe were the proximate causes of both wars and the IOM’s history is connected to both.   Create the problem by pushing populations out.  War in the receiving country.   Receiving country conquered if they are dumb enough to go along with the game. 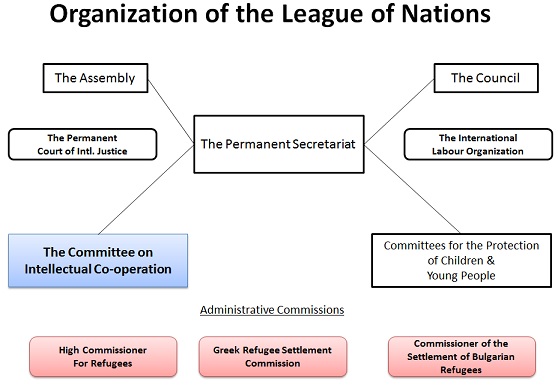 In late 2014, I began a research project to find out about the refugee program because refugees were being dumped in Idaho at a startling rate.  It was happening at a time when the Idaho economy was in decline.  That was the beginning of an odyssey for me.  It was an adventure into  uncharted territories.  It was around that time when I began to understand the full scope of the war on Americans.  That part of the war stopped when Donald Trump was elected.

Here is one of the articles I wrote about the beginnings of refugee resettlement.  In doing this research, it became clear that “human rights” at the global level was being used as a tool for the development of a global system of governing –  global totalitarian government and the U.S. has been a co-conspirator in it since the turn of the 20th century to the detriment of our country and our people.

America:  Dumping Ground for the World