Home Corruption Academia and The Bear: The Hidden Russian Collusion

Academia and The Bear: The Hidden Russian Collusion

In 1975, an east-west treaty was signed by Gerald Ford, Leonid Brezhnev, Helmut Schmidt and Eric Honecker. The name of the treaty was the Helsinki Final Act. The treaty called for cooperation and monitoring in three areas: security, economy and social – civil society which they labeled as the “human dimension”. In a statement inserted into the Congressional Record1 on the 30th anniversary of the signing, Senator Ben Cardin placed a statement in the record regarding the agreement and “the Moscow Movement”.

“The whole point of the Helsinki Accords is mutual monitoring, not mutual evasion of difficult problems.” A key to the ultimate success of the Helsinki Process has been the involvement of civil society—courageous human rights defenders like those who established the Moscow Group”

The emphasis should be on the word MUTUAL.  What they did in the Soviet Union, was done to the United States as well.

The National Endowment for Democracy (NED)2 was established by the Reagan Administration following the announcement of it in a speech given before the British Parliament in 1982.  After that speech, Reagan headed for Berlin to give a speech there.  Both speeches were given as a function of the campaign to end the Cold War between the east and the west.

The U.S. Department of Education was created by legislation passed in 1979 during the Carter Administration.  When Ronald Reagan ran for the presidency, one of his campaign promises was to dissolve the Department of Education and return control back to the states.     It was later discovered that the U.S. signed a cooperative education agreement with the Soviets in 1985 which negated the possibility of elimination of the U.S. Department of Education.  The 1985 agreement3 was for “contacts, exchanges, cooperation in scientific, educational, cultural and other fields”. This agreement was negotiated as a function of the Helsinki process under the Helsinki Final Act.  Charlotte Iserbyt became aware of the agreement and in 1987, she an a group of other education researchers published a full-page article warning the nation of the agreement.  The areas of cooperation included:

The agreement identified the private sector organizations that would define and coordinate the programs in their respective countries:

The American Council of Learned Societies and the Academy of Sciences of the Union of Soviet Socialist Republics;

Significant in the agreement is that the cooperation involved the exchange of professors, teachers and journalists.

“Parallel to the exchanges specified under paragraphs a and b above, the Parties note and encourage the exchange of scholars between the American Council of Learned Societies and the Academy of Sciences of the Union of Soviet Socialist Republics.”

The following is an interview that G. Edward Griffin did with Yuri Bezmenov in 1984.  Bezmenov was a KGB officer who defected to the west.  Canada gave him asylum.  The wiki page says Bezmenov died in 1970 and the person presenting himself as Yuri Bezmenov is a fraud but it doesn’t matter what his name is, he is brilliant and clearly an expert in Soviet psychological operations and methods for communist takeovers.

The Unifying Principle for the New World Order:  Climate Change

In 1989, Margaret Thatcher gave a speech at the UN in which she proclaimed that climate change was the most serious problem facing mankind.   The environment and man-caused planetary destruction knows no borders she proclaimed.   We shouldn’t blame the multi-national corporations however.  The problem is with “the little people”.

It’s obvious in hindsight, that through the cooperation agreements with the Soviets and Thatcher’s speech, the destruction of the environment (real, natural, terrorist or contrived) was chosen as the justification for changing our laws and the way we live to align with the dictates of the National Academy and Learned Societies and their communist Soviet comrades.  When scientists (alleged scientists) present “evidence” that is demonstrably false but cannot be questioned, it proves that the doctrine is politically motivated for a different purpose than that which is being articulated.  In other words, climate change is not about the weather.

You might be thinking… that’s a conspiracy theory.  Think again.   On the website of the International Institute for Applied Systems Analysis which began as a US-USSR cooperative scientific effort, the history says the following:

Founded to promote East-West scientific cooperation during the Cold War. Today, addressing the global challenges of the 21st century.

In October 1972, representatives of the Soviet Union, United States, and 10 other countries from the Eastern and Western blocs met in London to sign the charter establishing the International Institute for Applied Systems Analysis (IIASA). It was the culmination of six years’ effort by US President Lyndon Johnson and USSR Premier Alexey Kosygin, and marked the beginning of a remarkable project to use scientific cooperation to build bridges across the Cold War divide and to confront growing global problems on an international scale.

When the Cold War ended, IIASA’s sponsoring countries could have said “mission accomplished” and disbanded the Institute. However, as well as helping foster mutual understanding among scientists from East and West, IIASA had shown the scientific benefits of different nationalities and disciplines working together toward common goals. This approach has been widely imitated, for example, in the Intergovernmental Panel on Climate Change and the International Geosphere-Biosphere Programme.

The following are images of Charter for the IIASA.  It was divided into two panes for reading convenience.  Notice that in the objectives, the purpose given first is social followed by use of computer technology and modern management principles. 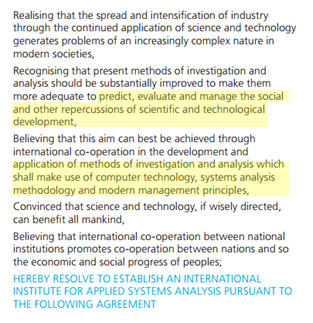 On the IIASA website under the Achievements section (archived page), it says the following about Climate Change:

The Intergovernmental Panel on Climate Change (IPCC) was established by the United Nations Environment Programme (UNEP) and the World Meteorological Organization (WMO) to provide the world with a clear scientific view on the current state of knowledge in climate change and its potential environmental and socioeconomic impacts.

Indeed IIASA’s pioneering research into climate change in the 1970s and 1980s played a key role in establishing the IPCC.

The webpage named an article titled 40 Years’ Research into Climate Change written in 2006 and published by Options Magazine.  It that describes the IIASA’s involvement in the Climate Change doctrine.  The following are significant excerpts from the article:

In the early 1970s warnings of global cooling appeared in the media, as some scientists concluded the Earth was gradually heading toward a new ice age. Yet, by the end of the decade, global warming was scientifically recognized as a major problem – IIASA research helped shift opinion toward “global warming.”

As the natural science of climate change began to come together in the mid-1970s, two key questions were raised that researchers had scarcely examined in any depth. What were the practical implications of climate change for human beings? And how could human beings influence climate change over the coming decades? After all, changes to the climate take place over decades and centuries, during which time societies and economies also change significantly.

In the 1970s IIASA provided the arena to bring together natural and social scientists. It also brought together different nationalities. “With something as global as climate, nobody would have got far without involving both the east and the west in sorting it out,” observes William C. Clark, a Harvard University professor, who was at IIASA in the 1970s and 1980s. At this time IIASA was one of only four international organizations working in this area, the other three being the United Nations Environment Programme, the World Meteorological Organization, and the International Council of Scientific Unions.

For governments, answers to these questions were crucial to bridging the gap between science and government policy. And so in 1978 the White House asked the United States National Academy of Sciences for advice on what was then called the carbon dioxide problem. The Academy appointed economist, Tom Schelling, now a Nobel Laureate, to investigate.

In his research, Schelling came across the International Institute for Applied Systems Analysis (IIASA) . . .

. . . IIASA’s models were just part of its larger investigation into the impact the world’s energy system would have on our climate, which in turn was part of IIASA’s, and indeed the world’s, first comprehensive, truly global assessment of energy issues.

. . . Other IIASA research in the 1970s was equally pioneering. At the beginning of the decade, there was the work of the man the Economist calls the father of climate change economics, Bill Nordhaus. Many of the currently dominant climate change policy models trace their conceptual and methodological roots to models developed by him at IIASA. “My own first serious research on global warming started when I spent a year in Vienna at IIASA,” remembers Nordhaus. “Research on global warming is deeply interdisciplinary, and IIASA at that time was uniquely able to foster interdisciplinary work. It was here that I published my first (and I believe the first) economic model of global warming as an IIASA working paper in 1975.”

IIASA played a key role, this time at an international conference in Villach, Austria, in 1985, where 89 scientists from 23 countries gathered to speak independently, free from government constraints. In a conference statement, the scientists forecast “significant warming” and warned climate change “would have profound effects on global ecosystems, agriculture, water resources and sea ice.” William C. Clark from IIASA was invited to give the keynote presentation on the practical implications of the carbon dioxide question.

The New Scientist writes that the Villach conference was key to recasting climate change as a problem for today and that it led to the establishment of the IPCC. Says Clark: “It moved the science into the policy arena.”

In doing this research on the IIASA and Climate Change, I found a reference to a song written by Donald Fagen:   IGY (What a wonderful world this will be).   The song was written and released in 1982 but it was in honor of the 1957 IGY – International Geophysical Year (IGY) 1957.  The article in the online encylopedia is a must read because it provides the context for what has become the global, scientific takeover of policy on everything with the academic community’s power to control our lives increasing every year since.

The IIASA is an institute of Systems Analysts and Scientists.  The shifting between social policy and scientific concepts is subtle but if you pay close attention to what they wrote, it’s relatively easy to discern that the “carbon dioxide problem” is symbolic for over-population.  The statement of “science moving into government policy”  means that scientists are defining the way we live and work and scientifically designed de-population is the number one item on the agenda.  It is demonstrably provable given that the reader has enough time and focus of mind to analyze it.  Since most people don’t have that kind of time, let your instincts work for you.  You know there is something wrong, but you don’t quite know what it is.  Now you do because I just told you.   Now you can listen to Donald Fagen and skip your way to oblivion.

Note:  there was a better video that had cartoon characters like the Jetson’s.  Using those characters and other clips the creator tells the story of the wonderful world that the scientific community as going to build.  After I found it, it was blocked worldwide.  (not kidding). 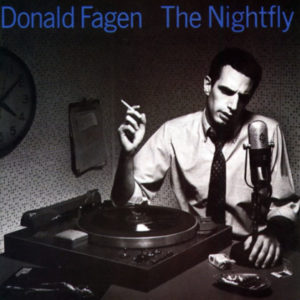 3 Co-Operation Agreement filed with the United Nations; Updated in 1988.

Title: Program of cooperation and exchanges between the United States of America and the Union of Soviet Socialist Republics for 1989-1991