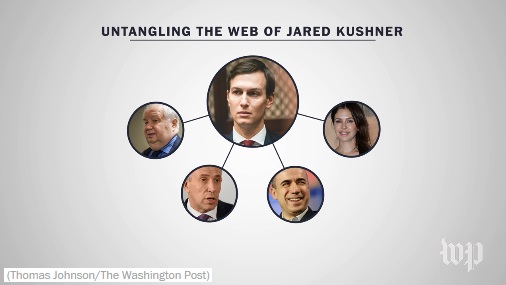 Oil vs Renewables – Russia vs China

I had to make a correction to what I wrote yesterday about the U.S. Power Problem.  It was 2012 that Donald Trump thought seriously about making a run for the presidency.  That change in the timeline is significant to the story of Jared Kushner, the Trump Administration, the Russians and the spy story set up by or through the FBI.  It’s also significant in the timeline of my research on intermodal commerce zones and Chinese investment in the U.S.  which came to light in 2010 in Idaho and has continued since then.

Russia has an economy that is dependent upon the sale of oil.

ST. PETERSBURG, Russia — The White House and a Russian state-owned bank have very different explanations for why the bank’s chief executive and Jared Kushner held a secret meeting during the presidential transition in December.

The bank maintained this week that the session was held as part of a new business strategy and was conducted with Kushner in his role as the head of his family’s real estate business. The White House says the meeting was unrelated to business and was one of many diplomatic encounters the soon-to-be presidential adviser was holding ahead of Donald Trump’s inauguration.

Officially, VEB is Russia’s state economic development bank, set up to make domestic and foreign investments that will boost the Russian economy.

The name of the bank in question is Vnesheconombank (VEB).  The significance of VEB being a development bank and Kushner’s business as a real estate developer for one thing is that Trump’s transportation budget calls for spending a trillion dollars on infrastructure with the U.S.  U.S. government putting in $200 billion of that money.  The balance – $800 billion would come from foreign direct investment.  During Trump’s State of the Union address, he bumped up the amount to a trillion and a half on infrastructure spending that the American people can’t afford.  Presumably that means $1.3 trillion of foreign direct investment in the U.S.

So what the issue comes down to is which country – Russia or China will provide the foreign direct investment funds and who will receive the benefit from it.  The whole story about Russian spies and collusion is horse hockey.  It has nothing to do with spying.  It does however have to do with connections and money.

Keeping in mind that Russia’s economy is dependent on selling oil, to understand the issue, we need to go back to 2011.  There is a video on C-Span to watch that will go a long way toward explaining the dispute between the Deep State and the Trump Administration.

That’s just the teaser.  There will be more coming shortly.