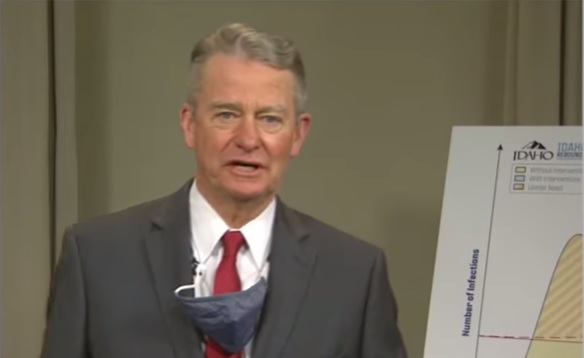 On December 10, 2020, Idaho Governor Brad Little held a press conference concerning the status of the COVID – alleged global pandemic in Idaho.  His main concern was compliance. It seems that a large and vocal segment of the population won’t comply with the tyranny of mask mandates and social distancing.  That’s a problem for the Little Governor.  It’s not a medical problem.  It’s a political problem.  Here’s what happened to precipitate the press conference –

The Central District Health (CDH) Board attempted to meet on December 8th, to decide on mandatory mask mandates that included fines and potential jail time for non-compliance.  The meeting was cut short because a large group of people held a protest outside the office of CDH and some of the protesters chose to protest outside the homes of two of the Board members:   Diane Lachiondo and Dr. Ted Epperly.

When you watch the video of the protest outside the home of Lachiondo, notice the woman speaking is conscious of the timing between the start of the meeting and the protest.

I was a talking to a friend about the meeting and he pointed at Ted Epperly as an interesting person to look at.  He sent a link to a video of Epperly from 2013.

Epperly’s description of the problems in our health care system are boilerplate.  I’ve heard the same things said by different people over the years.  The problem definition is roughly correct.  The solutions are psycho but put in a very appealing and empathetic way.  They care . . . they really care and they want to keep you healthy by spending all the health care dollars on a “wellness” system – a facade of a health care system. Notice that in his description of the new “wellness” system, there is no attempt to touch the profit margins of big pharma, the health insurers or the hospitals.

The shift in focus to wellness requires the implementation of a medical tyranny and you must comply with what they “recommend”.  I would have said “what the doctor ordered” but visits with a real doctor will be rare.  You’ll probably get to see a Physician’s Assistant or a Nurse Practitioner or maybe even a life couch to guide you to wellness.

If you do happen to get sick, it will be your own fault because you didn’t follow wellness orders.  You become a liability and the doctor will be penalized for having a sick patient.  He failed as a doctor and that affects his metrics.

Epperly’s presentation explains the Little Governor’s focus on compliance and behavior change.  For the system they’ve designed and in their dreams, everybody must grovel at the feet of the ‘wellness guru’ who will manage your biological life via the community health (no) care system.

I wrote about the legislation for the conversion of our health care system in 2008 when it was first being discussed.

The HAPI Plan for Mandatory Wellness

Central to the design of the new health (no) care system is the Community Health medical home.  They serve as the coordinators (gatekeepers) of access to other health care facilities.  Implicit in the design is that if you are judged not worthy of specialty care because you don’t follow “orders” for wellness, they may choose to not refer you to a specialty you need.

Note that in the CDH meeting, one of the invited speakers was Dr. David Peterman of the Primary Care Medical Group.  His organization is an example of community health.  He would be a beneficiary of the new health (no) care system.

The conversion of the health care system began in 1990 with an inquiry about the benefit of building a national medical records data base for medical research.  The justification was changed later to say that the reason was for efficiency and cost reduction due to elimination of paperwork.  That was absurd because the cost of a nationalized system of medical records for both the private sector and government was and is staggering not to mention the centralization of power, the loss of privacy and the nightmare of covert medical experimentation that becomes easily feasible.

The Human Genome Project was officially kicked off in 1990 even though the preparations for it were initiated in 1988 when the Department of Energy signed an MOU with the National Institutes of Health to jointly development an IT infrastructure for medical research – for mapping DNA.

When Bill Clinton came into office, one of his administration’s first initiatives was what became known as Hillary Care.  Hillary had nothing to do with it but it was named after her because she was going to be working with Ira Magaziner – the lead designer –  to write the legislation for it.   Hillary Care was not about health care reform.  It was about health insurance and the privatization of welfare health care insurance embedded behind a system of managed competition.

The system of Managed Competition was the system that Ted Epperly referred to as the system that was originally designed in 1961.  Alain Enthoven was one of designers of that system and he was an advocate for it when the design for it was presented as a component of Hillary Care.

Reinvention of Government and Global Health

Al Gore led the reinvention of government project.  Bill Clinton was just the “pretty face” in front.  David Osborne was Al Gore’s Principle Advisor on the reinvention project which was run out of the  National Academy of Public Administration (NAPA).  There was an alliance of corporations and universities that were leading the private side, technical aspect of the re-design effort.

There was a convergence between the redesign of our domestic government and the G7 decision to cooperatively develop global systems (1994).   Mostly what the filthy pigs did in the redesign effort was to locate all big pots of money in all sectors of our economy and they targeted those sectors – gutting them, destroying the middle class and opening our borders for foreign invasion.   The two biggest pots of money were health and education.

Enter Dr. Paul Farmer.  Here is the first paragraph from the Wiki article about Paul Farmer:

Paul Edward Farmer (born October 26, 1959) is an American medical anthropologist and physician. Farmer holds an MD and PhD from Harvard University, where he is the Kolokotrones University Professor and the chair of the Department of Global Health and Social Medicine at Harvard Medical School. He is co-founder and chief strategist of Partners In Health (PIH), an international non-profit organization that since 1987 has provided direct health care services and undertaken research and advocacy activities on behalf of those who are sick and living in poverty. He is professor of medicine and chief of the Division of Global Health Equity at Brigham and Women’s Hospital.

Recall that Michelle Obama was employed as the Vice President for Community and  External Affairs for the University of Chicago Hospitals “where she developed the University’s first office of community service“.

[Note to script writers:  defacing the Anne Frank memorial was gratuitous and illogical.  If any group fits the bill for the part of the Nazis, it’s the Boards of Health and our puppet governor.]

Protest at Diane Lachiondo home while the CDH meeting was being held at the CDH office.

Protest clips from the days preceding the CDH Board Meeting as well as the protest on December 8th, 2020

Video – Snippets of Governor Brad Little from the Press Conference