In 1983, when President Ronald Reagan signed the La Paz treaty with Mexico creating an international border zone, it was an attack on the structural integrity of the United States.  It set up an international  regime of authority over the border zone led by the U.S. Environmental Protection Agency and on the Mexican side, EPA Administrator and the Secretaria de Desarrollo Urbano y Ecologia, through the Subsecretaria de Ecologia.   See Article 8.    The treaty provided for the regime to receive private funding and to invite participants from outside the zone.  See articles 9 and 14.

In short, the “house of world order” will have to be built from the bottom up rather than from the top down. It will look like a great “booming, buzzing confusion,” to use William James’ famous description of reality, but an end run around national sovereignty, eroding it piece by piece, will accomplish much more than the old-fashioned frontal assault.  Foreign Affairs, Volume 52, No. 3,  1974, Richard Gardner, Hard Road to the New World Order

There was one Article in the La Paz Treaty that I noted but I didn’t have enough information to know the real significance of it at the time.  Excerpt from Article 1:

. . . and to provide the framework for development of a system of notification for emergency situations.

It’s an observed pattern that the subversive act of building a regional overlay system of “governance” begins with cross-jurisdictional agreements for the emergency 911 system and first responders.

Of course, anything to do with emergencies falls into FEMA’s jurisdiction.

Eric Holdeman is the Director of Center for Disaster Resilience (CRDR).  In 2005, he wrote an opinion piece for the Washington Post titled Destroying FEMA:

[Re: Hurricane Katrina]  Which makes it all the more difficult to understand why, at this moment, the country’s premier agency for dealing with such events — FEMA — is being, in effect, systematically downgraded and all but dismantled by the Department of Homeland Security.

Apparently homeland security now consists almost entirely of protection against terrorist acts. How else to explain why the Federal Emergency Management Agency will no longer be responsible for disaster preparedness? Given our country’s long record of natural disasters, how much sense does this make?

What Mr. Holdeman is describing is devolution – devolution of authority to regional entities.  Devolution is transferring authority and spending power from the federal government to unelected and by virtue of their international composition, un-American, regional public-private partnerships.

Devolution is another structural attack on the United States as a nation.  Devolution is followed by reorganization – privatized through associations and internationalized.

With benefit of hindsight, it’s easy to see that devolution of responsibility was so that international, regional public-private partnerships could be formed to take over the emergency management functions.  PNEMA  for the PNWER region is the model.

Organization building for health function began in 2002.  The U.S. liaison was the U.S. Public Health Service which was a branch of the military at the time (Pg. 8) of the Forging Ahead presentation.   Also note that on Page 5, they were going to implement the WHO’s 2005 International Health Regulation.

Preparedness planning was moved to the Department of Health and Human Services in 2005 and John Agwunobi was appointed to be the Assistant Secretary for Health.  I wrote about that in an article called The Public Health Menace.

This is not finished yet.  More will be added. 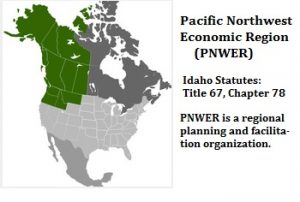 We don’t vote for any of these people.  We don’t know who they are.  We don’t recognize their organization because they are not state or federal.  They fall into a gray area sitting over the top of our governments.  They are an international regime.