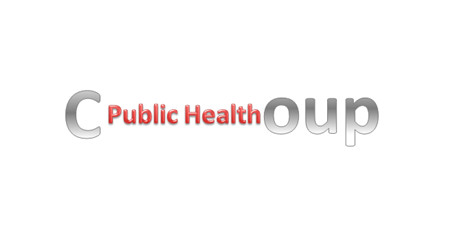 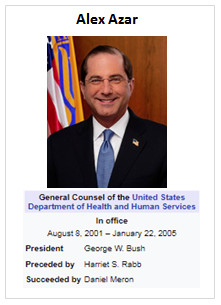 On September 11, 2001, Secretary of HHS, Tommy Thompson was scheduled to speak at a meeting of scientists about one of “his causes” which was going to be the development of a ubiquitous vaccine for the flu.  At 8:46 am, the first plane hit the WTC.  After the 2nd plane hit the WTC at 9:03 am, Thompson called his lawyers into his office and told them he wanted to call a National Health Emergency.   Who was the General Counsel for HHS at that time?   Alex Azar.

On January 31, 2020, the Secretary of Health and Human Services, Alex Azar, declared a national public health emergency.   Notice that the declaration was made retroactive to January 27, 2020.

Arizona, California cases push US tally of new virus to 5

Virus death toll in China rises as US prepares evacuation

The government [Chinese] said early Monday the death toll had risen to 80, with 2,744 confirmed cases.

The new virus comes from a large family of what are known as coronaviruses, some causing nothing worse than a cold. It causes cold- and flu-like symptoms, including cough and fever, and in more severe cases, shortness of breath. It can worsen to pneumonia, which can be fatal.

. . . It is not clear how lethal the new coronavirus is or even whether it is as dangerous as the ordinary flu, which kills tens of thousands of people every year in the U.S. alone.

The mobilization’s first wave involved more than 600 medical specialists sent to New York City, Washington and Pennsylvania from various HHS departments, he said. More than 300 of those are part of Disaster Medical Assistance Teams — doctors, nurses and emergency medical technicians trained to deal with traumatic injuries.

If more medical workers are needed, there’s plenty in reserve, Thompson said. He activated the National Disaster Medical System for the first time in its history, putting 80 teams of physicians on call to go where they’re needed. Thompson also has put the Public Health Service Commissioned Corps on alert, with 800 officers ready for immediate deployment. The U.S. Navy hospital ship U.S.S. Comfort is available, he said.

The former U.S. Secretary of Health and Human Services spoke of how he worked with Powell on creating a Global Fund in 2002 to provide treatments for those in nations suffering from AIDS, tuberculosis and malaria.

“We took the idea to President Bush, and with General Powell’s advocacy, we helped make this idea from Kofi Annan of the U.N. a reality,” Thompson stated. “The Global Fund partnership has since saved 44 million lives. The country could always count on General Powell, and I was witness to his extraordinary leadership.”

CNN: There are 19 people under investigation for coronavirus in Ontario, January 27, 2020

Ontario’s Chief Medical Officer of Health Dr. David Williams said there were 19 people under investigation for coronavirus in the province at the moment.

What that means: Dr. Williams said that for a person to be “under investigation,” they must have both signs or symptoms of a respiratory condition and a travel history that is “of importance, which is to Wuhan or around the district of the Hubei province.”

He added that people being investigated for coronavirus will undergo a battery of health tests to rule out other causes.

Why would you have to rule out other causes if there was a definitive test?

When diplomats met to form the United Nations in 1945, one of the things they discussed was setting up a global health organization.

WHO’s Constitution came into force on 7 April 1948 – a date we now celebrate every year as World Health Day.

In April 1945, during the Conference to set up the United Nations (UN) held in San Francisco, representatives of Brazil and China proposed that an international health organization be established and a conference to frame its constitution convened.

WHO Milestones for 70 years  –  note in particular:

1978 – International Conference on Primary Health Care in Alma-Ata, Declaration of Alma Ata, Health for All – Health as a human right,

2010 – The objective is a move towards universal health coverage  (for the U.S. read Obama Care).

2018 – WHO recommits to the goal of health for all through focused action towards universal health coverage.

WHO delivered the anthrax? The Mailman

Columbia University: The World Health Organization was created in 1948 to coordinate health affairs within the United Nations system. Its initial priorities were malaria, tuberculosis, venereal disease and other communicable diseases, plus women and children’s health, nutrition and sanitation. From the start, it worked with member countries to identify and address public health issues, support health research and issue guidelines. It also classified diseases. In addition to governments, WHO coordinated with other UN agencies, donors, non-governmental organizations (NGOs) and the private sector.

By 2003 WHO, headquartered in Geneva, was organized into 141 country offices which reported to six regional offices. It had 192 member countries and employed about 8,000 doctors, scientists, epidemiologists, managers and administrators worldwide; the budget for 2002-2003 was $2.23 billion.[3] Its director general was Gro Harlem Brundtland, a medical doctor and former prime minister of Norway.

Networks. A 1995 outbreak of Ebola virus in the Congo, which raged for three months unbeknownst to WHO, revealed a startling lack of global public health surveillance and notification systems. So in 1997, WHO (in collaboration with Canada) rolled out the Global Public Health Intelligence Network (GPHIN), which took advantage of information on the Internet to function as an early warning system for potential epidemics. Among other strengths, GPHIN could pick up even cases not officially reported if they were mentioned in blogs or online postings. WHO supplemented this in 2000 with the Global Outbreak Alert Response Network (GOARN) to analyze events once they were detected. GOARN linked 120 networks and institutes with the data, laboratories, skills and experience to take action swiftly in a crisis.

Did Canada wag the dog?

On December 31, 2019, the GPHIN software application detected the emergence of an unusual respiratory phenomenon in Wuhan, China; this viral outbreak was subsequently termed COVID‑19.

Originally developed by the Government of Canada in collaboration with the World Health Organization (WHO), the GPHIN system was recognized by the WHO as the organization’s “single most important reporting source for identifying potential (international infectious disease) outbreaks.”

On December 31, 2019, the GPHIN software application detected the emergence of an unusual respiratory phenomenon in Wuhan, China; this viral outbreak was subsequently termed COVID‑19.

Mission – GPHIN’s mission is to be an indispensable source of early warning for potential public health threats worldwide including chemical, biological, radiological and nuclear (CBRN).

The Global Public Health Intelligence Network (GPHIN) was set up as a global network of connected professionals working to rapidly detect, identify, assess, prevent and mitigate threats to human health. Formed in the late 1990s by the Government of Canada (Health Canada) in collaboration with the World Health Organization, GPHIN is headquartered at the Public Health Agency of Canada in Ottawa, Ontario, Canada, with members both nationally and globally. To facilitate its activities, an automated Web-based system, accessible to members of the network, was developed to help collect, collate and filter media reports from around the globe.

Who manages GPHIN?
GPHIN is managed by the Public Health Agency of Canada’s (PHAC) Centre for Emergency Preparedness and Response (CEPR), which was created in July 2000 to serve as Canada’s central coordinating point for public health security. It is considered a centre of expertise in the area of civic emergencies including natural disasters and malicious acts with health repercussions. CEPR offers a number of supports to municipalities, provinces and territories, and other partners involved in first response and public health security. This is achieved through its network of public health, emergency health services, and emergency social services contacts.

Forty years ago, the 134 national government members of the WHO signed the Alma Ata Declaration. The Declaration made Primary Health Care (PHC) the official health policy of all members countries. Emerging from the conference was the consensus that health was a human right based on the principles of equity and community participation. Alma Ata broadened the perception of health beyond doctors and hospitals to social determinants and social justice. 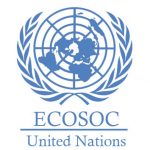 After listening to this video at the 50 year anniversary of President Kennedy’s  establishment of the Peace Corp with Elaine Chao talking about “white people” plus the undeclared movement to implement third world community health care in the United States, I see what’s happening.   It’s a head spinner.  It was “white culture” and government sponsorship of the “missionary mission” in the third world that has been turned against our culture as they attempt to replicate the missionary mission here.  The missionary mission here is being implemented by the Public Health System.   Their objective is to take over the “management” of people via environment and public health systems.

Poverty creation in the U.S. is highly profitable for the wealthy and their children at the (allegedly) elite universities.

Community Health in the U.S. 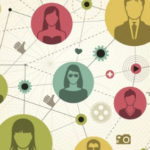 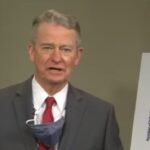 What’s happening is that our system of health care – including insurance has been converted to be aligned with the international system under the WHO.  The Public Health Officials have been made independent operators so that they could adhere to international law.  The federal elected officials who voted on the legislation and these policies apparently thought we wouldn’t notice foreign international edicts from the WHO and their Public Health tools if the edicts came from the mouths of Americans.   WRONG you stupid bastards.

I have too many articles that I’ve written at the systems level.  Just consider them all included here and if you don’t believe me, go do your own research.  Maybe I’ll add to this later but I’m too disgusted to continue at this point.