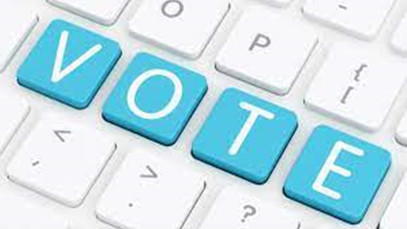 Mike Lindell’s Cyber Symposium has been broadcast over the last few days to show and tell to the public, how the last election was manipulated to achieve a pre-determined outcome.  The case was made as far as this writer is concerned with the presentation of Dr. Frank talking about the voter rolls and the algorithms.  The following is Dr. Frank’s presentation:

When this article was originally published, I didn’t have a recording of Dr. Frank’s presentation so I went to the Internet Archive to look at Dominion’s website.  Dominion was apparently established in 2003 but they didn’t have a website until 2006.  Right there on the front page, it lists Everywhere Voting as a feature of the system.  When you click the link, you get the page that describes the feature: 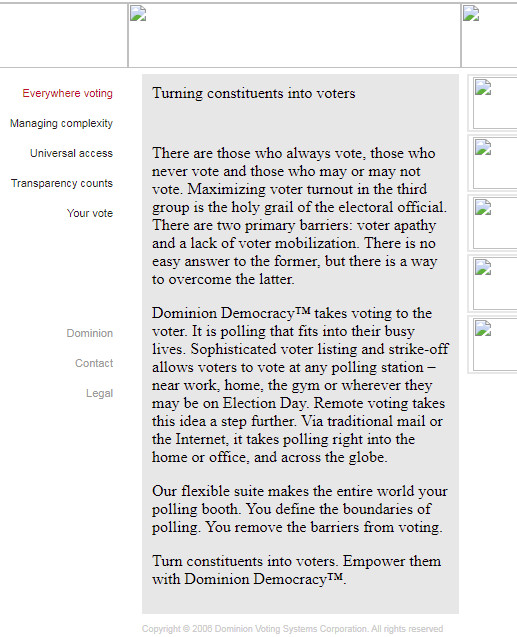 Remote voting was the selling feature of the Dominion Voting system from the beginning!

In order for the remote voting feature to work, the software has to have access to the voter roles; they have to have available both wireless and wired telecommunications capability; and they have to have a ‘voted register’ that would prevent a voter from voting twice.  That capability would have to be a ledger type system such as that used for bitcoin transactions.

The Help America Vote Act of 2002 (HAVA) required the states to have a statewide voter registration data base that would be easily accessible to everybody who had even the slightest interest in it.  The Brennan Center for Justice, NYU School of Law, posted a Fact Sheet of the state requirements for HAVA:

• By January 1, 2004, or January 6, 2004 if the State receives a waiver, states must establish a computerized, statewide voter registration list to allow faster, more reliable, and centralized registration of voters.

Given that all those capabilities are easily available, the idea of algorithmic analysis of voter registration and voting habits data for manipulation of votes in select critical counties is no stretch at all – in fact, it would be surprising if they didn’t do it because of the stakes involved and the barriers to auditing the votes.  Note:  Cooperation with this kind of voting fraud isn’t a democrat/republican thing.  Rather it’s a globalist vs nationalist.  Corrupt vs non-corrupt.

The nationalization of elections has been an issue since the hanging chad debacle in Florida in the year 2000 although it was never discussed in that straightforward and honest way. Incrementally though, that has been the goal beginning with the HAVA Act of 2002.

The Treasure Hunt for Clues

The first thing – look up the word “dominion”.   What is the definition?

Next, I went back to the Dominion website in the Internet Archive for the year 2016.   After looking at the bio’s of the principles of the corporation the following are the extracted key credentials to pursue that tell you who these people are:

John Poulous, Canadian; Dominion is a North American Company specializing in technology, media telecommunications.  He got his Master of Business Administration from INSEAD in France.  (Research INSEAD University – viper’s nest for globalism).

Ian Macvicar, background investment and merchant banking, Ian is a Chartered Accountant, and graduated from Queen’s University with an Honors Bachelor of Commerce.

Howard Cramer, spent over two decades working to help jurisdictions from all over the world meet their election needs.

Jean-Pierre Kingsley, prior to his involvement with Dominion, Jean-Pierre was the President and CEO of the International Foundation for Electoral Systems (IFES) in Washington D.C., and prior to that, he was Chief Electoral Officer of Canada for 17 years. In 2007, Jean-Pierre was awarded the Mexican Order of the Aztec Eagle, the highest award the Mexican government bestows on foreign nationals. Jean-Pierre was Head of Mission for the Organization of Security and Co-operation in Europe (OSCE) to evaluate the elections in Portugal in September 2009 and the elections in the United Kingdom in May 2010.

Recall that NIST was the agency charged with coordinating the development of integrated global systems.   If you are a globalist, what is the one system that you’d be likely to target for a global/North American system?    If it takes you more than a second to figure it out, just go back to watching TV.

Another in your face clue:  Who is  International Foundation for Election Systems (IFES)?  Make sure to scroll down to see who supports them.

Next, I clicked on the PRODUCTS section of the website.  What do I see that captures my attention:

Developed from the ground-up as an integrated system, Democracy Suite® was created specifically with present and future customer needs in mind. It is not wrapped around a legacy platform nor an outdated software and hardware engineering effort. Instead, Dominion believes that election officials need something new and robust, adapted to market conditions and trends.

Dominion’s Democracy Suite® system is VVSG 2005 certified by the US Elections Assistance Commission. For more information about the EAC and voting system certification, please click here.

Next, who is the Elections Assistance Commission?

The U.S. Election Assistance Commission (EAC) was established by the Help America Vote Act of 2002 (HAVA). EAC is an independent, bipartisan commission charged with developing guidance to meet HAVA requirements, adopting voluntary voting system guidelines, and serving as a national clearinghouse of information on election administration. EAC also accredits testing laboratories and certifies voting systems, as well as audits the use of HAVA funds.

Other responsibilities include maintaining the national mail voter registration form developed in accordance with the National Voter Registration Act of 1993.

1993 was the year when the Clinton-Gore Administration was getting rolling on the “reinvention of government”.  They planned on a revolution in the way government functions.  That translated in the redesign and integration of government computer systems in partnership with corporations.  Government did not have the capability to design and implement big systems like they wanted so they partnered with the big tech companies to do it.  Here is just one article but I have many, many more:

Next question, who is on the Election Assistance Commission?

When the media covers an issue and it takes on circus like characteristics, something of a national nature is afoot. Do you remember in 2017 when the main stream media mantra of the day was Russia, Russia, Russia hacking the elections? (This time the circus message the alternative media and it’s China, China, China hacking the elections.) So who is really trying to nationalize our elections? Homescam Security. In the article on Russia, I found a Christian Science Monitor event at which Homescam Security Director Jeh Johnson talked about declaring our election systems as critical infrastructure. The designation of anything as critical infrastructure makes it a target for a Homescam Security takeover. Homescam Security is the civilian face on the military. Protection of critical infrastructure began as a counter-terrorism measure with PDD-39 in 1995 after the bombing of the Murrah Building in Oklahoma City. The concept stripped to its essence was the initiation of a totalitarian system of surveillance and information control marketed as defensive when it reality, it was an offensive campaign against the American people themselves. In other words, coup d’etat by information systems and technology.

It was also in 1995 that Clinton and Gore agreed to the development of Global Systems.

Back to the symposium –

One of the presentations was given by Dr. Shiva Ayyadurai who I consider to be a dangerous con man who is aware of the technocratic coup on our country at least in one area – personalized medicine which I won’t go into here, but he did us all a favor by talking about two reports he found that he used in his lawsuit. The two reports have to do with elections and the unholy alliance between Homescam Security and the social media companies. It’s noteworthy that the reports are posted on Harvard’s Belfer Center and Stanford’s Freeman Spogli Institute for International Studies websites. Why is that noteworthy? The Belfer Center and Stanford were the locations Sec. Def. William Perry’s Preventative Defense Project. 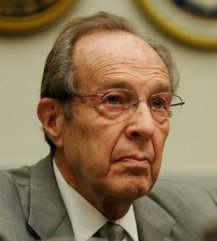 The Preventive Defense Project is a research collaboration of Stanford University and Harvard University’s Kennedy School of Government, co-directed by William J. Perry and Ashton B. Carter. Preventive Defense is a concept for American defense strategy in the post-Cold War era, premised on the belief that the absence of an imminent, major, traditional military threat to American security presents today’s leaders with an unaccustomed challenge and opportunity to prevent future Cold War-scale threats to international security from emerging . . . The Project is a multi-year effort supported by the Carnegie Corporation of New York, the John D. and Catherine T. MacArthur Foundation, the Packard Foundation, the W. Alton Jones Foundation, the Nuclear Threat Initiative, the Compton Foundation, Inc., and private sources.

Can you spot a theme running through all of these election dialectics (hint:  nationalization and actually globalization of election management – and who would lead it?   Homescam Security of course. And we know how reliable they are by watching our southern border.  The “preventative” part of preventative defense is to prevent the American people from saving our country from annihilation.).

The Long Fuse: Misinformation and the 2020 Election

US elections are decentralized: almost 10,000 state and local election offces are primarily responsible for the operation of elections. Dozens of federal agencies support this effort, including the Cybersecurity and Infrastructure Security Agency (CISA) within the Department of Homeland Security, the United States Election Assistance Commission (EAC), the FBI, the Department of Justice, and the Department of Defense. However, none of these federal agencies has a focus on, or authority regarding, election misinformation originating from domestic sources within the United States. This limited federal role reveals a critical gap for non-governmental entities to fill. Increasingly pervasive mis- and disinformation, both foreign and domestic, creates an urgent need for collaboration across government, civil society, media, and social media platforms.

The Election Integrity Partnership, comprising organizations that specialize in understanding those information dynamics, aimed to create a model for whole-of-society collaboration and facilitate cooperation among partners dedicated to a free and fair election. With the narrow aim of defending the 2020 election against voting-related mis- and disinformation, it bridged the gap between government and civil society, helped to strengthen platform standards for combating election-related misinformation, and shared its findings with its stakeholders, media, and the American public. This report details our process and findings, and provides recommendations for future actions.

Who We Are: EIP and Its Members

The Election Integrity Partnership was formed to enable real-time information exchange between election officials, government agencies, civil society organizations, social media platforms, the media, and the research community.1 It aimed to identify and analyze online mis- and disinformation, and to communicate important findings across stakeholders. It represented a novel collaboration between four of the nation’s leading institutions focused on researching mis- and disinformation in the social media landscape:

This link is to a page with several links.  The reports are about how to identify disinformation and how to respond to it.

So what’s the problem with all of this?   Political speech is politicized speech – stating the obvious.  Since the left controls the information systems – any information coming from the right, that the left doesn’t agree with is considered dis-information.  So Americans who lean to the conservative side are being de-platformed and banned for what is political speech.  That’s completely unconstitutional and un-American.   The fact that the Atlantic Council is a “partner” in the Stanford project is a big clue that when you cut through the layers of BS, what we are looking at in terms of an elections system takeover is that it is a global system and that doesn’t even consider the fact that NATO just moved into the Norfolk Naval Air Station.

It’s looking to me like the communists won and they did it without firing a shot.  Why do I think they won?   Because our politicians won’t even acknowledge the fact that there is a war on our country and that communists are crawling all over us while our country is being invaded.  Hello?   Anybody home?    Guess not.