The United States is a host nation for refugees and now we understand that squatters who enter a country in some way – legal or illegal, can be declared “urban refugees” simply by presenting themselves at a UNHCR office with a sob story about how they would be persecuted if they were to return home.

UNHCR’s partner, Manpower, Inc. can then make a significant chunk of money by getting the “urban refugees” to sign an employment contract and UNHCR can then push them through the pipeline of refugee resettlement at the expense of the American people. And all of this occurs behind the HHS Shield of Tragedy so that if you question anything, you are made out to be a heartless monster. So be it.

Continuing with the 2014-2015 Framework of Cooperation that was signed between the State Department’s Bureau of Population, Refugees and Migration and the Office of the United Nations High Commissioner for Refugees that was referenced in Part 1, the following are some excerpts – emphasis added and keeping in mind that the United Nations High Commissar of Refugees was the President and Vice President of the Socialist International from 1992-2005, the following are the shared values between the State Department and UNHCR:

PRM and UNHCR will work together to achieve, by the end of 2015:

a) Continued progress in the application of the Age Gender and Diversity approach (AGD) through improved protection for vulnerable persons. This includes an increased emphasis on ensuring that protection of women and children, including addressing Gender Based Violence (GBV) at the onset of emergencies, is prioritized;

b) Advancing solutions for refugees, including resettlement, particularly for those in protracted situations;

d) Addressing UNHCR’s funding shortfall in its global biennial budget by 25% by the end of 2015; and

A copy of the Age Gender and Diversity approach was found on the UNHCR website. Cutting through all the verbal b… loney, what they are really talking about is gay marriage, gay rights, transgender rights, women’s rights, etc. We know that they are actively operating in Idaho to promote these policies of deviance because of the “Add the words” campaign at the capitol last summer. Just recently, we found that these people are also active in Priest River, ID, because the local school board just approved a transgender policy. There is also an economic development corporation  operating there. That would seem to be a non sequitur but as you will see in the next section, it’s directly related to the entire scheme – a “transformative agenda” which this writer defines to be reverse colonization – 3rd world colonization of a developed country, cultural destabilization and “war in the context of everything else”.    More reading about the LGBT agenda can be read in the UNHCR’s Forward Plan

Continuing with the 2014-2015 Framework of Cooperation

UNHCR continues to develop policies to address the changing nature of displacement (especially with regard to urban refugees and mixed migratory flows)…   The United States, along with other key donors, places great importance on the UN’s Inter-Agency Standing Committee (IASC) efforts at humanitarian reform and will continue to track developments and progress with the cluster system. Of particular importance is UNHCR’s new refugee coordination model, which will interface with the IDP cluster system, enhance inter-agency collaboration, and ensure the needs of all populations of concern are met, while at the same time preserving UNHCR’s mandated responsibilities for the protection of refugees and stateless persons. Under the auspices of the Transformative Agenda…

PRM will support UNHCR efforts to increase the number of refugees referred for resettlement to all countries and to ensure that resettlement needs are adequately funded within the organization…PRM and UNHCR will work together to refine and launch UNHCR’s re-invigorated effort to achieve solutions for persons of concern. Building on lessons learned from the UNHCR-UNDP Transitional Solutions Initiative (TSI+) …UNHCR

The excerpts above from the 2014-2015 Framework were included to highlight in bold the key terms in the agreement because in the next section, there will be references to papers produced by think tanks and non-profits from other countries – specifically the United Kingdom (UK).

With the understanding that the pitiful people we see in pictures in refugee camps are not the only and are not the largest population of people who are considered refugees by the UNHCR, we have to dig a little deeper into this story of the “urban refugee”. A policy report titled Sanctuary in the City found on a UK website for an organization called the Overseas Development Institute (ODI), provides the following information (hyperlink added):

Policy is also changing. In 2009 UNHCR published a landmark statement on urban displacement which recognised the presence of refugees in cities and their right to assistance.6 The Inter-Agency Standing Committee IASC() Task Force on Meeting Humanitarian Challenges in Urban Areas launched a strategy in 2010 which sets out recommendations for improving urban response, such as promoting the protection of vulnerable populations and prioritizing the restoration of livelihoods and economic opportunities. Several large humanitarian NGOs have undertaken internal reviews of their urban programmes.7

In general there is reluctance to broaden humanitarian activities to encompass more developmental approaches. This is despite the fact that projects that foster self-reliance or encourage social integration are supported by existing legal frameworks and by ongoing initiatives in the UN system to improve the prospects for the displaced to find ‘solutions’. Approaches which involve the host state and promote self-sufficiency accord with the IASC strategy on humanitarian response in urban areas (Strategic Objectives 1 and 4), as well as the Transitional Solutions Initiative Plus and the UN Secretary-General Decision on Durable Solutions. Such approaches are also supportive of legal frameworks on displacement such as the Guiding Principles on Internal Displacement and the 1951 Convention relating to the Status of Refugees. Humanitarian actors increasingly call for development actors to assume the primary responsibility for responding to the needs of the displaced. There is no doubt that development actors should facilitate the inclusion of displaced populations in development plans and fund projects which would alleviate the strain they place on local services or open up protection space.9

Footnote 9 is a report produced by the Refugee Studies Centre, Oxford Department of International Development, University of Oxford. It is important to note that in the parlance of globalists, North symbolically refers to the alleged wealthy, developed countries and South symbolically to the poor, developing countries. It’s also important to remember that the United States is both a donor country and a host country for refugees.

Page 4 of the North-South report:

Development assistance has the potential to enhance the quality of protection through facilitating self-sufficiency for refugees and/or by opening up the possibility for local integration as a durable solution. In the past, most host countries of first asylum have been extremely reluctant to countenance self-sufficiency initiatives let alone to consider locally integrating refugees. They have generally argued for ‘voluntary repatriation as the preferred durable solution’, a position reinforced by UNHCR since the 1990s. It is therefore very difficult to persuade developing countries (with limited resources and a finite supply of arable land) to provide land, services, the right to work, or permanent residence to foreigners. Southern state politicians have legitimate concerns about self-sufficiency.

Although many Sub-Saharan African countries, such as Tanzania, allowed refugee communities to spontaneously self-settle in rural areas and offered land and integrated services in the 1960s and 1970s, this has become less popular over time. Following the structural adjustment policies imposed on developing countries by the International Monetary Fund (IMF) and the World Bank in the 1980s and 1990s, which encouraged a reduction in the size of the public sector through privatization and liberalization, many countries have had to reduce the public services they are able to offer their own citizens, let alone non-citizens. Meanwhile, democratization has made Southern state politicians more accountable to a public that sees few benefits in providing self-sufficiency or local integration to refugees (Milner 2009).

Targeting development assistance to refugee-hosting areas has the potential to improve refugee protection and possibly to enhance access to durable solutions such as local integration. Such assistance requires an integrated community development approach, which benefits not only refugees but also local host communities. If applied in this way, it can overcome many of the practical and political causes of long-term encampment. Such an approach would involve funding integrated services in areas such as health and education, investing in livelihood opportunities for both refugees and host communities, training refugees to become ‘agents of development’ rather than burdens on their host countries, and developing infrastructure in refugee-hosting regions. Aside from its practical implications, targeted development assistance can be shown to be in the interest of the host government as it moves beyond encampment and considers self-sufficiency and local integration. Democratically elected developing country governments could make the argument to their electorate that hosting or integrating refugees as part of the wider community represents a benefit.

The model proposed by this brief is a simple one. It involves Northern states offering significant additional, integrated, development assistance to host countries of asylum that meet the needs of both refugees and citizens. In exchange, Southern host countries move beyond the encampment of refugees and provide self-sufficiency or local integration to refugees. This section outlines how such a model can meet both Northern and Southern interests.

To cut to the chase, economic development money is being used to bribe domestic local officials in rural areas to accept and allow refugee settlements (colonies) within their own local areas. The colonization includes the establishment of businesses to produce jobs for the refugees using economic development, SBA, direct federal money, and the funds of VOLAGS – with no benefit to taxpaying citizens because the bills for building infrastructure for these businesses go to the taxpayers while the jobs go to the “refugees”.

Because this is a government sponsored fifth-column subversive operation, “urban refugees” are being placed into positions of power and influence in the communities as evidenced by Twin Falls Police Chief (name) informing the people attending the CSI Community Forum that five “refugees” have been hired by the Twin Falls Police Department. Also, when Obama came to Boise to speak, one of the people interviewed by TVOI News was a Palestinian who was working for the Idaho State Department of Environmental Quality and they are the agency that is enforcing the EPA’s Clean Water Rule that threatens Idaho Farmers as well as other American businesses.   (Note: “Rules” are easy to change after the major of American farmers go under – and “refugees” take over the farms. That seems to be the pattern across the country).

This isn’t refugee resettlement. It is an occupation that is being marketed as refugee resettlement. Apparently, obvious lies are easier to countenance than facing the truth of the betrayal. It’s an occupation because these so-called refugees are not arriving in Idaho of their own volition. They are being placed here by a SOCIALIST NETWORK.  They are not starting businesses with their own money, talent and initiative. And they are not earning jobs in the public sector, they are being given jobs in the public sector. And they are being placed into jobs of civic power and influence. That’s the difference.

Side Note:  After the bombing of the Murrah Building in 1995, Bill Clinton initiated the “Critical Infrastructure Protection” program.  This program has caused cities and towns all over the country to implement technology-based systems to control our critical infrastructure.  That created a lot of new jobs – that did not go to American citizens.   Think about it. 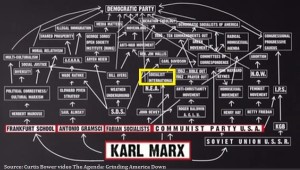 The Agenda:  Grinding America Down