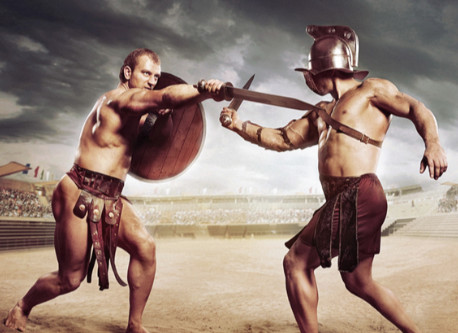 Battle of Ideas and Systems

Don’t ever let it be said that America won the Cold War.  We didn’t.  We lost. Why do I say that?   You could start with the speech that Joe Biden just gave in front of a demonic background reminiscent of Nazi symbolism.  He declared war on half of America.  But it would be more accurate to say that the fact that we are battling for the heart and soul of America is a loss in itself even if we ultimately succeed at taking back our country.  It will never be the same.  It will take a century to undo the damage they’ve done.

We, the civilians have been fighting a war that we didn’t even know was declared.  It’s an asymmetric war.   The great game – Battle of Ideas and Systems began with an offer of a competition and the acceptance of the offer with radical environmentalism and the economy as the battlefield.

Offer of a Challenge 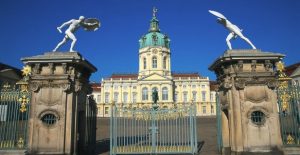 Competition of Ideas and Systems

Acceptance of the Challenge

As you listen to Mikhail Gorbachev’s New World Order speech, listen for him to set the terms of the competition (or you can read them)  keeping in mind that the competition was not among nation-states.  It was set up as a People’s Competition – a People’s War.

The following is the timeline for the set-up:

November 8, 1989 – Thatcher speech at the UN, proposes the IPCC to be located in the UK.  In a paper on the IPCC website, History section, there is a report titled Response Strategies.  Page 4 of the introduction is the following:

To accomplish these tasks in the most efficient and expeditious manner possible, the IPCC decided to establish three Working Groups to deal with each of the tasks identified above. The IPCC agreed that the three working groups, on science, impacts, and response strategies, would be chaired, respectively, by the United Kingdom, Soviet Union, and United States.

November 9, 1989 – Berlin Wall breached and East German troops guarding the wall were told to stand down.  (Who was at the Wall that day?  The KGB maybe?)

You’re called upon to deliver recommendations which strike a difficult and yet critical international bargain: a convergence between global environmental policy and global economic policy, a bargain where both perspectives benefit and neither is compromised.

Clearly, strong economies allow nations to fulfill the obligations of environmental stewardship. Where there is economic strength, such protection is possible. But where there is poverty, the competition for resources gets much tougher; stewardship suffers.

While from country to country conditions differ, we know now that our challenge is to consolidate democracy and accelerate development. That means advancing the intellectual revolution now sweeping Latin America, a movement away from stale statist doctrines; away from dictatorships of the right and the left; toward democracy, free government, free enterprise; toward the true political and economic empowerment of the people themselves.

Battle for the Soul of the Nation 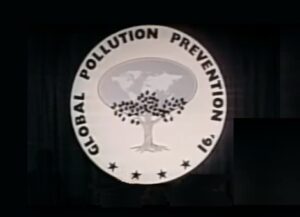 In just a few moments, Secretary of State Baker and Foreign Minister Shevardnadze will also sign four important new agreements concerning maritime boundaries, ocean studies, civil aviation, and a long-term grains agreement. Minister Shevardnadze and Transportation Secretary Skinner will sign a fifth agreement on maritime transportation. President Gorbachev and I are also signing a commercial agreement and are looking forward to the passage of a Soviet emigration law.

. . . President Franklin D. Roosevelt half a century ago spoke of a world in which four essential freedoms will triumph: freedom of speech, freedom of worship, freedom from want, and freedom from fear. And this ideal has not yet been attained in the world, and it could not be attained in the world of animosity and confrontation. And therefore, while liberating the world from fear, we are making steps towards a new world; and this is the important work of our two nations, of our two peoples.

This video would have been produced sometime around 1990 because it mentions legislation in Congress that would have been the Intermodal Surface Transportation Efficiency Act (ISTEA) of 1991.  It isn’t stated, but is implied by the program plan that the High Performance Computing Act of 1991 was an essential element to the paradigm shift in transportation systems.   Notice that he mentions four freedoms in the Bill of Rights.  This is an obvious implicit reference to FDR’s four freedoms – not the Bill of Rights.  It’s very clever embedded messaging that the insiders would catch but the majority of people would not.  Mobility as a fifth freedom connects Bush’s remarks on the bilateral agreements with the transportation agenda.

Remarks by The Honorable US Secretary of State James A. Baker III at the APEC Opening Session

Overview of World and Regional Developments

We have three aims for this Ministerial. First, we hope to give further impetus to the work program, including on the subject of transportation which we have proposed should be added to the program.

June 02, 1990 – Soviet-United States Joint Statement on the Environment During the state visit of Mikhail S. Gorbachev, President of the USSR, at the invitation of George Bush, President of the United States, the two sides affirmed their serious concern about the health of the global environment, and their commitment to expand U.S.-Soviet cooperation in the field of environmental protection and the study of global change.

On other bilateral matters, they also pledged to facilitate contacts and cooperation between their respective non-governmental environmental organizations.

We, the American people were led to believe that the Soviet Union fell because they were bested by the capitalist economic system in the United States.   What we know now is that all the international agreements that were signed across all administrations since the 1970’s were about harmonization of systems in preparation for global government.   The result of this harmonization between the United States and the Soviet Union is a basterdized system of communism.  The harmonized system is capitalist (fascist) led communism.

The two sides reiterated their commitment to the program of technical economic cooperation outlined by Presidents Bush and Gorbachev at Malta in December and expressed a desire to expand the scope and number of joint projects. This program is a concrete expression of U.S. and Soviet commitment to work together in support of economic perestroyka. Its goal is to advance the process of market-oriented economic reform by sharing experience and expertise regarding the problems and opportunities involved in building market structures and institutions.

A technologically-created “market” is an artificial construct.  It is a mediated market – management through the use of technology.   It’s a hybrid of capitalism and communism.  Winners and losers are selected by the market managers that are  behind the curtain of technology.   See Enron – PG&E story, 2001.

Document of the Conference on the Human Dimension of the CSCE, Copenhagen 29, June 1990 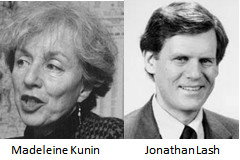 1988: Gov. Kunin chaired the Environment Committee of the National Governors Association where she created the climate change task force.

1989: The State of Vermont helped organize the first international conference on sustainable development in North America. Kunin was the first U.S. governor to promote the concept.

Both Madeleine Kunin and Jonathan Lash were appointed to Bill Clinton’s Council on Sustainable Development in 1993.  They led the implementation of communist, community central economic and environmental planning in the United States.

Out of these troubled times, our fifth objective—a new world order—can emerge: a new era—freer from the threat of terror, stronger in the pursuit of justice, and more secure in the quest for peace. An era in which the nations of the world, East and West, North and South, can prosper and live in harmony. A hundred generations have searched for this elusive path to peace, while a thousand wars raged across the span of human endeavor. Today that new world is struggling to be born, a world quite different from the one we’ve known. A world where the rule of law supplants the rule of the jungle. A world in which nations recognize the shared responsibility for freedom and justice. A world where the strong respect the rights of the weak. This is the vision that I shared with President Gorbachev in Helsinki. He and other leaders from Europe, the Gulf, and around the world understand that how we manage this crisis today could shape the future for generations to come. 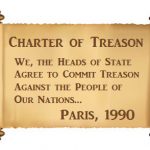 Of course a People’s War would focus on Community – beginning with Community Policing in 1991 which could be called Community Gangster Empowerment – because they have human rights too.

A new organizational power structure using technology means a complete re-organization of government.  That’s what Clinton and Gore did.  They trashed the American government and replaced it with the fascist-led communist government.

In 1993, when Clinton and Gore took office, they began almost immediately to work towards the conversion of the American system of government to the hybrid capitalist-communist system.

The programs for domestic economic and social development were and are the weapons in the Battle of Ideas and Systems.  This is how we came to have marxists embedded within our local governments.  Understanding the strategies as they were defined during the Clinton-Gore administration is the key to understanding the fascist-led communist conversion of American communities. 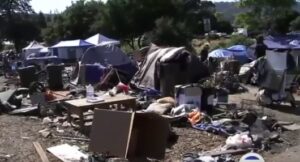 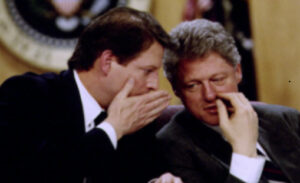 This is no where near the end of the story but it should be enough to get your mind in the right frame for what actually happened to our country.  It didn’t start with Biden, Trump, Obama or even George W. Bush.  It started with a competition – a competition not between nation-states but between people in borderless territories.  People as gladiators with the wealthy sponsoring their champions for the destruction of civilized society.